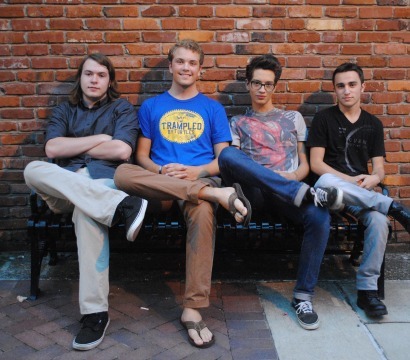 Sometimes fate dictates a Rock n Roll situation that never could have happened any other way. With members originally from Tennessee, Kentucky, and California, it was Music City USA that brought the four members of Some Assembly Required together. With influences ranging from Led Zeppelin to The Foo Fighters, band members Tanner Marion, Joseph West, Jake Easter, and Anthony De La Rosa create a sonic musical experience that transcends far beyond their years. Formed in early 2012, the band won first place (band category) at the Hendersonville Talent Gala. They were selected by Samick Music Corporation to participate in the Samick Summer Music Workshop, a music coaching and developmental program targeted at teaching teen bands the elements of musicianship, leadership, and music business skills. The band has several show schedule through the Spring/Summer of 2014, including the Rocketown High School Battle of the Bands

Tanner Marion – Vocals/Guitar
Tanner is a cool, fun loving and creative 17 year old from Hendersonville, Tennessee. He’s been singing for about two years and continues to hone his guitar playing chops as the second guitar player in the band. Tanner’s diverse musical taste includes rock, metal, alternative, and grunge, and he sites Dave Grohl as one of his primary musical influences. Aside from playing music, Tanner is an Eagle Scout who enjoys camping, hiking, and cycling. When it comes to indoor sports, you’ll find Tanner in his ‘Man Cave’ bedroom with a video game controller in his hand and a few good friends at his side. Someday the energetic front man hopes to sing and play guitar for a living, but his immediate plans are to finish high school and go onto college.

Jake Easter – Bass/Vocals
Known as the ‘tall, soft spoken’ guy in the band, Jake’s thunderous bass playing is quite an offset to his gentleman like demeanor. The 16 year old Hendersonville, Tennessee native has been playing bass for about four years, and while he enjoys playing rock, he has his sights set to expand into Jazz and Classical music one day. Outside of being half the rhythm section for SAR, Jake likes reading, drawing, Boy Scouts, and discovering new music that nobody has heard of. His musical influences include Foo Fighters, Coldplay, Snow Patrol, and Imagine Dragons. Jake eventually wants to get into music production, but for now finishing high school is his top priority.

Originally from Lexington, Kentucky, Joseph is not your typical 'laid back' drummer by any stretch of the imagination. His seemingly endless energy is a driving force in SAR's sound and stage show. Sighting Dream Theater's Mike Portnoy as a main influence, the 17 year old keeps healthy with a steady diet of progressive metal from some if his favorite bands including Tool, Tenacious D, and Iron Maiden. When he's not 'beating the skins' Joseph is into Anime/Manga and playing video games. He plans to one day make a living playing music, but for now he's working on finishing high school and going to college.

Anthony De La Rosa – Lead Guitar/Vocals
At 15 years old, Anthony is the youngest member of SAR and has been playing music since he was about five years old. Shy and quiet, the wild side of his personality comes out when he has a guitar in his hands. With influences such as Jimmy Page and Randy Rhoads, Anthony plays with the style and soul of a guitar player twice his age. When he’s not playing music Anthony likes art, video games and Boy Scouts. Anthony plans on pursuing music and art for a living and one day plans to make his way back to his home state of California. Of course, like the rest of the band, his immediate plan is to finish high school and go onto college.

Catch us at the Rocketown 2014 High School Battle of the Bands!