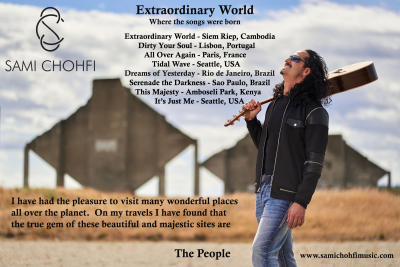 While much in Sami’s life has evolved, one thing that has never changed is that he belongs to the world of music. At the age of 14 Sami heard Nirvana’s “Smells Like Teen Spirit” and immediately started pleading with his mom to buy him his first electric guitar. Chris Cornell, Radiohead, Stone Temple Pilots and The Smashing Pumpkins continue to be some of Sami’s greatest influences.

As a songwriter, Sami finds inspiration in many different ways; occasionally his songs even come to him in his dreams. His versatility as a musician can be seen in the two different styles of touring he is currently engaged with. In his solo acoustic performances, Sami is a master at connecting with his audience taking them on a soulful journey through love and tragedy, always leaving them with a ray of hope. In contrast, his high-energy performances with his melodic rock band, Blue Helix, have the audience on their feet, moving with the pulse of the music. His ability to connect with his audience, whether acoustic or rock, is truly magical.

Sami demonstrates his prolific songwriting prowess and his ability to find hope in the midst of struggle on his debut solo album, Extraordinary World, which is set to release in June of 2020. Sami is currently on tour traveling to many parts of the world playing material from his upcoming release. The songs on his new record were written from places all over the world, from Paris to Siem Riep, Sami continues to spread his music to people all over the globe.

Sami has recently performed in the US, India, Brazil, Japan, Cambodia, Armenia and the Philippines

Join Sami Live on the Air on one of Sao Paulo, Brazil's best Rock radio stations 92.5 Kiss FM August 1st at 9pm. Sami's song "Anodyne" will be featured live on the air during the interview.

Sami will be back in Brazil in August 2019 for his second tour. He will be accompanied by Brazilian National Band Mr. Legacy .They will be playing 5 dates together featuring songs from Sami's upcoming debut Album, as well as fan favorites from his Blue Helix catalog.

Contact Information
For booking or general questions please feel welcome to reach out to us. We would love to talk to you.
Information Request