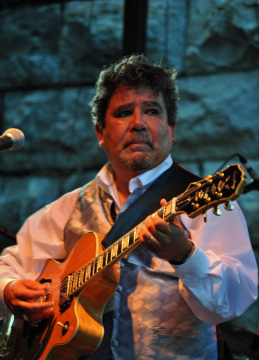 Every now and again, one discovers an uncut gem amongst the musical rubble. A gem formed from the dust of sacrifice, creativity, and passion. Originally a native of San Antonio, Rafael Vasquez grew up in the sun scorched Southwest--spending his youth driving across the back roads of Texas. “I remember sneaking into small cantinas and clubs, places where beer mixed with the smells of simmering rice and beans, just to hear music.” During his youth, he learned from the local masters of Latin music by listening and teaching himself the guitar technique that many find amazing.

Currently residing in Nashville, Tennessee, Rafael continues to fuse Latin Jazz with the broader adult contemporary market--taking the reigns as a leading Latin artist in Music City. His music is a unique combination of the fiery guitar lines of Santana, the classical technique of Andreas Segovia, and the soulful and gritty vocal sound reminiscent of Sting. This compelling blend of jazz, blues and rock has created a new and popular sound that combines the best of salsa, Latin jazz, and rock, perfect for the emerging Latin pop/jazz genre.

Rafael’s newest musical project, El Cine del Corazon (the theater of the heart), soon to be released on Indiebandhub.com, is the culmination of a lifetime of experience. A joint project between Acklen Entertainment and Belmont University, the collection contains an eclectic range of styles—from flamenco guitar to classic Latin rock with “smoking” guitar solos. In tribute to earlier American Roots musicians, El Cine del Corazon was recorded in Nashville’s historic RCA Studio B, where musical greats such as Elvis Presley, Chet Atkins, Roy Orbison, and many others unfolded their historic musical journeys. In the evocative song “En Panama,” we learn of two separated lovers, living countries apart, lamenting how life goes on, even though they are still bound together at the heart. In “El Sabor”, we hear of the ”taste” of passion that two can feel through a lifetime of shared experience. El Cine del Corazon, projects a series of stories, similar to the films of his youth, filled with musical tales of love, life, hardship and laughter.

Over the years, Rafael began his story as a member of several renowned Tejano bands, including Sunny and the Sunliners, Little Joe y la Familia, and Augustin Ramirez. From an early age, Rafael gained experience on the road, eventually signing to a major label and winning a Grammy award with Little Joe y La Familia. After his eventual marriage and children, Rafael made the difficult decision that family came first, and relocated to Nashville, Tennessee; pursuing the local music scene while stabilizing his home life with the typical “day job.” Sacrificing his music for his family, Rafael emerges anew as an artist; with a carefully crafted sound and new band--the San Rafael Band—achieving swift recognition and opening for acts such as Michael McDonald and Kevin Eubanks.
Rafael’s passion extends far beyond his music. After supporting his own family through the hardship of his wife’s struggle with cancer, Rafael re-energized his support of those in need. He is a passionate supporter of causes such as Gilda’s House, helping homeless children, and supporting of the local Latin music scene and the Hispanic community.

Vasquez connects his love of life with his music. Never straying far from his Hispanic roots, Rafael dreams of one day performing in the shadow of Texas’ historic Alamo. “If I could play anywhere in the world, I would be honored to play in front of the Alamo. I have risen from humble beginnings to achieve great things as a musical artist. I want to pay tribute to my heritage and my family in San Antonio, whose influence on my music will not soon be forgotten.” With a musical style rooted in his heritage, Rafael will continue to share his message with the world.

Arrington Vineyards with the San Rafael Band is coming back soon.