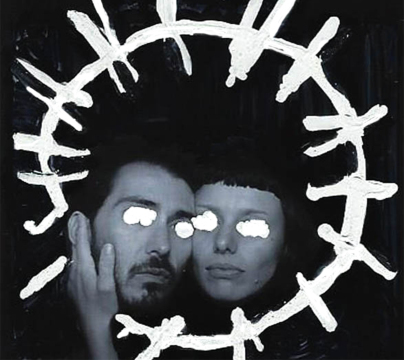 Songwriter, poet Dusty Santamaria met multidisciplinary artist Moira Ichiban on a full moon night in Portland, Oregon. They fell in love, bowed out of their urban lifestyles, and ran away together to form an art focused Rock n Roll band in the Southern California desert. The couple released their debut album, Love Under Will, on their own Voodoo It Yourself label in early 2018. They spent the remainder of the year touring the Western United States and Europe.

Dusty Santamaria + Moira Ichiban are currently recording their second album, slated for an early 2019 release and will begin touring again along the West Coast in September.

Review of "Love Under Will" for Roadtracks Magazine #52 Summer 2018

“Poet and singer-songwriter Dusty Santamaria and intermedia artist Moira Ichiban are not only lovers; with their debut album,"Love Under Will" they have created a musical collaboration that takes place in the climes of Alt-Country with influences from 60's Garage Rock, Rock n Roll and Doo-Wop. The result is a small masterpiece of Gothic Americana, which could easily serve as the soundtrack for a David Lynch film. The low playing time of the album, which has only 7 tracks, is completely counterbalanced by the high quality throughout. There is virtually no single weak point. Thanks to the ardent, deliberate songwriting, Dusty Santamaria and Moira Ichiban succeed in bringing out the best of their Voodoo-wop style without any cranky coolness.
This is the real shit!”

REVIEW OF THE SYLVIA SAYS EP BY DUSTY SANTAMARIA

Shakespeare and the Velvet Underground. Shaken, not stirred. The cityscapes that Dusty Santamaria conjures up are refuges for both refuse and revelation where the low and high aspects of our spirits (and, by extension, our culture) co-mingle in a lovers’ dance. His songs, poetry, and paintings are filled with religious imagery, classical references, and the smoky, yellow light that spills into the street, bubbling up from the bottom crust through the cracks in the fabric of our society. “Symbols, images, and surrealist dreams- My Mind’s a junkyard,” Dusty laments in “Shiverin, moanin, shaking, stoned,” the second song on the Sylvia Says EP. The characters that inhabit Santamaria’s cityscapes are restless, plagued by vice, and haunted by an impending sense of emptiness. Everyone is looking for an escape though they know they must return to the emptiness. Everyone is looking for meaning though they know modern reality is cruel and mechanical. Above all, everyone is looking for love… with only fleeting moments of tenderness afforded.

Musically, the Sylvia Says EP is one of those fleeting moments. The sounds are generally soft and soothing, focusing mostly on Dusty’s acoustic guitar and voice. It’s over too soon. Dusty’s voice is relaxed and familiarly conversational at times, passionately precise in diction at others. But it’s the simplicity of the first line that sets the tone for the album. “Bring a little water, Sylvia,” Dusty offhandedly requests. The narrator’s fondly familiar relationship with the character Sylvia is evident in the absence of formal politeness and the way he pronounces her name, almost completely dropping the last letter “a” and turning a three syllable name into two. The request itself is a simple one. He’s not inconveniencing her, and he’s not expecting much. The listener (and the reviewer), however, should be careful to avoid the trap of attaching meaning to the symbols and images- sometimes beautiful, sometimes violent- that permeate the music. Santamaria makes it clear from the start that this sort of analytical appropriation is a cop out and will be in vain because the symbols themselves have no continuity of meaning. They are just the static of an active imagination prone to nostalgia. For example, the water of the first verse, a symbol of life, is immediately turned on its head in the second verse when “some sleepwalking guru that guided me here just jumped into the river and died.” It’s not the first time Dusty’s started off an album with a river of death. His 2014 release Now That I’ve Stopped Killing opens with this verse:

Where fear is a law, confusion’s a creed, and apathy wears a crown

I took the blood, the filth, and the slime and painted myself as a clown

Then took the midnight train into infinity

and never turned my head to look back around

While Dusty’s music is heavily influenced by country and traditional folk, his soul has always struck me as being at home in pure urban chaos. I often think of him when I’m in the seedier downtown parts of a city. It seems to be in his nature to see beauty and possibility where others see starkness and entrapment. Part of this lies in his willingness to be struck by the smaller things in life such as on “Haunted Feeling” off the Sylvia Says EP where the narrator is driven to “pick a flower from the garbage.” The apparent reference to Leonard Cohen’s “Suzanne” here doesn’t seem to be something Santamaria is trying to shy away from. The album has plenty of lyrical references to other songwriters, most obviously Lou Reed and the Velvet Undergound as one might have already guessed from the title of the EP. Like the symbols and classical references, one gets the feeling that the lines from songwriting royalty are just what’s passing through his head. He puts them down in order to move the songs along, in order to get to the lines only he could write that are what make his music truly worth listening to. It almost seems as if he’s just observing his own thoughts without attaching to them or, for that matter, attaching to anyone else on this album.

The last song on the EP, “New Year’s Night,” is an ode to the road Dusty seems to know is his only home. The backing “doo-wop” female vocals and the simplicity of the songwriting serve to bring this EP back full circle. The whole thing seems very intimate. There is a sadness about the things he knows he misses out on by choosing the path he does, but even through the teardrops there is the brightness of someone living the way they want to.

Overall, this EP is not a drastic change from the rest of Santamaria’s catalogue. His previous release, Now That I’ve Stopped Killing, had a few songs that were written in more of a linear, confessional style. Those types of songs like “Rose Tattoo” or “Dark Eyed Girl” are absent on the Sylvia Says EP, but, despite that, this EP feels a bit more intimate. It also moves along well and doesn’t drag. There’s some rockers on here like “Underground (Party Dress).” It’s a well-written, well-rounded, and well-recorded EP from a mature songwriter who’s really found his stride and surely has more good things coming down the road.

Portland Is Losing Dusty Santamaria, the Greatest Enigma It Never Knew It Had

Dusty Santamaria saunters in from the rain—guitar slung over his back, black nail polish on his fingernails—and approaches the candlelit table at the Liquor Store. Before he can sit down, he comments on the Blur song booming through the room from the overhead speakers.

Before we can make introductions, or even shake hands, he's delicately addressing the situation with the young woman tending bar. He motions to the surrounding shelves, stacked with vinyl records and the idle turntables. When he finally takes his seat, red wine in hand, the Velvet Underground's "Sunday Morning" comes on, and Santamaria is swaying back and forth in his chair, arms raised in a "hallelujah" pose.

"It's funny that we're doing this now," he says, still grooving. "I'm moving to Los Angeles in a week."

He continues unprompted: "The working poor in L.A., I really resonate with. I need that around me in order to thrive. There's so much soul in that community. I love so much about Portland, so much about Oregon, but it's complacent. It is. I don't think anyone could argue that."

Over the next half-hour, Santamaria talks about growing up in Rainbow, Calif., among the Mexican migrant community, living his childhood mostly in his imagination, then seeing the Cramps at age 15 and feeling enlightened. He moved to New Orleans in his early adulthood, toured the country with his band, the Commercial Rockstars, published two books of poetry and painted two gallery shows. Upon moving to Portland, he befriended local poet laureate Walt Curtis, toured with his best friend Galen Ballinger as the Singing Knives and drove a graveyard-shift cab until Uber demolished the local taxi industry. He's eked out a living with gigs around town, where the usual compensation structure is a gratuity-based style.

Strange as he may seem upon first glance, the guy is nothing if not an artist, and everything most folk singers claim to be—at least as origin stories go.

Santamaria has released two solo albums, Existential Detective Rock n Roll and Now That I've Stopped Killing… Vocally, Santamaria's closest analogue is early Dylan, but the instrumentation is more a Southern-Creole-voodoo hybrid. Melodic lines follow well-tread territory from the bourbon- and Beaujolais-splattered American Songbook. It's possible his appeal is best conveyed in person, because while it's palpable listening to his records, it's not nearly as overt as when you hang out with the guy. It seems tragic we're about to lose him.

"I've always had one foot in and one foot out in Portland," Santamaria says. "I've written a lot of songs at this point, and I don't have a lot of national recognition or anything, but I feel like I have a pretty good catalog. I'm an oddball artist, and this is what I think I can do to help others."

He pauses to take a sip of wine, then exclaims: "Los Angeles! Yeah, there's somebody I want to study under that lives down there. A guy that's really involved in chaos magick."

I ask if he's always looked for a mentor when moving to a new place, and he nods and chuckles: "We're just the residue of all that's come before us. I've had heroes, yeah. I think I am my hero."

So It Goes Coffee House

So It Goes Coffeehouse

THE WITHERS
have a diverse sound that incorporates elements of soul, 60's girl groups, garage, funk, and psychedelia. With catchy hooks, luscious and complex harmonies, and undeniable dance grooves
https://www.facebook.com/thewithersthewithers/

MONTY O"BLIVION
Experimental new wave, synthpop, post-punk musician out of Los Angeles, CA. Monty O'Blivion has been writing and performing with various DIY bands in the Arizona local scene for 15 years as a singer, guitarist, saxophonist, and keyboardist. He is the founding member of anarcho post-punk outfit, MSD.
https://www.facebook.com/m0nty0blivi0n/

THE GREEN DOOR
Western Psychedelic, not for the faint of heart
https://www.facebook.com/thegreendoorband/

RLLRBLL (PDX)
rllrbll is an art form whose medium is sound. Common elements of rllrbll are pitch (which governs melody and harmony), rhythm (and its associated concepts tempo, meter, and articulation), dynamics, and the sonic qualities of timbre and texture.
https://rllrbll.bandcamp.com/