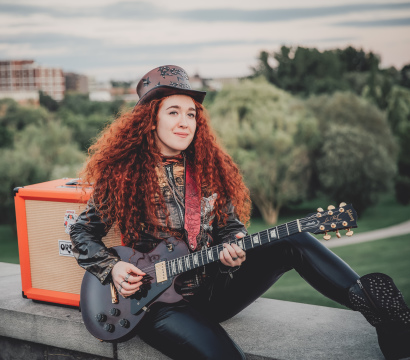 Sophia Radisch (born July 6, 1998) is a Canadian Professional Independent Artist. She is a singer/songwriter/musician and actor from Ottawa, ON Canada. She is a member of CFM/AFM (Canadian & American Federation of Musicians); SOCAN (The Society of Composers, Authors, and Music Publishers of Canada); SAC (Songwriters Association of Canada); and CARAS (The Canadian Academy of Recording Arts and Sciences).

She is a Gibson Guitar, Orange Amps and GHS Strings endorsee. She is sponsored by Whitney Howard Designs and American Hat Makers; styled by Ruby Roxanne Designs and Adam Rose Tattoo.

Sophia has made guest appearances at the Gibson Guitar/FOX5 Studios in Las Vegas, Nevada, and has performed at world renowned venues in Hollywood, California.

She performed at the Guinness World Record "Longest Running Music Concert by Multiple Artists," which was awarded in 2018 by The Guinness Book of World Records.

She has been called a "musical prodigy." She first hit the music scene at age 13, and has written over 200 songs. Sophia has numerous accolades: nominated as "Best Young Songwriter" in the Toronto Independent Music Awards 2016; regional semi-finalist for her single "Heatwave" in the Canadian Broadcasting Corporation's Searchlight Contest, "Hunt For Canada's Best New Artist 2014." And, she won the "Rising Star" award at the Canadian Wire Magazine Awards 2013. http://www.vevo.com/watch/sophia-radisch/heatwave/QMAXQ1400119

Sophia is credited with being lyricist, composer, vocalist, and rhythm guitarist on both her album releases INTOXICATED (released September 1, 2014) and BEAUTIFUL SIN (released January 7, 2016). She co-produced her second album, alongside Glen Drover, formerly of Megadeth fame. Glen is Producer and Guest Guitarist on the album. Shawn Drover, is Guest Drummer. Both, formerly of Megadeth fame.

"Hot Blooded," a single off her second album BEAUTIFUL SIN. It remained on the top 10 most played songs on the DRT National Airplay Rock Chart for over 8 weeks.https://www.youtube.com/watch?v=sD9XSBfzXxI

"...My songwriting tends to be soulful, sensual and fantasy-like in nature; driven by my passion for the guitar. I am influenced mostly, but not exclusively, by classic rock, alternative rock, R&B, Jazz and Soul. My music is an eclectic mix of genres, that is very alt rock/soul rock in nature. I follow my heart and intuition, and in this way, my musical gift speaks to me, and then I share it. And, that is how the creative process works for me..."

"Sophia's voice is tender, but it has a strength and passion of youth that will make you shiver! Each of the 13 tracks on "Beautiful Sin" is composed with smooth transitions and powerful rock hooks, and the lyrical content from this young woman is reminiscent of powerful female rockers. The new album also showcases a variety of rock and pop styles while retaining excellent continuity between tracks." Review by Kimberly Weiss, Band Reviews @ Music Connection Dayton

"Sophia Radisch is the kind of songwriter and performer blessed with a golden voice and universal appeal who understands her musical vision and brings an undeniable talent to the process. She's a joy for any listener to discover - a soul trader in genuine energy, aiming straight for the heart. Sophia turns a watchful eye to the pageantry of emotion, the drama of love and the mysteries of everyday life with a disarming mixture of sincerity and cosmic insolence, unapologetically romantic, spinning golden threads of lyric and melody, each inflection and melisma planned and considered, each word tailored for meaning and effect. She delivers it all with carefree charm and nearly divine intuition. Her voice, at times so ethereal, is shot through by strength and sinew and just a hint of transient grit. The feeling is cut deep, leaving any listener thunderstruck and enchanted." Review by Rick Jamm, The Independent Music Magazine

Composed at the tender age of 13, Sophia's original composition "I Can" was accepted into the Ottawa International Music Video Competition on August 19, 2012. It received great reviews by the panel of professional judges; including one judge announcing that "Sophia has a brilliant voice with a bright future ahead of her in the world of music." https://www.youtube.com/watch?v=z3QPwXtIU9Q

Her music is aired internationally; on regional and local radio, terrestrial airwaves, internet radio and satellite radio. She has conducted interviews and performances on radio and television, and been featured in many music and entertainment magazines. She has toured across Canada, in the USA and in the UK. She is an MTV/VH1/VEVO Artist. Sophia has worked as a stage and film actor.

Her original scores have been used in film, TV and commercials; and continue to be requested. Her original composition "Rain" was used in the Feature Film Thirteen Downs, as she performed her original song, in character. Sophia has been cast, many times, as a lead actor, in theatrical productions, short films, commercials productions and a feature film. In the feature film "Thirteen Downs," she is cast as the lead character. The film premiered and opened The Canadian, Ottawa International Film Festival 2012, on August 16th. https://www.youtube.com/watch?v=MUxJzZPrgXE

The PSA "The Helping Hand" won a short film award in Toronto; one of Canada's major music and film cities. Sophia was cast as the lead character; a short film on anti-bullying. http://www.youtube.com/watch?v=AiEdFZuJMFM

In the Short Film "Home Coming," Sophia was cast as the lead character. The film won 3rd place Audience Choice Award, at the Digi 60 Film Festival. It was released January 13, 2012 at the Ottawa International Film Festival.

Hey Rockin' Friends! It's back to school of rock! I had an epic live off the floor recording session at The Bell Tower. It was a great thrill to be back in the studio! This was filmed during the ongoing pandemic. Long live rocknroll. I hope you enjoy this video of my song “Ignite”. Sending you much love, light & rocknroll blessings! Thank you for your amazing & continued support for me & my music. Check it out: https://www.facebook.com/watch/sophia.radisch/735729270600625/
Songwriter(Lyrics & Melody): Sophia Radisch
Engineer: Davis Maxwell
Session Players: Joey Muha, Anthony Caetano, Greg Marco
Video: Cam Schwartz #canada #rocknroll #orangeamps #gibsonguitar#ghsstrings #orangeampsartist #gibsonartist #ghsartist #redhead #rocker#thebelltower #recordingsession #live

Hey Rockers!
It's an absolute honour & privilege to have been interviewed by one of my latest sponsors, #ConcertTease! Looking forward to being styled in epic & legendary ROCK 'N' ROLL wardrobe, designed for musicians & music lovers alike! Long live rock 'n' roll! I Loving my Concert Tease fam!

I am honoured and humbled to be "the face of Grindrod Amps 2017!" Thank you for your support friends! Peace and Love and Rock n Roll! Looking forward to NAMM 2017 with this fine Team! -Sophia

VIA Laura Patterson @ Star 1 Entertainment Group http://www.star1group.com/
"WOW!! What a jump in the charts for Sophia Radisch !! From #20 last week on the Top 50 National Airplay Rock Chart all the way up to # 10!! Check out her chart-topping single
"Hot Blooded" at http://star1ent.com/sophia-radisch

The Edge On Air Radio Interview with Sophia Radisch

WM WEBHOST MAGAZINE-"Musicians That Rock The World" on Sophia Radisch

Sophia Radisch is honoured to be performing in Concert
@ the Musideum
A World Of Musical Instruments
401 Richmond St. West
Suite 133
Toronto ON Canada

Sophia Radisch Interview by the Herald Unplugged on PEMBS.TV with a performance of the acoustic version of Heatwave, a single off Sophia Radisch's INTOXICATED debut album.

Flimed at Megagroup Studios for the Herald Unplugged.

INTOXICATED is available for purchase here:

"Semi-Finalist" in the CBC Searchlight Contest for Canada

Sophia won the "Rising Star" award at the 2013 Wire Awards in Peterborough ON Canada, and has been featured as a Guest Performer on Roger's TV Ottawa ON Canada & Cogeco TV in Toronto, ON Canada.

Musideum - A world of Musical Instruments Toronto, ON Canada

Sophia Radisch is honoured to be performing in Concert
@ the Musideum
A World Of Musical Instruments
401 Richmond St. West
Suite 133
Toronto ON Canada

""When The Lights Go Down" @ Studio Bar Toronto ON Canada

The Rockpile Toronto, ON Canada

Sophia Radisch concert @ The Tavern at the "A" Pittsfield MA USA

Artists/Bands of all genres are invited to participate!
For more information visit www.deirdremallehe.com

The 120 Diner, Toronto ON Canada

Donations/Raising Funds https://www.vegasrising2017.com/
for the Victims and families directly involved in the Las Vegas shooting

Sophia Radisch, Opening for the "Darkest Side Of The Moon" Pink Floyd Tribute Act. The Rockpile, 5555 Dundas Street West, Toronto ON Canada 8pmEST
Get your tickets here: https://www.ticketweb.ca/event/darkest-side-of-the-moon-the-rockpile-west-tickets/8397765?pl=rockpilewest

Come see powerful front women ROCK the stage! Part of proceeds support indie film “Flames Of Fury”! $15 advance & $25 @ door! After party open stage from 12:30-2AM! Rock out with us! See you there!

Sophia Radisch @ Cherry Cola's, Toronto ON Canada Wednesday May 8, 2019 2:00am
It’s a great privilege & thrill to be performing at #canadianmusicweek 2019!

The Wheels on the Danforth Music Festival, Toronto ON Canada Saturday August 17, 2019 11:00am

“I believe the strength of this year's lineup is the depth of talent — we focused on casting a wide net, reaching out to a broad demographic of fans — some well-known 'flashes from the past' and an impressive slate of international superstars, to go along with many other established and emerging acts." -Mark Monahan

Repost from @ottawabluesfest:
“YOUR 2022 @rbc BLUESFEST LINEUP REVEALED!
Whether you transferred over your tickets from 2020, purchased your passes in 2021, or are just gearing up to celebrate with us at #RBCBluesfest2022 - thanks for your continued support! We can’t wait to welcome you back to LeBreton Flats Park this summer!
1-DAY PRESALE starts Wednesday, March 9th at 10AM”

Hey Friends!
I can’t wait to ROCK at Montreal RibFest 2022! It’s a great honour and thrill to be performing in support of the Big Brothers and Big Sisters of West Island in MTL.
This year, BBBS impacted over 40,000 youth in over 1,100 communities across Canada.
I hope to see you there! Thank you for your continued support, friends!
Sending you love, light & rocknroll blessings,
Sophia

Hey Friends! I’m so very thrilled to be a @cityfolkfest Artist in this years lineup. I’m incredibly honoured to be opening for @thebluestones & @theglorioussons on Sept 9th from 6-7pm! This will be an epic and legendary show! Sending you love, light and RockNRoll blessings.
Love,
Sophia
Graphic Art/Design by: Bailey Videcak