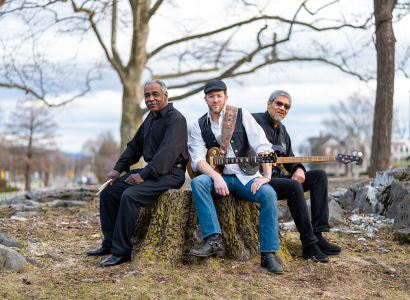 Southbound Steel combines the best of Delta Blues, Southside Chicago grit and Funky, Southern-fried Rock to produce their unique, American Roots Music sound. Drawing heavily on artists such as Muddy Waters, Son House and the Allman Brothers, the band brings long improvisations, and a Jam Band feel to the modern era. They create a musical space where the groove takes the audience on a journey right along with the band. Guitar/Vocalist Rick “Blue” Steele is a Virginia boy who began singing and playing Roots Music as a child. His musical lineage extends back to the legendary Robert Johnson through his mentor, national Blues recording artist Memphis Gold.

Steele began playing with local legends Charles “King” Solomon on bass/harmonica, and Morris “Ray Charles” Freeman on drums back in the 2000s. Both Solomon and Freeman are veteran musicians of the Mid-Atlantic music scene, and have toured nationally and internationally with various artists through the decades. The trio is a powerhouse with an old world vinyl feel combined incredible musicianship that is fresh and unique with each performance.

Southbound Steel has cut its teeth for over a decade now in various roadhouses, Biker bars, casinos and Festivals. They are currently working on their debut album of all original material to be released later this year.

A command performance at one of the most beautiful places to play music - Big Cork!!