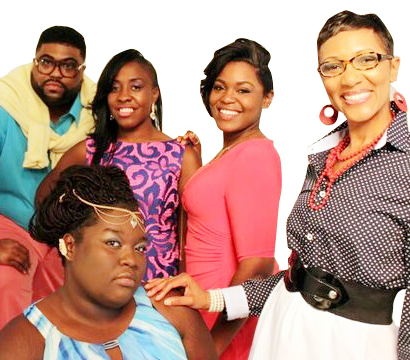 One listen to Steve Dalton & The Leviticus Singers of Charlotte and anyone within earshot knows that these young men and women are gifted vocalists. Continue to listen and it will be readily apparent that these psalmists have been anointed by God to usher believers into His presence. Delivering songs which flaunt diverse musical styles including praise and worship and contemporary Gospel music, Steve Dalton & The Leviticus Singers of Charlotte have mastered the art of passionate praise. Their unforgettable performances have placed in them in the company of Gospel notables such as Marvin Sapp, John P. Kee, Jonathan Nelson, DeWayne Woods, Micah Stampley, and Lexi. They have caught the attention of the industry netting an impressive 8 nominations for awards such as the 2015 Rhythm of Gospel Awards, the 2015 Independent Artists Christian Music Awards and the 2015 Prayze Factor People’s Choice Awards, winning the 2015 Gospel Image Award for Best Video of the Year for their new release, “I Win”. Now the ensemble returns with an updated rendition of the track, “I WIN, The Remix” featuring Stellar Award Nominee, Dove Award Nominee and lead singer for the award-winning Donald Lawrence & Tri City Singers, LeJuene Thompson & multi-Stellar Award Nominee Uncle Reece.

The founder of Steve Dalton & The Leviticus Singers of Charlotte grew up loving Gospel music. Bitten by the music bug at an early age, he learned to play the saxophone, flute, keyboard and drums before he was 11 years old. While still a youngster, he was tapped to direct the orchestra, the church choir and ultimately became part of the Church of God In Christ’s national orchestra. At 19, he became minister of music at his home church.

While a part of a conference choir in 2002, he was given the inspiration to start his own singing aggregation. His vision manifested with the formation of Steve Dalton & The Leviticus Singers of Charlotte. Much more than just singers, these young people have a special calling which is evidenced by their name. Dalton says, “I believe your destiny is tied to your name. So I was committed to choosing a name that reflected the purpose of the group and was rooted in scripture. I was led to name the group after the book of Leviticus because that’s the first book where we are introduced to the Levites, those people that God called to maintain the temple. We consider ourselves modern day Levites,” shares Dalton.

The group consists of several singers, all hailing from the Charlotte, North Carolina area. They dropped their debut CD in 2006 which was called Address Change: God’s Great Relocation Music Project. Not only was the project a first for the group, but it branded what they call “Vertical Music”. Steve Dalton says, “Vertical Music is music that is about God, points to God and is sung directly to God.” With the focus clearly on exalting God, the first release set the stage for the ensemble’s goal for ministry.

Now Steve Dalton & The Leviticus Singers of Charlotte is putting the finishing touches on a brand new release, As One: Release The SOUND. This release will be a double CD containing one CD for worship – songs of love and adoration – and one CD for praise – songs of declaration and decrees. Scheduled to drop on July 8, 2016, the new music will surely take praisers and worshippers to another level. The first song to hit the airwaves is the captivating track, “I Win”. The week of its release, “I Win”, soared up the iTunes Christian/Gospel Music Chart and peaked at #59. Penned by Dalton (as is the entire project), “I Win”, and its complementary remix, are deeply personal for the songwriter.

“For the everyday person who has challenges, this song is for them,” shares Steve. “I am encouraging believers to think positively and react positively. If your mind is positive, you are much more likely to have a positive outcome.” The award-winning concept music video, which recounts real-life situations of The Leviticus Singers of Charlotte group members, brings home the point that no matter what happens, in the end, we win. The music video and song have been nominated for a 2015 Prayze Factor People’s Choice Award, four 2015 Rhythm of Gospel Awards, four 2015 Independent Gospel Radio Alliance Awards, a 2015 Independent Artists Christian Music Award, a 2015 Gospel Blockbuster Award, a 2015 Texas Gospel Music Academy Award, a 2015 Chosen Voice Music Award and a 2015 Queen City Music Award. The video most recently won a 2015 Gospel Image Award for Best Video of The Year.

Over the years, the Lord has matured Steve Dalton & The Leviticus Singers of Charlotte into passionate voices of praise and worship. The group’s leader has used the ensemble’s platform to minister from a very personal place. His challenging upbringing gives him a sensitivity to speak to the heart of those hurting in ways that he hurt.

He says, “During the majority of my childhood, my natural father wasn’t present. From when I was born until the age of 17, he wasn't around very much. Thankfully, I did have men in my life like my spiritual father Bishop J. H. Sherman, Sr., my godfather, Mr. George Morris, and other men at my church, but the absence of my natural father left a void that they could not fill,” he recalls. “There were so many conversations that we didn’t have. So many things that we didn’t do together. He passed when I was 17 years old and there was never a chance for us to mend.”

Because of the absence of his father, he struggled with feelings of emptiness. It wasn’t until a “Spiritual Encounter Face to Face Weekend With God” event in 2006 that all of that changed. He says, “One of the rewards of the spiritual encounter was that I was able to forgive my father for everything. The second thing that happened was I gained a burden for the importance of fathers being in their sons’ lives. The third and most important thing was that I allowed God, who has always been with me, the right to be my Father. That experience has also transcended in the natural for me because as a father myself, it’s important that I’m visible and solely involved in my son’s daily maturity.”

With a renewed sense of purpose and ministry, Steve Dalton wants to use music as a vehicle for healing for God’s men and others. Steve Dalton & The Leviticus Singers of Charlotte want to reach every person that needs the touch of God. They are an ensemble with hearts that go deeper than just singing His word with excellence. Most importantly, He has encouraged them to study His word regarding their lives as worshippers. They understand that through the praise and worship experience, people are encouraged and refreshed to live daily on purpose. The group’s leader says about the ensemble, “Experience the singing, the sound and our hearts to worship Him. It’s not a show but a true worship experience”.

Contact Information
"Experience the passionate praise and heart-felt worship. This is not a show but a true Worship Experience."

Connect with us on Social Media: