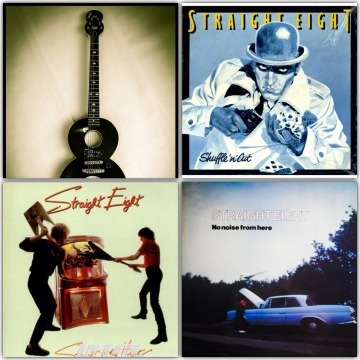 Straight8UK - Our journey continues from 1976 to now …

IN THE YEARS BETWEEN THEN AND NOW...

In 1976 Rick Cassman met Richard ‘Boot’ Kingsman through a ‘wanted lead guitarist’ ad in the Melody Maker. Both lived near Shepherds Bush, West London. Rick rented a basement flat next door to the birthplace of The Who’s Roger Daltry. Rick and Boot formed a rock band called ‘The End’, and they started playing local bars.

Old friend John Burns who had produced Genesis and worked with the Rolling Stones, came down to a rehearsal and was impressed enough to offer the band some recording time.

With the addition of Paul Schofield on bass and Rod Johnson on the drums the new lineup changed their name to Straight Eight, after the local car showroom at the end of Rick’s road.

John Burns took the band into his Escape Studios in Kent where they cut what was to become the nucleus of their first album ‘ No Noise From Here’. He also introduced the boys to Sphere Management.

Sphere was a new and ambitious company set up by Camilla Hellman and Robin Greatrex. Impressed with the band’s hard driving and commercial sound Camilla and Robin signed the band. A residency at London’s famous SpeakEasy club followed. Band changes ensued with Steve Cherry recruited as bass player.

Sphere also had a PR Company and working for them was journalist Peter Makowski. Peter was moonlighting for Pete Townshend’s new label, Eel Pie Records. Rick slipped a tape of the band’s demos recordings to him. The morning after Pete T heard the tape Rick was offered a publishing deal and the opportunity arose for the band to complete the album with producer John Burns at Island's Basing Street Studios and Olympic in Barnes.

The album was released to positive reviews and helped the band build their grass roots following in the UK.

1978 – 1980
Being a part of Pete Townshend’s family was unbelievable and his guidance and support was amazing. The band played extensively throughout the UK, refining their sound and attracting great music press support.

WEA Records signed them after seeing them smash it at The Marquee Club, and Pete T produced and played keyboards on the single ‘Spread It Around’.

1980 – 1981
The band underwent another lineup change with Paul Turner, ex Eddie and the Hot Rods joining on Drums.

The band went into the studio with producer Mike Howlett and recorded their second album ‘Shuffle n’ Cut’. This powerful slice of heavy rock/pop anthems got the band signed to Transatlantic Records in the UK and El Mocambo Records in Canada.

It also helped Sphere Management get the band onto a massive tour of Europe supporting rock legends Queen - a fantastic experience.

The band opened for Queen every night for a month playing stadiums throughout Europe from Berlin, to Rotterdamn to Wembley Arena. And as the opening act for Queen they can claim to being the first band to play at Birmingham’s NEC.

The reviews and reaction were great, and momentum was growing.

In the ensuing months following the Queen tour Straight Eight played support to Robert Palmer, Slade, and Mud whilst continuing to work the UK circuit hard.

Shuffle ‘n’ Cut perfectly captured the band’s powerful cutting ‘live’ sound, and got great reviews in the music press… but failed to achieve a charting single.

UPDATE TO TODAY …Shuffle ‘n Cut is being remastered and remixed by original producer Mike Howlett and shortly the world will hear it afresh.

1981 – 1983
Three more years on the road. Although the band had picked up crossover radio they had not toured in the States or found significant chart success in the UK.

In Canada Straight Eight's sound was attracting both rock and pop audiences, an unusual crossover – and one not lost on RCA USA.
Robert Charles Dunn, who had signed the band in Canada, negotiated a deal with RCA Records in New York.

RCA approached producer Martin Rushent (who had a number one record with The Human League) to work on a new album specifically designed to reach out to mainstream American AOR audiences.

They went into Rushent’s private studio in Berkshire , England and emerged three months later with the album ‘Straight To The Heart’. The album integrated electronic sequenced synth and drums with heavy rock guitars and vocals.

Following internal changes at RCA USA the album never saw a US release, the market it was intended for. Released in the UK, Radio One gave A List rotation to the albums lead single “Desperation” but once again without seeing the band chart.

Despondent and weary, the band called it a day…

Rick went on to forge a successful career as a composer for film and television, Book Kingsman continued to record and tour as did Steve Cherry.

BUT The Straight Eight Journey was not over...

In 2013 at a party in Copenhagen, home of bassist Steve Cherry, a reunion of STRAIGHT EIGHT took place.

It was such fun the boys decided to start working on a new collection of songs and self produce a new record. Their past has made them wiser and stronger. All three original members, Rick, Steve and 'Boot' are now back 'in the saddle' along with new additions Christoph Beck on drums and Vyv Hope - Scott on keyboards.

The new songs have a more focused direction, capturing the excitement and drive of the band with a modern contemporary feel and strong melodic hooks and rhythms.

Nick Brine, producer and engineer of The Darkness, will begin mixing the album at RockField Studios in Spring 2015 - and the band are planning live gigs and a release for Summer 2015.

The entire back catalog is being re – mastered for future worldwide digital release and an official biography with collectors photograph and archive material will be available too. Watch out for their new YouTube channel with rare ‘live’ performance clips and promo video material. The band also have new FaceBook, Twitter and BandCamp web sites with regular updates and clips from the new album.

Management is once again being handled by Camilla G Hellman.

2015 promises to be an exciting year for a band that 'Never Gives Up'.