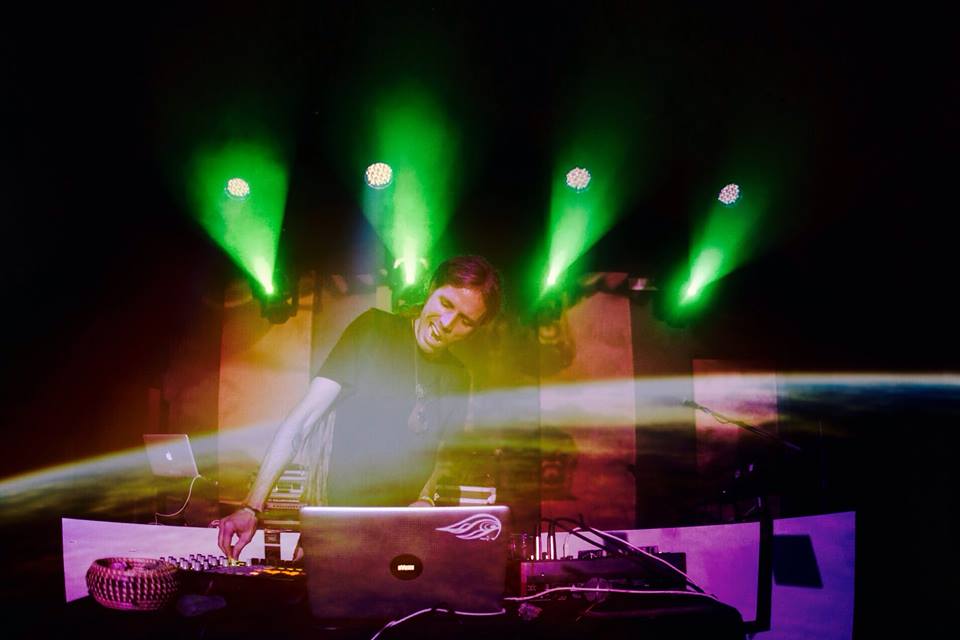 Original mettamusic for the heart and soul. Through highly interactive, extremely unique, original music sets, Stratusphere aims to raise the vibration of the listener through doorways and walls of sound, earthy tones, grounding beats, and deep bass. Striving to share emotion and healing energy through sound, Stratusphere takes the listener on a journey deep beyond this third dimension drawing inspiration from the heart,  spirits , the energy of the night sky, being surrounded by trees and nature, and the infinite mind.

Articel Published by : Beauty in the Beats

Stratusphere gives us a beautiful tune that is part of the new Liquid Bloom [more on the artist collective] remix release, and we’re thrilled he aptly chose the song, “Whispers of our Ancestors.” If you are familiar with Stratusphere, his original music themes toward honoring natural connections and the deep-rooted spiritual ancestry that connects humans with Nature. In some ways, his highly intentional music can be considered auric medicine to enable and guide that age-old deep connection. The original song is now 12 years old, from the first Liquid Bloom album Shaman’s Eye in 2006, featuring Sarah West (vocals) and Robert Mirabal.

Stratusphere, currently out of Colorado, hails from the heart of the Midwest as well as Atlanta, and has played festivals all around the country and beyond — including Tribal Gathering – Panama, Blessed Coast – BC, and Shankra Festival – Switzerland. His latest album, Light Codes, came out June 2018 and you can find it here to give it a listen. Some other festival highlights include Kinnection Campout, Rootwire, 3DL, Earthdance, Unify, Shamanic Boom, Zen Awakening, and more.

After his “When Space Speaks” 2017 tour that included a dozen and a half performances around the country, his 2018 summer album release led to him opening for Desert Dwellers as well as releasing music on their label, Desert Trax. He has shared stages with the likes of Kalya Scintilla, Bluetech, Random Rab, bioLuMigen, Kaminanda, Living Light, and Somatoast. He’s also been part of several compilation albums with original submissions, including on Aquatic Collective’s “Standing with the Waters” benefit album, Porangui remix with the song Illuminar, Gang Related Activities (April 2018), and an Antandra remix from 2016 with “Dazed and Amused.”

Stratusphere recently played at the coveted Alex and Alison Grey’s Chapel of Sacred Mirrors this Fall, and is playing 12/22 at the Black Box in Denver with Telefon Tel Aviv.

A rooted and beautiful connection comes through in all of his music, and we can feel a lot of thought and intention behind each song he creates. A few of our favorite songs of his are The Mother Connection, Grandfather, and the inspired Welcome the Morning. We hope you will be able to catch a sundown or sunrise set of his some day soon, as he will be traveling again to play his music around the country in 2019. Looking forward to staying connected to his journey!

We are exciting to be a part of a project more than a decade in the making. Back in 2006, Liquid Bloom recorded the song “Whispers of Our Ancestors” as part of its debut album, Shaman's Eye. Now 12 years on, the track is being revisited by a number of talented members of the Desert Trax family.

Among the artists taking on the cut are UNTZ faves Moon Frog and Drumspyder, but today we feature longtime favorite, Stratusphere. We have been watching Jacob Paskus for a number of years, and followed him from the southast to his current location in Colorado.

Paskus has always been a master of rich, sonically vibrant tapestries. His new remix is no exception. His ability to control each and every frequency range with such charisma and energy all the while not banging you over the head with bass or clattering drums is fascinating. This is definitely a standout track among a brilliant set of remixes, and any time we see the Stratusphere name, we know he's going to deliver.

Whispers of Our Ancestors is out December 14.

Stratusphere to play at Shankra Festival in Switzerland

We had the amazing possibility to get in contact with messages from all over the world: more than 450 artists decided to share their passion and work with us, participating to the Music Applications.

Thank you! Our mission would not be carried out without you.