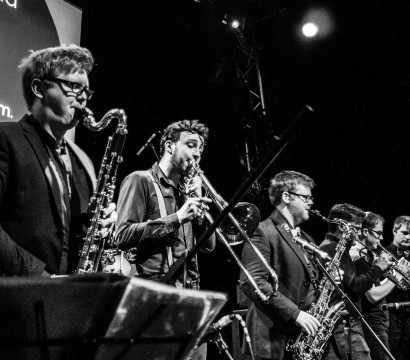 TBL8 (pronounced "Table 8") are an eclectically-inspired urban brass ensemble based in Dublin. Established in June 2017, TBL8 combines nearly 100 years’ worth of playing experience among its members who come from varied musical backgrounds. They pride themselves in performing a repertoire which can only be considered a blend everything from disco, to pop, to ska and everything that fits in between those lines - all arranged/composed to suit their unique brass sound.

TBL8 debuted in the Summer of 2017, playing as a stripped back version of the current lineup as a stage band for a centenary birthday celebration. That December, they would make their professional debut as part of Garageland Ireland’s final 2017 concert at Dublin’s Button Factory venue, followed by a more intimate second gig at Dublin’s Sin É venue. They are currently working towards exciting projects on the horizon in 2018, so stay tuned!

TBL8 announced for Battle for the Bay 2018 lineup

TBL8 can officially reveal that they will be a part of this year's Battle for the Bay!

The 3-day festival, now in its 12th year, is the biggest water sports event of its kind in Ireland. Taking place at Dollymount Strand, the festival has become a kickstarter for the Summer festival season, drawing in over 65,000 people last year.

TBL8 will be a part of the weekend's musical entertainment, playing the King Kong stage at 4pm on Saturday 26th of May. The event is free to attend, so make come along and see what all the fuss is about!

TBL8 are proud to announce that we are in the production process of creating our first EP!

While still early on in the pipeline, we can confirm that release daye in July is being targeted. The EP will feature an original tracklist composed for TBL8.

We can't wait for you to hear what we've got waiting in the background!

After a month's radio silence, TBL8 are entering 2018 with some high prospects on the horizon!

To lead into the start of our rehearsals ahead of our schedule release, we have released a live recording of our most popular tune from the Button Factory - Feel Good Inc. by Gorillaz! Listen through our music tab now.

TBL8 are excited to hear of we have been featured on Hot Press Magazine's website alongside other bands featured at Garageland Ireland's Button Factory gig.

"Thanks Hot Press Magazine for once again getting right in behind Garageland on our super end of series night in The Button Factory with TBL8, Dead Van Drivers, The Felonies. The venue was jammed, with over 400 in attendance, and of course it's no secret anymore that U2 were at the show, checking out some future competition. With support also from IMRO Ireland, Arts Council Ireland, RTE 2XM, Sound Training, RAAP - Recorded Artists Actors Performers, Sun Studios, - http://www.hotpress.com/photos/photo_st.php?id=21552151".

Following a busy week of gigs and recording sessions, TBL8 are calling it a wrap for 2017!

We would like to extend a huge thanks to Garageland Ireland and Sin É for having us over the week for our debut gigs in Dublin. To top off the end of the year, we would like to express our thanks by releasing a professional recording of the opening track from our set.

With thanks to Sound Training Productions, please enjoy the best of Henry Mancini, available through our SoundCloud  and through our music tab now.

Bono & U2 present for TBL8 at the Button Factory

As first reported by Buzz.ie, and later confirmed by Garageland, Bono and U2 were present for the Garageland concert at the Button Factory last night.

Bono, who is father to the frontman of Inhaler, was given access to the upstairs area of the Button Factory, which was questionably cordoned off on the night of the gig. TBL8, who were penciled in for the opening slot on the night, were unaware of the band's presence at the venue.

TBL8 are pleased to welcome trumpet player Brian Richards to their current lineup, officially justifying the '8' in 'TBL8'.

Richards joins the existing septet on the heels of their professional debut at the Button Factory this Wednesday. On joining the group, founder Aaron Poole said "I've known Brian for years and had been eyeing him up as a potential member for a while. He has as much experience in playing trumpet as I do playing sax, and he's nearly 4 years younger than me! He's got a great sense of charisma and no confidence issues - he'll be a great asset to our team".

Following a successful studio session and interview with Garageland Ireland, TBL8 are pleased to announce that they have entered into an amicable partnership with Sound Training Productions, Dublin. The institute, which focuses on training the future of sound technicians and track mastering, will host TBL8 as their recording partner for their upcoming brass-focused seminars.

Aaron Poole, founder of the group, stated "TBL8 are advocates for education - most of us are in college and I spent the last four years studying music myself. This will provide the students a great opportunity to engage with live samples of brass music to add another facet to their training. We hope we can do all we can and we look forward to working with Peter and the rest of the guys in the future".

We're delighted to announce that we will be playing a 2-night stint in central Dublin for our professional debut! We will be first playing in The Button Factory, Wednesday December 13th, as part of Garageland Ireland's final gig of 2017! The following night, in Ormond Quay's Sin É venue, we'll be playing a more intimate set as part of the Crystal Skull sessions. We can't wait to get out and show the world what we've been cooking up! Get tickets for our Button Factory gig at garageland.ie/TBL8!

As first revealed by Garageland Ireland, The Garage Gigs Autumn line-up which will feature more than 60 artists across 7 venues in Dublin, Cork, Limerick, Kilkenny, and London making it the biggest season yet of the the now legendary shows. The final of these will take place in the Button Factory this December, and will feature TBL8 Brass as part of their line up for that show. TBL8 will be joined on-stage by a varied trio of performing ensembles - The Felonies, Dead Van Drivers & Inhaler, the latter of them launching their EP and serving as a headliner on the night.

TBL8 first performed as a trimmed down version of its current lineup, performing in Ashebourne Co. Meath as a quintet. We look forward to debuting in a professional capacity this December alongside these talented groups.

Contact Information
TBL8 are a 7 Piece brass band available for all events that call for some groove - get in touch with us if we suit your taste!
Information Request