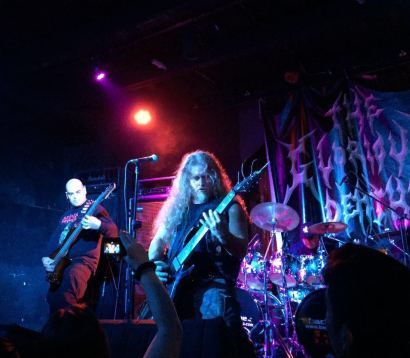 The Glorious Death is and Old School Death Metal band formed in 2005 by Carlos Linares (drums) and John Mejia (Guitar and Vocals) , native of Medellín , now accompanied by Andres Serrano on bass ,also native of Medellin. The band is based , active since then in Boynton Beach to South Florida , USA .

Carlos drummer was a member of bands like Neurasthenia, Autistics (Colombia) and Officer Down, At Odds With God (Florida), guitarist and vocalist John participated in the bands Millennium, Averno (Colombia), Blood Oath (Florida) among others He is currently Lucera’s vocalist (Cali Col USA) , Andres Bass player settle bands like Slander (Colombia), In The Eyes Of (Florida).

The theme of the band revolves around the absurd social conflicts, reflections on the life cycle of life and death in which inevitably lies submerged humanity, hence the name of the group derives precisely.

The band was invited to participate in an exclusive show at the Festival of Colombian Metal 'Del Putas Fest' in the city of Medellín in 2013, as the festival Xtreme Death Fest in the same city during the same year. Thus it has been opening band recognized groups of gender as Whiplash, Exhumed, Solstice, Hellwitch, Terrorizer, among others, and most recently the Colombian band Masacre, who played for the first time in Florida. USA.
The band has presence in different media platforms and streamming as facebook, YouTube, Reverbnation, Myspsce, Lastfm, etc.
Discography
• The End - Demo EP 2007
• The Glorious Death • Album 2013 full-length CD
• Participation in tribute to Masacre 'Masacrando El Imperio del Terror' CD 2012
Videography
• Scars of War. I videoclip occurred in Florida in 2013; promotional track of the self titled album The Glorious Death.

• Blood in my Hands. Video recorded live in December 2014 during a recent presentation of the band in Churchills Pub, one of the most renowned concert in Miami sites. This track is from the upcoming album promo.
The Glorious Death is preparing the production of next-length, which will be released this year.
The band recorded a demo-cd in 2007 entitled The End which has been to promote and distribute of the band.