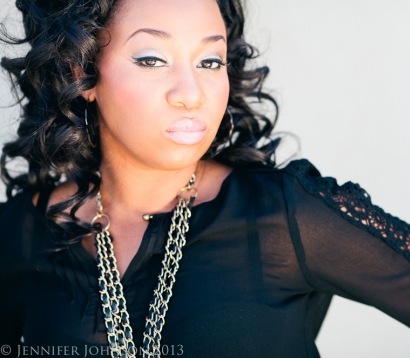 Singer and Actress Tasha Scott is ready to return to fame, with the official launch of her music career. Born and raised in Louisville, KY – Tasha Scott knew at the tender age of eight, that she wanted to sing after winning a talent show. She began performing in more local talent shows and other events to craft her singing and performing skills. Tasha’s mother was a single parent who worked two jobs with five kids, Tasha is the only girl. While her brothers became heavily involved in sports, she knew it would only be a matter of time before she got her big break in entertainment. At the age of ten, the family moved from Louisville, to Hollywood, CA. “I had performed all over Louisville meeting a lot of big and famous people and winning a lot of talent shows, there was nowhere else to go but to a major city such as Hollywood to fulfill my dreams,” Tasha shares.

Now being in the city of dreams, Tasha caught the acting bug and began auditioning for television roles. The first one she landed allowed her to do what she loves best, sing. She appeared on two episodes of the NBC sitcom “Amen” which starred the late Sherman Hemsley, where she was a choir member. Tasha followed that by performing on Star Search and with guest spots on television shows ”227” and “Throb,” which starred a young Paul Walker of “Fast and Furious” fame. After appearing on television it was only a matter of time before the young star got her first movie role. That role would be in the 1989 blockbuster film “Troop Beverly Hills” starring Shelly Long. That was followed up with a TV movie entitled “Kiss Shot,” in which Tasha’s character played the daughter of Oscar winning actress & comedian Whoopi Goldberg. More television roles would follow; including appearances on “Full House,” “Quantum Leap” and “Under One Roof,” a sitcom starring James Earl Jones and Vanessa Bell Calloway. However it would be her role in the 1994 Fox TV sitcom “South Central” that would make her a household name. Tasha played the sassy little sister of Andre, played by actor Larenz Tate. The sitcom also included early acting roles by Maia Campbell, Star Jackson, the late Lamont Bentley and a young and fresh Jennifer Lopez. The series was canceled after one season. That same year, Tasha shot a memorable commercial for the Coca-Cola brand.

In 1996 Tasha had a recurring role on the WB’s “The Parent’ Hood” starring Robert Townsend and Reagan Gomez-Preston. Later that year and the following year Tasha played her biggest role yet, touring the US in the classic “The Wiz” as Dorothy. The stage play also included Grace Jones, Peabo Bryson, CeCe Peniston and Tony Terry. Tasha received rave reviews by reviewers and critics. “That was actually my first big stage play. I had never really done theater. I was just like wow this is different from sitcoms, where we can call cut. With stage, you have to keep going,” Tasha shares of that experience. “I loved traveling from city to city and all of the interviews and press. Knowing I did something that Diana Ross and Stephanie Mills did; and they loved me in this.”

While Tasha had conquered TV, Film and now stage; music still was her main goal. She signed a deal with Michael Jackson’s now defunct label MJJ, an imprint of Sony Music. The only release from the label that included Tasha was the Men of Vizion single “Joyride” released in May of 1996. Although an album was never released, over the years Tasha released various songs online to keep her fans happy. “Music has been very important to me, it’s gotten me through a lot of things. Whether it's R&B, Pop, Rock, Country, Gospel or Jazz; music has been the best blueprint of my life,” states Tasha. A voice like Tasha’s doesn’t come along too often in a lifetime.

In 2011 Tasha made her official return to music with the incredible ballad “Gone,” from the soundtrack of the VH1 hit reality show “Brandy & Ray J: A Family Business.” Although the song was never released as a single, the buzz from it helped bring Tasha’s name and voice back into the limelight.

2018 will indeed be a very special year for Tasha, as she prepares for her long awaited debut EP. The EP is scheduled for release on August 27 on all digital platforms via Zania Music Group (ZMG). The first offering is the mid-tempo, sexy and sultry "Here We Go". With this song I wanted to express my grown and sexy side to my fans. And show that love can still be very classy and sexy all at the same time, while having fun with the one you love,” Tasha says of the single she co-wrote with Eben Frankewitz. Tasha’s list of musical influences include Michael Jackson, Whitney Houston, SWV, Charlie Wilson, Anita Baker, Luther Vandross, Mariah Carey, Mary J. Blige, Celine Dion, Adele, Chris Brown, Beyoncé, Joe, Ne-Yo, LL Cool J, Tupac, Busta Rhymes, Aaliyah, Fantasia, Jennifer Hudson and the list goes on.

Tasha says of her upcoming EP, “I would describe my sound as very Urban Pop; with a lot of soul, with a twist of Hip Hop. My music is straight forward and to the point.” With this being her first EP release Tasha has many goals for this project, “One goal is to have my music heard all over the world and to have a #1 single on the radio [and EP] that people can relate to and love -- I want to tour and headline my own show. I would love to work with a lot of other great producers and writers for this album as well.”

Music may be Tasha’s priority right now, but acting isn’t necessary on the back burner, “I would love to play in an action packed movie as well as have my own television show that could run for at least ten years or more,” states Tasha. Another goal for Tasha has been to work with Tyler Perry and to star in a touring stage play about her life, focusing on how she got started in the business.

“My career ride has been very fun and a great experience for me,” Tasha declares. “I just want to become the star I was destined to be. Being famous has always been my all time dream. I want the world to love me…just for me!"