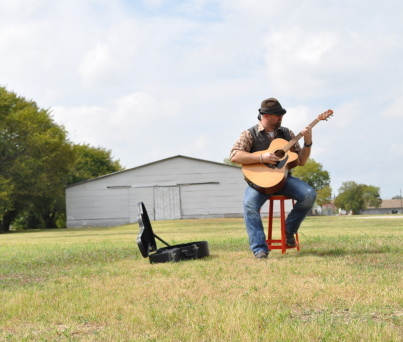 Native Texan, loop artist singer/songwriter, comedian and multi-instrumentalist, Thawind Mills has been writing and performing his own style of musical entertainment in and around his home state all his life. His choice of material encompasses an incredibly eclectic range of musical styles from rock to reggae, blues, metal, and funk, to 50's doo wop. His passion to explore different genres, and his way to tease out savory melodies brings to mind other talented artists that he loves, like: Bob Marley, Joe Satriani, Bootsy Collins, Keith Whitley, Ry Cooder and Ritchie Valens. As a songwriter, listeners are sure to hear the familiar influences of Lennon, Dylan, Cobain, and although he captures a sound that is very much his own his early years of listening to great songwriters is where he got his start.

"Prolific" is an adjective that easily describes Thawind; he has 7 albums to his credit, including an original song catalog in the hundreds and collaborations galore. His music is somehow familiar and can leave the listener wrapped in a sonic sound blanket of memory and emotion. Regardless of how his music grabs you, a performance by him might be the most genuine thing you've heard in a very long time. Described as authentic to the core with his clever marriage of well-crafted songs, harmonious lyrical expression and exciting guitar playing he creates a beautiful song listening experience both studio and stage.

Thawind focuses one hundred percent of his time on creating music, touring, and being inspired by his audience. His current full length studio album "Delirious Love Symphony" is an emotional walk thru the progression of love covering the highs and depressions of it and how its transforms people. Between the studio and the road he has found himself in some great venues with fantastic people and perfect opportunities to learn and hone his song-craft where he has shown that his home is the stage, and his satisfaction is an entertained audience.

Thawind Mills was recently on Randy Treadway's In the Musc Room. See pictures and listen to the interview HERE:

Write up The Third Coast: places and personalities - Houston by Richard Tew

"Hailing form north Texas, he-early-on, took an interest in music but that interest quickly took a backseat to life. He would later rediscover it and let it lead him to eventually quitting his day job, selling his house, recording studio, and with his car and small trailer trailer he built himself around April of this year. He then headed out on the open road to pursue his passions. “I sold just about everything I had. I found music, became my therapy. It's a source of great love,” he said. “I'm a high school drop out, but that doesn't determine who I am. I went back to school and got a scholarship in writing,” he says. “My goal is to break a thousand songs before I die.” He said he has about 300-400 songs now. I addition to signing, he plays guitar, drums and mandolin. He's a self-taught musician. He describes his music (he writes his own) as Americana-styled-rock and roll. Most of his time is spent traveling around the state performing at gigs and going to the recording studio to work on new material. His advice to those who might want to follow their dreams the way he did: “Jump of the cliff; do it!” He says the biggest problem is procrastination, “The problem is, first you are in your 20's and you think, I'll get established and then I will do this; then you are in your 30's and now you know, I have a house and all this other stuff, and now you are in your 40's and think I will wait a little bit longer and now you are in your 50's...My grandfather always said it best: 'You see that pretty girl over there, go over their and ask them because if you don't someone else will.”

"Really enjoyed hearing these tunes my friend..love that melody and your strong, soulful vocal for "narrowcast"..great to hear such a rich, articulate lyric like that. You got a wicked, catchy setlist here!"

"Great stories in your songs!! Exceptional execution of music and vocals!"

Thawind Mills brings energy to the table, and will put a smile on your face!

Thawind Mills is a force to be reckoned with. His sweet tenor voice combined with poignant lyrics and haunting melodies on songs such as "Love Cancer" and "Amazing" make you wish he was singing these sweet love songs to you. He shows his versatility and guitar prowess on "Killer" and "Take Me" which showcases his ability for straight up rock and roll with a metal edge. Personally I can't wait for his next live performance.

Brother Thawind Mills...your music is pretty dog gone good stuff and your video work is through the roof! Rock on brother and keep on kickin' it!

Great song swap with friends benefiting a worthy cause.

Kicking off the 2014 concert series with an evening of the sweetest love songs you've ever heard!

A complete evening with the solo acoustic songster Thawind Mills.

Inside The Book Carriage is an evening with entertainment by Thawind Mills.

This is a all day charity event benefitting American Cancer Society’s Relay for Life Noon – Midnight. It is an all day deal since cancer doesn’t sleep we don’t either. I play 8-9 pm

Open Mic at EMBARGO - Hosted by Wes Word. Playing before the openmic starts.

I will be the Featured artist