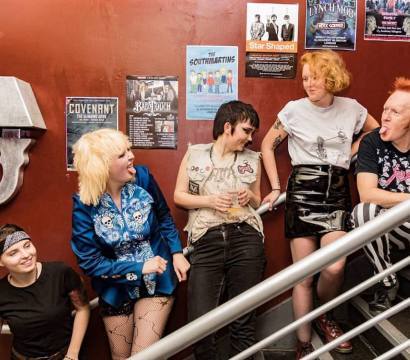 The Featherz (formerly The Feathers) are a Welsh/English/Swedish/Italian band with glam and punk influences (self-styled as "Flock Rock") led by Danie Cox (born 15 December 1990 in Bridgend) on lead vocals and guitar. Cox formed the band with two fellow former members of Georgie Girl And Her Poussez Posse, a band fronted by Georgina Baillie and mentored by Adam Ant. After leaving Baillie and Ant to form their own group, they received press coverage in the Ipswich Star, Wales On Sunday, Basingstoke Gazette, website Louder Than War and rock magazine Vive Le Rock who included their track RNR★ on the free CD with the January/February 2014 edition (issue 16). They also completed a UK national tour supporting Boy George, in three of whose videos Cox has appeared and have since toured with The Damned.

Update Required To play the media you will need to either update your browser to a recent version or update your Flash plugin.
Download
Back
You Tube
Back