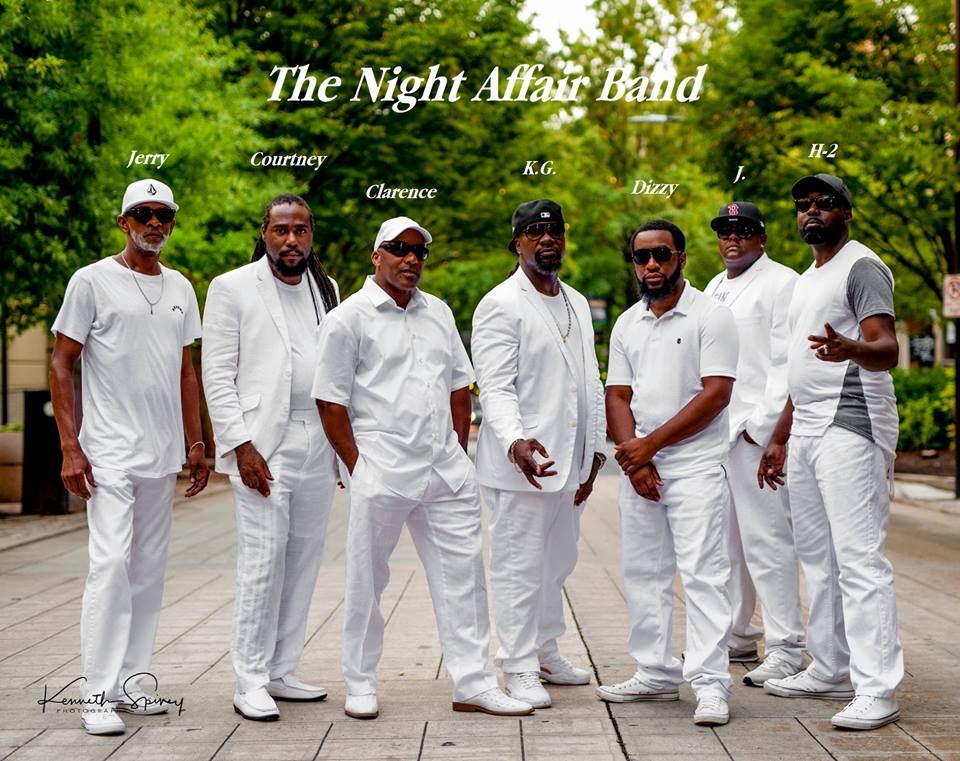 The Night Affair Band, a South Carolina based band that has through the years gained recognition for their intense musical energy, versatile vocals, sensational style and dynamic sound. The Night Affair Band experience is a show like no other. They allow the audience and fans to become absorbed by their high energy and style. The Night Affair Band was nominated for the 2018 ZBT Awards: Best Cover Band. 2018 also saw the release of their first original recording debut single “Take You Home”. The band is currently in the studio completing their debut album.

The Night Affair Band is a seven piece outfit with (2) board players, lead guitarist, bass guitar, drums and outstanding vocals. These musicians have been brought together to do one thing and that is to entertain and wow their audiences.

J started singing at age of 4 with his family’s gospel quartet group. He shared the gospel stage with legends like Lil Cedric and The Hailey Singers, The Gospel Keynotes, The Fantastic Violinaires to name a few. In his teens, he found his love for Soul music listening to the likes of Johnnie Taylor and Marvin Sease. J realizing in his adult life, that Southern Soul music is his heart and soul. He has most recently shared the stage with greats such as, Theodis Ealey, The late Marvin Sease and Mel Waiters, along with others such as Frankie Beverly and Maze just to name some of his most memorable shows. J graces the stage with full energy and a stage presence like no other. His love and dedication to his craft and his beautiful daughter, is what motivates and keeps him focused. With his sensational, soulful, vocals J has all the potential to be one of the best Southern Soul Artist of his time.

KG has been singing since the age of 6 and still doing what he loves rather if it's gospel or R&B. He's been blessed to sing with various professional gospel groups and live bands, with his soulful voice and smooth baritone singing the skies the limit for this brother. Inspired by artist such as KC Hailey of Jodeci, Calvin Richardson and D'Angelo just to name a few, he's not a note shy of being a solid background and lead vocalist you would love to see and hear so stay tuned.

Halston is a Greenville SC native. Born into a very musical family and since Halston was a kid he has always been attracted to the low end. He started playing the bass in college, at South Carolina State University, while playing the tuba on the Marching 101. He has been playing with the Night Affair Band since 2011. The Night Affair Band is Halston’s first and only band that he has played with professionally, besides from filling in for bass players on shows or other events. His main objective as a bass player is “to make sure the people and the band can feel the emotion of the music as they listen or dance. You might not notice the bass player every time, but as long as I can see you can feel me, that's good enough for me.”

Clarence is no stranger to the world of music and entertainment. He has several years of experience with captivating audiences in band settings. His vocal and instrumental performances include private functions, weddings, festivals, and more. He also enjoys traditional and contemporary music and much of the latest sounds. Clarence is a leader who also accepts learning from others to expand his musicianship. He currently brings all his attributes to The Night Affair Band where he also shares his skills as the sound technician. His musical talents also include playing guitar and drums.

Greenville, SC native, Jerry Singleton, is a self- taught musician with 40 plus years of experience. His musical influences include Earth, Wind and Fire and the Average White Band to name a few. Jerry has had the pleasure of sharing the stage with such greats as The Ohio Players, Frankie Beverly and Maze, Harold Melvin and the Blue Notes among others. When asked why he plays, his reply, “music is my passion… my high”.

Courtney was born and raised in Graycourt SC where he currently still resides. The 32 years old has been playing music since the age of ten and like many in the Southern Soul genre Courtney starting off in the church. He says” music has taken me farther than anything I have ever done”. Courtney plays both the piano and Hammond Organ. I love music more than anything in this world I really enjoy what I do I love all different types of music.

Dizzy is native Florence, SC and the youngest member of the band. This life of the party started traveling and playing music at the age of 3 years old! Dizzy has honed his craft while working with many different bands and artist during his 28 years of life. There is never a dull moment when Dizzy is around.

The Night Affair Band has been added to the Red Arrow Concert Series 2019, hosted by Red Arrow Studios located at 2345 Sandifer Blvd Ste B Westminster, SC 29693

The Night Affair Band has received the honor of being nominated for the Best Cover Band by fans. Voting on nominations begin October 31st with winners to be announced on December 16th in Houston, TX.

TNAB releases the offical video to their debut single 'Take You Home".

The long awaited debut single by The Night Affair band hits the airwaves. 'Take You Home is available on CDBaby, Amazon, Spotify, iTunes and wherever music is sold.

*Please note, in addition to ticket purchases there is a $10.00 minimum purchase of food or drinks required per person. Ticket price does not include gratuity.