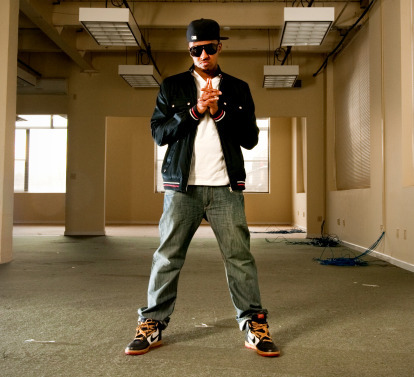 Prestige (Kyle Eatmon) was born and raised in New Britain, Connecticut, a city that earned a reputation for hard work during the early part of the 20th century when it was considered a manufacturing center. It’s that same hardworking spirit that inhabits him and drives him to want to be the best in everything he does; exhibited by the high quality level of music he creates. Growing up through the 80's and 90's he was able to see the birth of hip hop music and the evolutionary stages it’s gone through to date. Drawn to the knock of the heavy drums, the chopped and looped soul samples, the rhyme schemes and lyrics, and just the resourcefulness of the music he was engulfed in the genre. They were able to make something out of nothing. And it is with that mind state he approaches his own music. Tracking since 2001, Prestige, gained the experience and skill to be able to evoke different emotions through his music, which allows him to be creative and branch out to other genres and styles of music. Never detaching from his roots, he still keeps that hip hop feel in all his tracks. Clever keyboard work, crisp percussion and swagger make up the basis for most Prestige tracks. "It’s just all about a feel at the end of the day." Prestige says in reference to creating," If you can capture the feeling you’re after and it translates, you know you’re on to something". As a result of collaborating with various artists as a producer, he began to realize his own voice lyrically. Through these experiences, the development of his skill has forged forward in to a style he can call his own. With a vast span of subject matter streaming from the pages of his own life, Prestige is here for you to read and interpret.

Eager to break the stigma of being just a producer, Prestige released his first mixtape entitled 'The Draw' in the  2010. A project where he rhymed over some of his favorite songs. Inspired by artists like Jay-Z, Royce da 5'9" and Kanye West, Prestige derived the title 'The Draw' to pay homage to the original records he chose for the mixtape. The lyrical content that makes up a good portion of the project is very personal, which allows the listener to understand who Prestige is as a person, while his flow and delivery shows what he brings to the table as an artist. Prestige came to prominence following the release of 'The Draw', creating a solid foundation to his fan base.

Achieving such success allowed Prestige to move forward and continue to create 'Gotta Start Somewhere' which was released in December 2010. The project has proven to deliver satisfaction and enjoyment to a wide range of listeners from avid lyric seekers to those just looking to chill and vibe out. Staying true to his producing roots, Prestige produced the deep, introspective records on the mix tape. The lyrics throughout the project not only capture interest, but sustain it from "Courtesy Call" to "Goodbye". 'Gotta Start Somewhere'  displays Prestige's versatility, range, artistry and the potential to take it as far as he wants to take it.

WITH PERFORMANCES BY
D.MOORE &
PRESTIGE

Performers include:  Willis and Aja Edwards