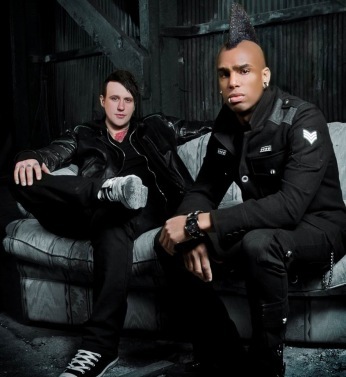 The Veer Union was formed in 2004 by vocalist Crispin Earl and guitarist Eric Schraeder. Originally from Port Alberni on Vancouver Island, the two longtime friends and neighbors had a common bond. “We had played in bands together and we were both living out of our rehearsal studios in downtown East Vancouver,” recalls Crispin.

Living for their music was to become the thing that held the UNION together. Crispin, who was the vocalist for the popular local band called Everything After, was gaining national attention as a songwriter with credits on Motley Crue drummer Tommy Lee’s solo CD Tommyland: The Ride. Eric, who has recently relocated back to Vancouver after a stint in Los Angeles playing with the band 40 Foot Echo (Hollywood Records), was working on projects of his own. The two wrote music together for months and found their styles extremely compatible.

The Veer Union made their mark in 2009 with the top 10 hit single “Seasons” off their debut album Against The Grain, which peaked at #7 and was the longest charting rock song for a new artist all year. It became the theme song for the 2009 Stanley Cup winners, the Pittsburgh Penguins. “Seasons” was also featured in all Major League Baseball postseason telecast as well as NFL, NASCAR, ESPN, WWE, NHL and more. Their second release “Youth of Yesterday” was the highest added song to rock radio first week of its release. They have played shows and festivals with acts such as Hinder, Breaking Benjamin, Framing Hanley, 30 Seconds to Mars, Flyleaf, Staind, Seether and Theory of a Deadman.

They released their highly anticipated sophomore LP Divide the Blackened Sky on March 27, 2012 after signing their recent deal (Rocket Science/Adaptation/SONY/RED).The majority of the album was self-produced, written and recorded by the band. In addition, production on the first single “Bitter End” was handled by world renowned producer Brian Howes (Nickelback, Hinder, Skillet, Puddle Of Mudd, Rev Theory) and was mixed by Jay Van Poederooyen. “The first single Bitter End describes the band overcoming the struggles of the past, and persevering into a brighter future.

PRESS - Featured in the largest rock magazines in the world

WEB - Features on the front pages of many major websites

DIGITAL  - Coverage on the most heavily trafficked digital platforms

TOUR - TVU has played for millions of fans around the world

About The Veer Union

The Veer Union made its mark in 2009 with the top 10 hit single, “Seasons,” off the debut album, Against The Grain, which peaked at #7 and was the longest charting rock song for a new artist all year. It became the theme song for the 2009 Stanley Cup winners, the Pittsburgh Penguins, and was also featured in all Major League Baseball postseason telecasts, as well as the NFL, NASCAR, ESPN, WWE, NHL and more. The second single, “Youth of Yesterday,” was the highest added song to rock radio the ?rst week of its release.

The Veer Union has toured the US for over a year in support of Against The Grain,

hitting major cities across the nation. The band has played shows and festivals with the likes of Staind, Hinder, Theory of A Deadman, Korn, Breaking Benjamin, Framing Hanley, 30 Seconds to Mars, Flyleaf and many more.

VANCOUVER, BC – Vancouver alternative rock outfit, The Veer Union, is proud to announce that its sophomore album, Divide The Blackened Sky, will hit stores on March 27th, courtesy of Rocket Science Ventures. The band will unleash the 10-track full-length just days before embarking on a US tour with My Darkest Days – The Veer Union’s first trek south of the border since 2010.
“Our new record, Divide The Blackened Sky, is a much darker and heavier effort than our previous works,” said vocalist, Crispin Earl. “It depicts all the hard times we have been through over the last couple of years.”
In addition to the newly revealed release date, The Veer Union has also unveiled the cover art and track list for the forthcoming album – an adrenaline-pumping collection of modern rock anthems that will stand as the long-awaited follow-up to the 2009 debut, Against The Grain.
The track list for Divide The Blackened Sky is…
1. Borderline
2. Bitter End
3. I Will Remain
4. Buried In The Ground
5. Inside Our Scars
6. Live Another Day
7. Divide The Blackened Sky
8. Silent Gun
9. Last Days Of Life
10. Stolen
Divide The Blackened Sky was recorded at VanHowes Studios, Greenhouse Studios and Renegade Studios in Vancouver, BC. The majority of the album was self-produced and recorded by the band. In addition, production on the first single, “Bitter End,” was handled by world-renowned producer, Brian Howes (Nickelback, Hinder, Skillet, Puddle Of Mudd, Rev Theory), and was mixed by Jay Van Poederooyen.
Cover art comes courtesy of Jeff Ojeda at Harmonic Concepts.
A lyric video for the new single, “Bitter End,” can be streamed on YouTube at: http://youtu.be/7efeVHf2gNo.
Added Earl, “The first single, ‘Bitter End,’ describes Eric [Schraeder, guitar/vocals] and I finding the inner strength to persevere through seemingly impossible times to once again do what we love most, which is creating music.”
“Bitter End” will hit the iTunes Store for digital download on February 14th.
Stay tuned to the official The Veer Union Facebook page: http://www.facebook.com/theveerunion and Rocket Science Ventures website: http:// www.rocketscienceventures.com for more information.