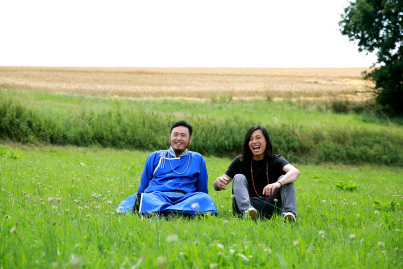 TULEGUR is a modern nomad music duo, rooted in traditional tunes of Inner Mongolia (Mongolian part of China) and influenced by contemporary music. Their sound is a great mixture of traditional Mongolian music, acoustic rock, throat-singing (also known as "Khoomei") and electronic music. This combination results in a unique style which some described as “ethnic post-rock” or “psychedelic nomadic rock”.

Vocalist and acoustic guitar player Gangzi is the soul of Tulegur, educated in classical music and opera, and his voice is trained for a broad range of throat singing. Attracted by modern music, Gangzi moved from Inner Mongolia to Beijing to perform and compose. A year later, he returned to his hometown, Hulun Buir, where he spent time with local nomads to learn Khoomei and their cultural traditions. This nomadian experience became a revelation in his life and helped him to find his own music style. After years of solo performances, Gangzi has achieved remarkable success all around China and worldwide.

Towards the end of 2014, percussionist / electric guitarist Zongcan joint Tulegur’s new bigger picture to help extend the music to a wider range in expression. As a multiple instrumentalist and sophisticated artist, Zongcan has traveled to many places within and beyond China and gained has his special ways to embrace different cultures to be fused into with his world of music.