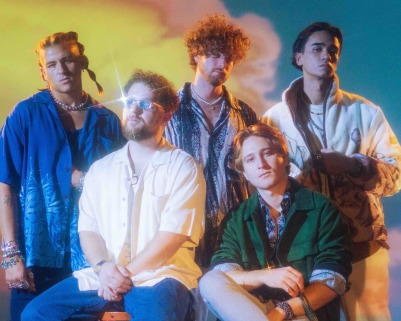 2019   RECIPIENTS OF THE YOUNG ENTERTAINER'S AWARD

Undecided Future is an Urban Pop band, with funky beats, and a soulful sound. The 5 guys collectively write and produce their own ‘saucy’ songs and produce all their own videos, usually with a twist of humor. They’ve been playing shows all over the country making a name for themselves while giving their fans an energetic and entertaining live show. You could find the band on the main stage at Downtown Disney, Anaheim for the past 4 years. Undecided Future has organically grown not only in popularity but in their own sound and voice over their 10 years together.

The band was featured in Dec 2021 issue of OC Magazine, print and online. Also, the band had their first song Synced in a teen movie called ‘The Never List’, released on streaming in April 2021.

Undecided Future are winners of the 2019 “Young Entertainer’s Award”, 2018 winners at the Segerstrom Center for the Arts Countrywide Talent Competition. And the 2017 winners of “Best.Cover.Ever.” a Ryan Seacrest global YouTube competition. Their final video performing with Jason Derulo has over 7.5 million views to-date. While filming, Derulo named Matt “The Sauce King” for his amazing vocals.

Undecided Future was formed in 2012 at Orange County School of the Arts, Santa Ana, CA They met while they were in Freshman year of High School.

Since 2012, UNDECIDED FUTURE have written produced and made DIY videos for 2 EP's - "DISCO BALLS & MATING CALLS", "JUGO" also for Singles "HMU" and "Intoxicated". They are a performance band that has entertained people of all ages at numerous venues from LA to NY to Vegas. The venues include Downtown Disney, Disney CA Adventure, Disneyland, KAABOO Festival, Coach House, House of Blues, County Fairs, Sawdust Festival, Whiskey A Go-Go, W Hotel Hollywood, Viper Room, the Sayer's Club and summer of 2022 they'll be sailing aboard the Scarlett Lady entertaining passengers on three Virgin Voyage cuises.

3. 16 original songs on Spotify and all streaming platforms, and more to come.

5. Undecided Future was select by Jason Derulo as the winners of the Ryan Seacrest Youtube series "Best.Cover.Ever." Currently the video almost 8 million views.

6. YouTube and ReverbNation featured Undecided Future on thier Home Pages, creating fans in Germany, United Kingdom, France, New Zealand, Amsterdam, Mexico, Sweden, Italy, Australia, Canada, Japan and all across the United States, with Curation of all 16 songs on ReverbNation.

MATT ISAAC, LEAD VOCALS - Matt was brought up in a musical household. From a toddler Matt sang from the moment he woke up until he fell asleep. He had a trumpet that he frequently played along with his toy piano for his family and neighbors. Matt’s natural voice swooned all that heard him and his humorous and playful personality filled any room. Matt's passion for music and his command of his audiences is perfect for a front man. He studied the Film & Television Conservatory at Orange County School of the Arts where he made film and TV at school and put together the Undecided Future band in 2011 with some classmates. He enjoys good comedy, Legos, and he is very social with his friends, family and fans. Matt ‘s dream is to have his band become famous and tour the world singing original songs and a few good covers. Anyone wanting to help fulfill his dream should call him on his cell or message him immediately on Facebook. He's such a jokester.

COLE FREDRICK, RHYTHM & LEAD GUITAR/VOCALS - Cole Fredrick learned to play the guitar at the age of 8. He studied at the Pacific Conservatory for 2 years and became the lead guitarist in his 5th and 6th grade elementary school rock band. In 7th grade Cole auditioned at the Orange County School of the Arts (OCSA) and was one of 15 kids accepted into the Classical Guitar Conservatory. He performed in Flamenco, Jazz, Classical and Rock Guitar concerts for 4 years. He’s won Classical guitar awards from competitions in LA, IE, OC and Brownsville, Texas. 11&12th grades in High School, Cole moved to the Commercial Music Conservatory where he studied advanced guitar, singing, songwriting and Pro Tools. Outside of school, Cole was a guitarist for The House of Rock, Covina, CA for 3 years, performing at Disneyland and Disney’s D23 convention. Cole is a signed model at BICOASTAL MGMT, LA and Brand Models and Talent, OC. He attended California Institute of the Arts in the Herb Alpert School of Music. He completed the Guitar & Indie Artist Program at Musician's Institute in Hollywood where he recieved 2 scholarships; for 'Future Success' and for 'Melodic Soloing', given by the Guitar Department Director, Stig Mathisen.

NICK STONE, KEYBOARD/VOCALS - By age 4, after nonstop begging, his parents enrolled him in classical piano lessons. He quickly proved himself more skilled than the other kids in the class, most of who were years older than him. He continued to study classical piano at the Orchepia School of Music for 9 years. Nick eventually shifted his interest to popular music. During this gradual shift, he started writing music, singing, and teaching himself Pro-Tools. He became deeply interested in The Beatles who heavily influence his songs to this day. He auditioned and was accepted into the Commercial Music program at the Orange County School of the Arts as a freshman. His musical horizons broadened as he was exposed to many different kinds of music. Today, Nick is a student graduate of USC, Thornton School of Music who has a mature passion for writing, producing, and performing music, whether it be playing keyboard, Midi, Keytar, or singing. He is excited to have become so close with his Undecided Future band mates over his high school career and wants to continue developing as a band.

MATISSE PASILLAS, DRUMS/PERCUSSION/VOCALS - Matisse started playing Latin and African drumming/percussion as a toddler. He was surrounded by a diverse world of music growing up and was raised listening to a variety of black artists such as Tower of Power, The Brothers Johnson, Stevie Wonder, Michael Jackson, Parliament, Funkadelic, Bob Marley, James Brown, and the list goes on. At the age of 6 he started to watch films beyond his age limit behind his parents back such as the Saw Trilogy, Pulp Fiction, and many classic monster movies and animations. In middle school he played drums and percussion in the Long Beach Honor band, which featured a full symphony and orchestra. Matisse was influenced by his father who is a percussionist and drummer for many famous artists. In 2011 Matisse got accepted into the Orange County School of the Arts in the Film and TV department. Matisse’s personal interests include props, special effects and make up, gore and horror movies, Halloween, drawing and painting unique and quirky characters. He recently interned at Complex Media, a Hip-Hop online magazine in Hollywood.

CHRIS TRIMMER, BASS - Chris is also an Orange County School of the Arts graduated from the Commercial Music Department. Chris is highly skilled at Flamenco guitar, Classical guitar, Jazz Guitar and Pop/Rock Bass. He has currently started singing back up vocals with the group.

Summer Concert Series at the Museum

Supfine placed in the teen movie released on streaming in 2021

Co-produced with Dem Jointz, Grammy winner and hitmaker for Rihanna, Janet Jackson, Dr. Dre, Kendrick Lamar, and more, Undecided Future's third single of 2020, appropriately titled "Moments," is grounded in the truth of the times with echoes of an anthem of hope, prosperity, and strength.

"This song is dedicated to everyone around the world who needs a little light to lift them up," said the band. "Our daily lives are defined by moments. We all experience a wide range of moments, from our happiest memories to our darkest hours. "Moments" reminds us all to live fully in the present, to hold loved ones and strangers alike dearly, and always to cherish the beautiful moments we have in each of our lives."

LOOK UP - Now streaming on Spotify and Video on YouTube.

Find our first new single of 2021 now on all digital platforms.

New music has already been dropped by Undecided Future this year with many more songs to come! We are o excited to share all of our newly produced songs with Dem Jointzs of UMUWWA (U Made Us What We Are).

2019 Winners of the Young Entertainers Award

#YEA Recognized as up and coming young entertainers who are an inspiration to young kids to work hard and follow your dreams.

We released our new EP this month, with multi-platinum, grammy award winning producer, Dem Jointz. Super exciting! find it on iTunes, Spotify and all streaming platforms.

Youtube and ReverbNation both featured Undecided Future on each respective Homepage, creating fans of Undecided Future in Germany, United Kingdom, France, Sweden, Italy, Australia, Canada, Japan and all across the United States

After having played all 2017 at Disneyland and Downtown Disney and 2015-16 at Disney''s CA Adventure.

Winners of Best.Cover.Ever. with Jason Derulo. Over 6 million views on YouTube

Undecided Future revamped 3 of Jason Derulo songs and on the compeition. Interview in Billboard Magazine in December to follow.

Trevor's At The Track

Join the "Save Our Youth" family at the met for dinner, dancing, cocktails and music by Undecided Future to raise funds for SOY, Cost Mesa who's mission is to provide a safe and welcoming space for teens to find hope, to nourish a sense of self and an ability to grow and develop interests and skills to become productive members of society.

Once a month, we'll be at the Main Stage, Downtown Disney!

Located in the DTLA Arts District

California Institute of the Arts, Graduation