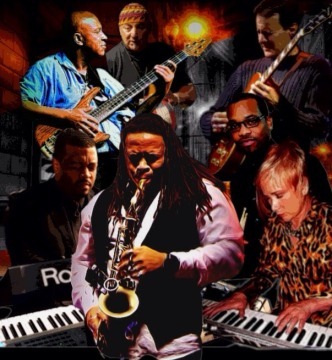 THE UTOPIAN DREAMS BAND is riding the latest worldwide contemporary jazz wave with their nu-groove sensibilities. This incredible crew of musical artists has been shaped by the San Francisco Bay Area and "live jazz" music scene over several decades. They credit their jazz evolution with nods to old school West Coast jazz, early 70’s Bay Area fusion and the contemporary jazz explosion. Their music is shaped by deeply orchestrated melodic chops expertly layered over the funk, hip hop, soul and Latin grooves of contemporary jazz.

Core members of The Utopian Dreams Band are:

All the tracks of our debut release "From Dreams to You" are blessed with the sax artistry of Eddie Baccus Jr., he is a core member of Utopian Dreams involved in also aspects of performance and recording production. Eddie was a core member of the international supergroup "Pieces of a Dream" and has a resume that includes playing with such luminaries as Rick Braun, Grover Washington Jr., George Duke, George Benson, Will Downing, Gerald Albright to name just a few...recently, we were proud to announce that Russ Ferrante, keyboard player and founding member of the Yellowjackets, will be working and recording with Eddie on his solo project due out at the end of 2014.
Joining the Utopian Dreams lineup in 2013 is guitarist Tony Darren debuting with us on "From Dreams to You...Tony garnered a SESAC national performance award as well as a Grammy consideration for best new contemporary jazz artist....Tony has worked with such diverse artists as Shadowfax, Tom Scott, David Sanborn, Jeff Lorber, Freddie Hubbard, Gregg Karukas, Alphonso Johnson, Joe Sample, Steve Gadd, Vinnie Colaiuta and many others. Now Tony is a core member of Utopian Dreams...

In the tradition of the supergroups of contemporary jazz, such as the Rippingtons, Spyro Gyra, Incognito, the Yellowjackets and Urban Knights, to name a few...The Utopian Dreams Band brings together a powerhouse of unique players who are accomplished performers in their own name but are drawn to the unique sound of the supergroup...thus The Utopian Dreams Band has evolved...magic