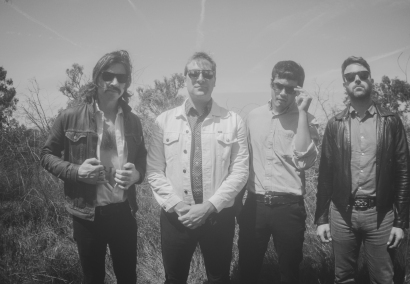 On MANIAC's second full-length Dead Dance Club the Los Angeles punk band creatively crack the whip on a world wasting its beauty on bad times and boredom. The twelve tracks snap and bop by like any high quality-cum-octane vintage could we change this to LA and Pacific Northwest punk but without any sense of nostalgia or fetish for a particular scene. The melodically layered and trade-off vocals of "Post Post World" and "Neutral Libido," the snarl-chants of "Children of the Dirt" and "Living in Stereo," and the controlled frenzy of openers "City Lights" and "Subject to Change" start the album and set the incendiary blaze of terse, sharp lyrics snarled and shouted to the breakneck tempos.

Dead Dance Club comes out June 1, 2018 on Dirt Cult / Hovercraft. Although coherent in style, every song sounds different on MANIACs follow up to debut Demimonde, its antagonistic elements learning to dance with its irresistible rhythmic frenzy. The band first came together in 2012 when Andrew Zappin and ex-Seattleite Zache Davis (The Girls, Cute Lepers) would hit the dark night spots of El Lay together, bonding over classic power pop and a passion for creating songs about 'weird times going pro' (as Hunter Thompson once wrote). Adding Justin Maurer (Clorox Girls, LA Drugz) on second guitar and James Carman (Images, LA Drugz) on drums, solidifying the line-up.

The band has four songwriters, Zache Davis (bass and lead vocals), Justin Maurer (vocals and guitars), Andrew Zappin (guitar), and James Carman (drums and backing vocals). Davis says of his tracks, "'City Lights' is really about the annoying dudes on the boardwalk who try to sell you their CDs. 'Neutral Libido' is post-relationship wave vibes mixed into a night of perceived bliss that ended in emptiness, and 'Living in Stereo' is a failed relationship." He extrapolates, "Most of the songs I wrote are about a failing relationship, loss, and self-depreciation and realization; with some sprinkles of characters who play frisbee golf and some who lost money on a prostitute."

For his contributions, Zappin infuses his compositions with hooks and atmosphere, and "I'll toss in some oddball chord variations here and there to tweak what are otherwise pretty classic progressions. The same goes for songs to which I contributed parts. I try to serve the vision, put a little of myself into the thing. Ultimately, no matter who wrote it, everyone has a hand and all songs become MANIAC songs."

Dead Dance Club was recorded at Station House Studios in Echo Park by Mark Rains; the band produced the album with Maurer taking a strong hand. As for Maurer's own writing: "It's current Los Angeles meets classic 70s/80s films like Blade Runner, Drive, Chinatown, LA Confidential, Over the Edge, Karate Kid, Lost Boys come to mind. My tunes come out of feelings of alienation, loneliness, heartbreak, restlessness, sexual frustration. 'Children of the Dirt' is about 'Lost Boys'-Peter Pan type tribal kids in a 'Lord of the Flies' situation. 'Post Post World' is about post-irony, how contemporary society doesn't believe in anything anymore." Dead Dance Club is whip-smart rock 'n' roll art created out of their surrounding milieu: "I love West Coast lit, film noir, and Latin languages," Maurer admits, "the mix of cultures in Los Angeles. Where else would you have Koreans eating Salvadoran food across from an Armenian kebab shop and a Thai grocery store?"

Outside of music Andrew finds a lot of inspiration in film and photography. "Most recently in the films of Yorgos Lanthimos (Dogtooth, The Lobster) and Ruben Östlund (Force Majeure, The Square). Both are telling different kinds of stories and doing so with a dry, oddball sense of humor that I like. Also, just got a book of photography by a war photojournalist named Michael Christopher Brown. The book is called Libyan Sugar and it's all iPhone pics from the Arab Spring fighting in Libya."

MANIAC were finalists in LA Weekly's Best Live Band in LA awards category. There is something quintessentially LA about them, even if their punk rock would have fit perfectly with any decaying, hedonistic City of the West trying to abuse its body to believe in its soul. In the meantime, before the end of the world, they plan to perform West Coast dates this summer and hopefully Europe by Fall. Or, as Zappin says, "I'd like to load the band onto the back of a flat bed and hit the road. We could play every Olive Garden parking lot from LA to Portland, Maine. I'd also like to play Japan. Maniac should have a 'Live at Budokan' moment." Those with ears to listen to Dead Dance Club will surely agree to that with a "hear, hear!"