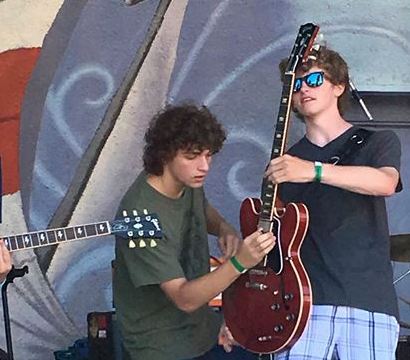 Zofolk was formed at Rock-n-Roll University during the Spring of 2014 and has performed at many impressive venues and have supported numerous charitable foundations.

In March 2015, Zofolk competed in The Your Big Break semi-finals at The Gold Coast Arts Center in Great Neck and won!!! In the April  finals they finished 2nd overall. This year Zofolk was asked to headline The Your Big Break Finals.

Zofolk has also performed at The Boulton Center for NYRMA's annual charity event. The Revolution in Amityville and The Best Wings Festival at NYCB Theatre in June, as well as The 2015 and 2016 Great South Bay Music Festival and at The Nikon at Jones Beach Theater.

Last November, Zofolk hosted The Run For The Warriors event for Wounded Warriors in Lindenhurst and recently have performed with Randy Jackson of Zebra and have hooked up with The John Theissen's Children's Foundation to help underprivileged children on Long Island.

In March Zofolk hosted St. Baldrick's at Napper Tandys to benefit the fight against childhood cancer.

In July 2016, Zofolk was honored to share the stage with Mike DelGuidice and Tommy Byrnes from Billy Joel's band and Big Shot at the Emporium in Patchogue NY to support the Suffolk County Crimestoppers in their fight against herion addiction.

Recently Zofolk has been writing original songs and their 1st CD will be released at the end of the summer.

Zofolk at Sayville SummerFest opening for Joe Rock and the AllStars

Zofolk at Country Corners in Setauket

Zofolk to open for Michael DelGuidice of Big Shot and Billy Joe;'s Band at the Emporium in Patchogue NY

Zofolk at Napper Tandy's in Smithtown

Zofolk at Shanahan's in Kings Park

Zofolk at The Backstage Pass in Ronkonkoma

Past Times in Kings Park

Zokolk at the Crooked Rail in East Northport

Zofolk at The North Tap

Zofolk at The Run For The Warriors

Zofolk with Randy Jackson at Toomey's

Zofolk at The Nikon at Jones Beach Theater

Zofolk performing at The Your Big Break Finals - April 18 2015

Zofolk performing at The Your Big Break Finals - April 18 2015

Your Big Break at The Gold Coast Arts Center

Zofolk competed in The Your Big Break at The Gold Coast Arts Center and won!!!

Your Big Break at The Gold Coast Arts Center

Zofolk at Katie's of Smithtown

Zofolk at Napper Tandy's in Smithtown

Zofolk at The North Tap In Mt. Sinai

Zofolk will be headlining The Gold Coast Art's Center Finale

Contact Information
Zofolk can be contacted by email at Zofolkband@gmail.com or through messaging on our facebook page: https://www.facebook.com/zofolktributeband.
Thank you
Information Request