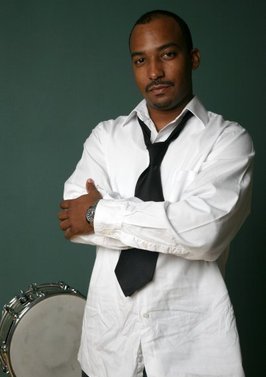 New Orleans is a good place to grow up as a drummer. The unique rhythm and funky back beat of the city's music become a part of life's imprinting process that gives a drummer a special feel for his subject matter. Drummer Adonis Rose is in that number of who share that advantage in working with some of the top jazz musicians from the Birthplace of Jazz.

Rose has played with some of the world’s most esteemed jazz artists, from nine-time Grammy winning trumpeter Wynton Marsalis to three-time Grammy winning vocalist Dianne Reeves to jazz/pop entertainer Harry Connick Jr., himself a three-time Grammy winner. Indeed, Rose’s beats reach further than the jazz world. Adonis Rose has performed with rap group Public Enemy, soul diva Chaka Kahn and the late R&B chart-topper Gerald Levert . Even before graduating from New Orleans’ Warren Easton High School, Rose was refining his skills at the New Orleans Center for Creative Arts (NOCCA) and jamming with the likes of Clyde Kerr, who headed the jazz program at the NOCCA, and Nicholas Payton, winner of the 1997 Grammy for Best Jazz Instrumental Solo.

Rose has released five recordings as a leader. On the Verge is his third recording on the Criss Cross label, following 1998’s Song for Donise and 1999’s The Unity. Adonis Rose and the N.O.Vaders and The Fort Worth Jazz Orchestra are his two latest recordings. Rose has toured and recorded with trumpeter Nicholas Payton, Irvin Mayfield and the New Orleans Jazz Orchestra, pianist Ellis Marsalis, and Harry Connick Jr. He also created and played the drum arrangement’s for Spike Lee’s HBO documentary, “When The Levees Broke: A Requiem In Four Acts.” Rose’s rhythms have been included on more than 50 recordings during the past decade.

Shortly following Hurricane Katrina Rose founded The Fort Worth Jazz Orchestra, Inc. and serves as it’s Artistic Director. Over the last three years, Adonis Rose has become a leader in jazz awareness, holding positions as Creative Director of Cadillac’s Jazz by the Boulevard Festival and Artist in Residence at the University of Texas at Arlington.

In February 2010, Adonis Rose received a Grammy Award for his performance on the cd “Book One” with Irvin Mayfield and The New Orleans Jazz Orchestra. Adonis Rose continues to perform all over the world, and just recently performed in Hawaii for United States President Barack Obama.