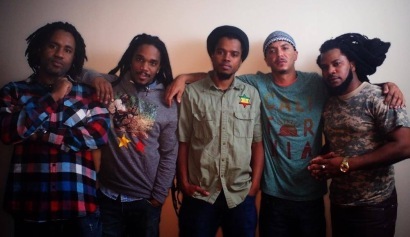 Afrika Rainbow is an award winner music group with roots in reggae, based on the principles of brotherhood, love for music and desire to spread a positive message to people in the world. The group members were born on the island of Santiago, Cabo Verde, but the band was created in the United States in 2005. The group aims to promote the unity of African people and attract attention to Africa and the world.
After ten years, the band has a large repertoire of original songs that blend the rhythms of Cabo Verde, roots reggae, hip-hop and African Diaspora music with lyrics that challenge the conscience. The group plays regularly in the United States, opening for renowned bands such as Midnite, Morgan Heritage, Kassav, Cabo Verde Show etc…
In Cabo Verde Afrika Rainbow was also invited to the Festival of Santo Amaro in Tarrafal in the years 2007, 2008 and 2010, the Gamboa festival in Praia in the year 2012, and the Festival of Santa Maria in the island of Sal in 2014, and Festival Pedra Tedja in Sao Nicolau Island. Afrika Rainbow was recently selected to showcase at the Atlantic Music Expo, one of the largest music market in the world, in April of 2016.
The band was twice nominated for the Cabo Verde Music Awards –CVMA for best reggae song and best band on stage, and won the award for best world music at the International Portuguese Music Award - IPMA.
Afrika Rainbow released their much anticipated debut studio album titled ‘Identidadi’ in july of 2014.