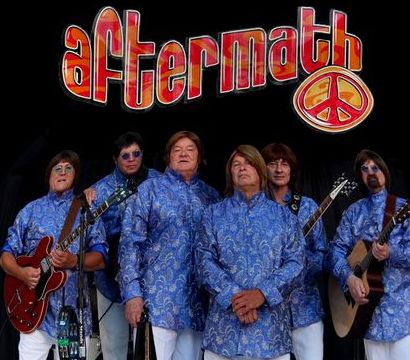 Aftermath – Experience the Sixties show recreates the sights and sounds of the 60s featuring productions of some of the most memorable songs from the 60s. Each set is devoted to a distinct era. The audience will see and hear British Invasion, Psychedelic and all things groovy.

Artist’s music who have influenced the band and are featured during the Experience the Sixties show include: The Byrds, Beatles, Hollies, Rolling Stones, Turtles, Grass Roots, Foundations, Paul Revere & The Raiders, Doors, Vogues, The Monkees and The Strawberry Alarm Clock.

Band members include Kim Pizzino (drums); Mike Allensworth (lead guitar and vocals), Tom Tasby (guitar and vocals), John Kopinski (piano and organ), Smilin’ Jack (bass and vocals) and Bob Cains (lead vocals), This group of talented musicians constitute hundreds of years of musical experience. Over the years you may have enjoyed their talent in bands such as Tasby Brothers and Greased Lightning.

Aftermath – Experience the Sixties has shared the stage with the likes of The Hollies, 1964 The Tribute, Peter Noone, The Vogues, Gary Lewis & The Playboys, The Buckinghams, 1910 Fruitgum Co. and several other national acts. Aftermath also performed shows as a featured headline act at festivals, fairs, community concert series events, rib burn offs and other public and private engagements.

While the song list is specific to a generation, the band’s following is multi-generational. For fan photos and additional information go to https://aftermathexperiencethe60s.com to learn more about the band.

My Interview with Kim Pizzino (Drummer of Aftermath, Experience The Sixties Tribute Band) 9/28/2021
(Q1) Who Inspired you to make music ?
In 1965 a friend of mine brought over his sister's Rolling Stones album , High Tide and Green Grass ( Greatest Hits ) and heard Satisfaction for the first time and I was hooked .
I knew I wanted to have hair like Brian Jones and play drums like " that guy " Charlie Watts.
The late Charlie Watts and Creedence Clearwater Revival's drummer Doug Clifford, are the two drummer's I admire most . They both have a " less is more approach " which is how I pattern my technique.
(Q2) Who would you most like to collaborate with ?
Because we do all cover selections and do not write our own material, it would be hard for me to say who I would like to collaborate with .
(Q3) If you could go open a show for any artist, who would it be ?
If I could roll back the hands of time to 1965 , I would like to open for the The Byrds. We always open our show with The Byrds , as I believe it sets the tone for the evening. If I could turn the clock back to 1967 , I would like to open for The Doors .
(Q4) How do you determine which songs you guys play ?
There is a certain criteria that we look for when we choose material to perform. It must be instantly recognizable , most songs we play were in the top 10 playlist when they were on the air . You may not know it is The Turtles , but you will know the song " Happy Together", you may not know it is Paul Revere and the Raiders, but you will know the song , " Kicks " and so on .
We hear all the time , " I remember my big brother or big sister having that 45 and playing it all the time". Military folks that were stationed abroad say " I remember hearing that song on USO radio" .
A lot of the songs we play have been a main staple of oldies radio stations , others have been used in a backdrop for a movie sound track , while others have appeared in commercials.
We all collaborate on choosing songs , when a list is made. We vote on the three or four we want to learn each year .
(Q5) What is your favorite song to perform ?
My favorite songs to perform , tough question as I enjoy all the songs that we play , because we are a very vocal oriented band I would say Turn Turn Turn ( The Byrds ) , Happy Together ( The Turtles ), and our Three Dog Night medley which consists of Shambala, One , Family of Man , One Man Band and Celebrate.
(Q6) Which famous musicians do you admire ?
I would have to say the musicians ( groups ) that I admire the most would be ( in no particular order ) The Rolling Stones, The Byrds , The Doors , The Association, and The Young Rascals .
(Q7) What is the best advice you've been given ?
The best advice given to me was from my Mom , " Follow your dreams , Follow your passion ". She was my biggest fan .
(Q8) If you could change anything about the industry, what would it be ?
I think one thing about the industry that I would change is the monetary end of it . No matter what style of music you perform, there is a lot of hard work and effort put into it to really make it shine .

Aftermath, Experience the Sixties will be rockin the band stand in Lancaster, OH from 7:00 p.m. to 9:00 p.m.

CANCELED DUE TO WEATHER ... WATCH FOR NEW DATE

4th of July with Live Music from Aftermath

Aftermath, Experience the sixties is proud to once again be a part of this family friendly, fun filled day.  Get this one on your calendar! We will be performing from 7:00 p.m. to 10:00 p.m.

Aftermath, Experience the Sixties, returns to the Guy C. Meyers Bandstand in Ashland, OH performance time is 8:00 to 9:15 p.m.  See you there!

Aftermath, Experience the sixties loves being a part of Pemberville's free fair.  Parade,  concessions and rockin music.  We look forward to seeing you there. We will be performing from 8:00 p.m. to 11:00 p.m.