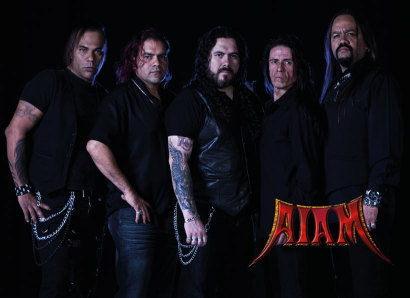 AIAM is a band of heavy rock-Hard Rock, which has been found in the fusion of influences, a unique sound characterized by led compositions from piano, to the rocker arrangement ; drums, pianos and organs, strings, electric guitars, bass and vocals, are the means by which AIAM surrenders to the listener, produced 100% in Mexico, AIAM delivers to its public a disc full of feeling, full of experiences of life, which range between the nostalgia of losing someone, to the blind love through that he makes us live and dream, and in this case, compose music, thinking about how always to tune in to the human part of the people who listens to him. Passages of passion, of sadness and reaffirmations of life, they are those that they accompany to ANGEL, the last delivery record of AIAM. We hope you enjoy it.

AIAM was born in the year of 2008 when Adrian poison Guevara (bass), Alberto Cano (drums) and Daniel senderovich (guitar) start to rehearse in a regular way in rooms of professional study, subsequently integrates Mike Glez. (voice, composition and keyboards) to give the definitive and distinctive sound of the band, AIAM. launches his first LP in 2009 playing this year in 54 locations in the city of Mexico and other cities of this country, promoting this album, AIAM finds its way by sharing international stages with bands such as EPICA in February of 2011 with great acceptance of the audience, AIAM continues over the years as a band of Heavy Rock 100% Mexican, which defends the banner of the heavy in Spanish, And a banner of quality in composition and vocal arrangements, all the members of AIAM. have been in professional jobs such as session musicians and as teachers of their instruments. In the year 2014 Mike Glez picks up the composition in the direction of the study and producing at LA ROCKA PRODUCCIONES where AIAM recorded his second LP, in this occasion would renovate the blood of AIAM with new members, Cesar Vizcarra (guitar) and Diego Rojas (keyboards) ,subsequently flees Diego Rojas, to integrate into the keyboards Miguel Angel Gentleman to start their plans of promotional tour throughout Mexico and with the objective of internationalization.

AIAM discovers his sound, rediscovers his soul raised voice in the darkness, the heart is the source of all desire, and AIAM. as a Phoenix, it is reborn in this second production, ANGEL.

For all business, and booking in EU and europe and promotion inquiries, please contact: