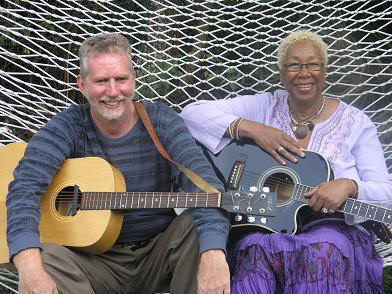 The acoustic-based music of aka Level Seven features captivating harmonies and rhythmical acoustic guitars with roots in folk-rock, adult contemporary/island, and inspirational variety pop. Chris and Daya Devi-Doolin (aka Level Seven) met as street musicians in Philadelphia, where they performed as part of an acoustic funk street act. The group parted company at the end of tourist season, and Chris and Daya continued on as a duo. They evolved into folk music, country music and onto a contemporary acoustic/rock/folk/pop/variety sound. Since that time, they have have become recording artists who perform their unique blend of soaring harmonies and pulsating rhythm with great success. Along the way they have received awards for their song writing and vocal talent.

Details The fascinating musical journey of Chris and Daya Devi-Doolin started when they met as street musicians in Philadelphia, PA. It was there that they discovered the unique gentle yet rhythmical sound that still defines their music today. In Philly, they joined with other street musicians to form the acoustic funk group, the “Street Players”. Chris brought his creative guitar skills to the mix and later incorporated his keyboard training into their sound. They soon found when singing on the streets that Chris’s mellow voice complemented Daya’s sweet sultry vocals to create a distinctive balanced harmony. Daya’s rhythm guitar filled out the mix nicely. Their first intriguing year together is an amazing story that is recounted in more detail in their book "Smile America." Recently they worked with Grammy award winning producer Maurice Starr on their second CD, Smile America. But that connection has it roots in Boston, where they performed on the same stage as Maurice and received an award for the song Momma at the 2nd Celebrity Awards Show. Their days in Boston included work with Good Company Productions, who helped distribute their EP, Sides of Love. They were members of the New England Songwriters Association and performed at showcases and concerts with that group. They remember recording their songs at home, in a local attic studio, at SMAP in Somerville, MA., and in a converted chicken coop in rural Mass. After their street playing days ended, they had hitchhiked their way throughout the northeast and performed at Folk City in NYC, clubs in Atlantic City and eventually moved back to Chris’s home area of Boston. A chance encounter at a laundromat bulletin board in Ayer, Ma. with a home for sale in Florida set in motion a chain of events that eventually brought them to Central Florida, which they now call home. They received the name for their duo Level Seven (later aka Level Seven) while meditating in their living room. They have performed as this duo throughout Florida at clubs, festivals, coffeehouses and concerts. Chris graduated in recording engineering at Audio Recording Technology Institute (ARTI) and Daya took online classes with Grammy award winning engineer John Lowson. They used these developed skills to work on their first CD, Level Seven . Chris reconnected with one of his instructors at ARTI, Steve Reel, and Chris and Daya joined to expand the cover band, Steve Reel and the Reels and the original progressive world-rock band, SkyEarth Orchestra, was formed performing Steve’s original tunes and Chris and Daya’s as well. All the while, the Doolins have maintained their identity as aka Level Seven. Through a series of serendipitous events, they were introduced to Grammy award winning producer Maurice Starr, who lived two towns over from their Central Florida home. At the time, they had a series of songs ready and began work on their second CD which evolved into the name Smile America . Daya is an award winning author. Her group project Americans Saving Ourselves Together developed the idea that Americans can work together to pull themselves out the depression we currently find ourselves in, and smiling is one key ingredient. A series of life experiences have molded Chris and Daya’s music in unique ways. Here is a listing of some key elements that have found their way into their life and music: spirituality, Americana, dreams, humor, alternative healing, yoga, acoustic based music, miracles, abundance, prosperity, synthesizers, A Course in Miracles, harmony, metaphysics, folk, consciousness, nutrition, love, awareness, MIDI, Reiki, Rebirthing, rock, Whole Light Fusion, Matix Energetics, country, Bodytalk, roots, transcendence, pop, Universal Mind, myth, Science of Mind, Unity, new thought and inspiration. Their songs are down to earth but they reach to the heavens. The Doolins hope you find a connection on some level to their music and work. Each of us has a unique story to tell and we’re given a special place within the fabric of life. Chris and Daya have taken what they have been given and molded it into their own unique approach to music and songwriting. Their story still evolves and unfolds with the current incarnation of the Smile America project. Part spiritual quest, part comedy script, their musical life spirals onward. They thank you for taking the time to discover more about their musical journey and hope that it inspires your life’s experience as well.