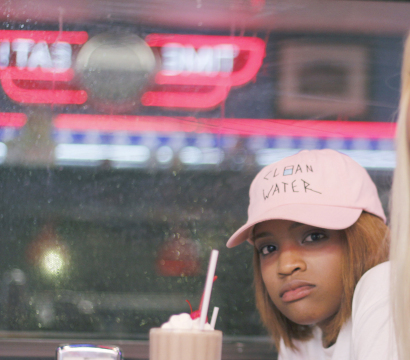 Sometimes, that fate provides us with the insight to guide us in the direction we never knew we were intended to go in the first place; provides a sense of purpose. Stability. Much needed stability, and focus.

Case in point: Imagine the story of a little girl from New Orleans, doomed to a life of foster care at the tender age of 4, being bounced from home to home by a system that shows no regard for her stability or overall well-being. Before she even reaches her teen years, she's been to more households than she can recall, not to mention, in and out of schools at a dizzying pace. She's helpless, with no sense of purpose. Can you imagine, a little girl, filled with SO much frustration, fighting SO much, that spending an afternoon with a social worker becomes a weekly routine?

She needs a breakthrough. Ambré Perkins needs to find herself. Her purpose. Her fate.

Well..."fate" finds HER, in an unlikely incarnation; one she'd probably never thought possible herself: Music.

Who knew that hearing Brandy on the radio, in her psychiatrist's office, would be the beginning of it all? Thru session after session of being uncooperative, Fate provided the icebreaker.

A now 7 year old, somewhat self-assured singer in the making, is back in New Orleans, and in the choir.

By 14, as a freshman at McMain High School, Ambré is singing solo at a pep rally...IN FRONT OF THE WHOLE SCHOOL. Can you feel her nervousness? Imagine that nervousness being washed completely away by a feeling of success and completeness, as the crowd screams and applauds a job well done. This is her fate. This is her purpose in life: to SING!

By senior year, the principal of Bonnabel High School is praising Ambré for having an amazing voice, and the new task is singing the national anthem for her graduation. Obviously, Ambré has come a long way from uncertainty and instability.

A setback: She's hoarse. But it doesn't stop her. Ambré is focused. She's confident in herself, and her ability, face to face with her fate. She sings thru the pain, overcoming yet another obstacle, with the same determination that carried her thru 18 years of life...and the crowd ROARS its approval. Success!

Fate shows its hand yet again, in the form of producer/engineer Erick "Duende" Bardales, to help her craft the sound that the world is poised to hear today. Having never recorded as much as a single song before, through Duende's careful guidance and musical genius (as well as citing influences such as Michael Jackson, Chris Brown, and...you guessed it...Brandy), a whole project is completed by June of the same year.

Fate brought her here. Stability, a sense of purpose, and the proper guidance has KEPT her here. And now? Well...the sky's the limit.

Ambré Perkins is ready for the world. One question remains: is the world ready for Ambré?

As of 4/20/2015, Ambré has released her first full-length project: a mix tape titled "Wanderlust". Her work has received the praise of several music label executives, as well as media outlets, such as Revolt TV. With her online buzz grabbing the attention of another up and coming artist, Kehlani, Ambré received an invitation to further the Tsunami Mob Movement. From there, they quickly collaborated to create an alternative version of "Preach"; an online hit that landed young Ambré a spot on Kehlani's "YSBH Tour". Ambré is now set to ride her own wave of momentum, with the release of her latest work, "2090's" set for a release date of April 20, 2016, starting with her first single, "Goody Goody", released on March 9, 2016. Still very much an independent artist in her own right, "2090's" is the project with the potential to stamp her ticket to inevitable superstardom. When asked what she would love to accomplish with this project, her goal is simple: "I'd like to bring a Grammy back home to New Orleans." She is well on her way.

Update Required To play the media you will need to either update your browser to a recent version or update your Flash plugin.
Download Download
Back
You Tube
Contact Information
Information Request