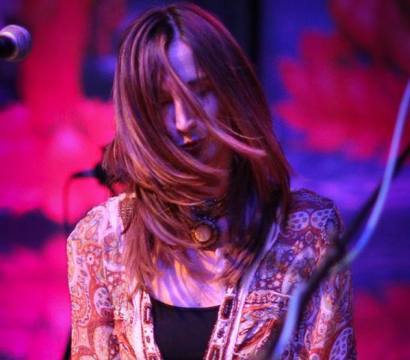 Amritakripa has been a staple at the Bakti fest since its inception. However the kripa band has now grown to become a highlight of the festival, with their midnight trance dance groove set. KISS OF BLISS is Amritakripa’s 3rd release in a series of ground breaking albums in the world of Kirtan.

From their first recording MOTHER’S GRACE, Kripa and Robbi began uniquely blending cultures and instruments such as harmonium with the Saraswati vina, African and Turkish drums, saz and oud, and chop sticks on bottles and pans.

Amritakripa’s second album DANCING LOTUS is considered by many to have been innovatively and musically way ahead of its time in the Kirtan world. With Amritakripa’s love for sacred dance it was only natural that the traditional kirtan forms would begin to dissolve into the deep grooves of an ecstatic trance dance evoking the spirit of Gabrielle Roth.

Robbi has been recognized world wide as being an early pioneer of world music.  Since he grew up in Africa the drums and the trance dance grooves have filtered into all the music he has made.

Says Robbi “When I first heard kripa singing, I was blown away by the control she had of the Mayalam and Sanskrit languages - she wasn’t just singing the easy words like Gopala, Krishna, Ram ram etc, she was articulating very complex grouping of words in a rapid fire. If you hear her on the Dancing Lotus album singing songs like Krishna Mukti, or the Tirrukatakal tune, she is so fast and clear and she pronounces with such perfection as if she were born into the language. And then there is her voice, her voice quality. Well we joke with her, telling her she sounds like a 1000 year old little Indian boy”

"Thank you for that amazing evening of pure magic. Kripa's voice is other-worldly and one that must be heard!"   Jody Post Thiessen

Since moving to the desert Kripa has been playing ambient keyboards in the critically acclaimed psychedelic space rock band 3rd Ear Experience. 3rd Ear Experience’s last album Incredible Good Fortune reached the top 20’s on charts across the world and was hailed as one of the best albums of 2014. So when it came time to record a new album it was a logical transition for Kripa to turn to 3rd ear experience to handle the music.

So it is only natural that on KISS OF BLISS Kripa and 3rd Ear Experience would venture into the world of African psychedelia music which comes natural to Robb,  fused with Kirtan,  which is Kripa’s home ground. Immediately from the first song you hear the kwela style guitar that originates in Rob’s homeland South Africa. In Shambo we hear the north African guitar style, by way of Ali farke Toure, and the chant reminiscent of the African women’s choir of southern Africa. Kripas vocal orchestrations ranges from a unique blend of African/Indian nuances to colorings of Bulgarian choir soaring over Fela Kuti like bass lines that in themselves lay down the foundation of a deep trance.

Says Kripa “ for years now I have felt the inner tug to dance my prayers, and to express my devotion through my body and so become one whole devotional experience that reaches beyond words.”

With the KISS OF BLISS Amritakripa once again pushes the envelope of kirtan and devotional music. The last song on the album called I AM, one could hardly call it a song, rather an atmosphere of musical prayer. I AM is a lengthy piece especially suited for yoga classes. The chant based on the Divine name ‘I am that I am” is a blend of ambience, African groove and chant that sounds like it is pouring out from the Goddess of infinite space herself. This surely will get the serpent kundalini to rise.

"Amritakripa’s music is the sound of new kirtan, perfect for conscious party, ideal for the devotional dance."   Babaji

Contact Information
For booking shows and or scheduling interviews: