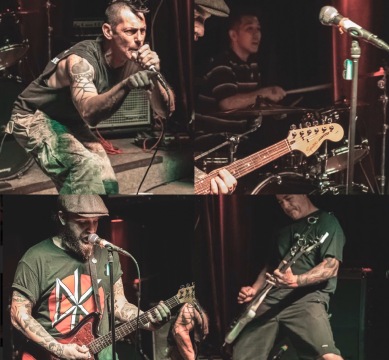 "ANTI-MATTER is a sight to see.  Straight ahead ultra fast melodic punk rock with ties to L.A. and Hawaii.  With 4 albums under their belt and a third on the way, they never disappoint.  Thier frontman is a witty crowd pleaser and the music can hold it's own with the best of 'em, both here and abroad" - Jason Miller, 808 Shows

This group has made a name for themselves in the islands, and word is quickly spreading to the mainland.  With their roots in L.A. and their hearts in Hawaii, ANTI-MATTER plays some of the fastest, meanest, and tightest punk rock available anywhere.  But it doesn't stop there.  Matching the intensity of their music, this group delivers a high energy stage performance that is engaging, enthralling, and always has the crowd eating out of their hands, screaming for more.

Transported straight from early 80's L.A., where punk was still punk, ANTI-MATTER is here to destroy you.

Album release, " From here to Anarchy"

New Album "Drop the Bomb" will be out June 12.  We are super stoked on this one, get ready!

PHOBIA with ANTI-MATTER in riverside CA

ANTI-MATTER with Since We Were Kids

ANTI-MATTER,PUBLIC NUISANCE, SINCE WE WERE KIDS.

ANTI-MATTER with The Infirmities.

ANTI-MATTER with The Infirmities