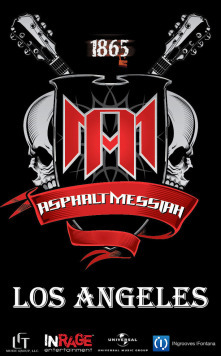 Asphalt Messiah is band out of Los Angeles (Distributed globally through Ingrooves/Fontana/ Universal ) that is a true Hybrid of Rock/Hip Hop (Rock Married to Hip hop and dates R&B on the side!)! They all hail from different points in the country, but have collectively come together to bring the masses unity through their music. Members: Kacy "Guitar Pimp" Jones ( Guitars/founding member), Bruce "Automatic" Vanderveer (Lead Vocals/Producer), Bryan "Bass Beast" Talbot (Bass in yer face!), Lukky Martin (Drums) . Global Fan Club: Asphalt Militia

Asphalt Messiah speaks to us ALL and not just the Few. So, we have come together like 'VOLTRON' to spit the Truth in a language that we ALL have been waiting to understand. The sweat, blood and tears of struggle, pain, and oppression are the elements infused in our musical expression. It is the single soul of OUR humanity that annihilates the destructive insanity of racism, sexism, and all that divides, and is what creates a harmony in our music and all of our lives!

The new single "Let’s Get Dirty2Nite" by Asphalt Messiah is a refreshing take on a steamy monogamous encounter cleverly fused with antidotes using current digital and social networking terminology. Prerelease promotions for the song which features a rhythmic dance beat began Monday, January 7, 2013, to Rock, Lite Rock, Adult Contemporary and Urban radio stations throughout the US and Canada .

Asphalt Messiah will be in studio on Indie 100 radio performing live on the air.