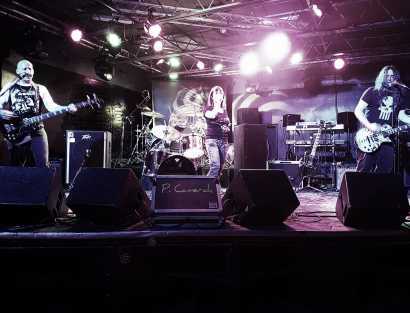 Battered Egos is a Rock/Grunge/Alternative band out of Niagara Falls ON!

"We have found a great connection with each other which allows us to be expressive and creative together. We are now embarking on the journey of writing and recording and soon the cover songs will be a thing of the past. We live to rock and we love to perform for all who will enjoy us and enjoy what we have to offer." -Christie Hails

Battered Egos is a very tasteful rock band. The band is so well rounded, diverse and enjoyable for all who attened their shows. No matter the size of the venue this band is known for a soild crowd anywhere they go. People tend to come out to see them out of curiosity, and end up becoming faithful fans and show up to all shows in their area. This is a trend for the band. They are very easy going and a lot of fun to watch and work with. They extend their fan base into friendships and are very personable with the people that they meet along the way. Not one bad review has been received about Battered Egos, all they ever hear is "When will you be back?"

Bobby B on Bass and Vocals

Darcy Trenholm on Guitar and Vocals

We are honored to be invovled again this year at the 8th annual Sick Kidz for Sick Kidz fundraiser in Niagara Falls ON. There is an amazing line up of bands and comedians to keep the night filled with entertainment. There will be a raffle tables and all proceeds from that will be going to Tender Wishes. Always a pleaseure helping the kids.

We are very proud of our latest single "Daddy's Little Girl" The response from this song has been overwhelming. We are offering a rare purchase of the song. If you wish to own the MP3 it will cost $2 and directly sent to your email via Battered Egos. This song is not available on any downloading platform nor is it on disc.

The THUNDER is BACK!

As you may know we have been having amazing drummers play with us over the last couple of years, following the departure of Stevee " Thunder" Campbell, back in the spring of 2015. He had many projects on the go and needed to back off and complete what he had started and then take time for himself.

Well we are so exctied to have him home! Stevee isn't just an extrordinary drummer, he is a huge part in our creativity. We are looking forward to our future and the completion of our next album.

We have merch coming in.. as of right now we have T-shirts and buttons for sale

We would like to welcome Vinnie on drums! He is a fantastic musician and is going to be an amazing part of Battered Egos! We are very excited for the future!

We have been writing. We are setting a goal to have our 2nd album complete by spring 2017. We are taking our time.

Brian has landed a sweet job with Air Canada so we will not be seeing him on stage very often. Most likely not until next year or for special appearences.

The band has certainly made a mark. Over the past 2yrs having shared stages with bands like April Wine, Kim Mitchell, Die Maniquinn and CJ Ramone. They continue to work hard, writing lots and booking shows across Ontario, Canada.

We are pleased to offically announce that Brian Swayze and Jason Blaize of joined us on this rock adventure. They bring with them such power and styles we have been searching for. Brian has been working with us since the end of September and Jason has been with us since mid October. We are finding an amazing sound together and are working on our new material for the next album. Details to come!

We would like to say farewell to Stevee "Thunder" Campbell (on drums) and Mr. Christian B. Rawkopolis as they both have retired from Battered Egos to pursue other adventures. We love them and fully support their decision.

We would like to welcome back our drummer who helped to shape and create Battered Egos... Mr. Kyle "The Animal" Foy!! He is a killer drummer and we are honoured that the timing was right for his return and we look forward to our journey with him once again!

We have made the top 7 Indie weekly countdown on the BS Live show on MaxInk Radio. Coming in at #2 with Selfie

Battered Egos has been greatly supported by an internet radio station called maxinkradio A top DJ Phoneix Camarah discovered Battered Egos back in 2011 and has been pushing and supporting the band. Now with the album being aired weekly, listeners and supporters casted votes on who they would like to hear make it into the end of the years indie countdown, with bands steming from Wisconsin IL to Niagara. The band had 2 songs requested and both landed in the top 20 placing in at: #17 with Selfie and #13 with In My Mind. What a great way to end the year and with only having the album out since the end on Nov. 2014. GREAT Accomplishment!

Battered Egos will be booking shows all over Ontario and looking to expand their travels to other provinces across Canada. The self tittled album "Battered Egos" has been very well received and is selling regularly in person as well as online through iTunes,Xbox and Amazon Music. The album is so diverse and shows the many different styles and talents of each member of this band. Not one song sounds the same as another, making it hard to stop listening to. Great reviews and even a couple of songs chosen by listeners of MaxInk Radio (internet radio) to be in the top 41 songs of 2014. A few other stations have picked up the album and have been airring songs regularly. This has been a great milestone for the band thus far. They can't seem to keep any merch as their T-shirts are selling as fast as they are getting them in. In 2015 the band hopes to record their second album. They have been writing non stop on this album since the end of summer 2014. Shattering crowd records at different venues and gaining new fans everywhere they seem to go, 2015 should be a very successful year for the band.

TIMMINS - Being a musician is hard work. Just ask most of the players from this area.

However, in the last 10 years or so the idea of getting on a reality show and making it with little experience has grown in popularity. It is also has been what I consider the reason why most of the reality show winners don't have sustained careers.

Some, but not all, seek instant success without putting in the hard work.

It's no guarantee, but most musicians are willing to practice, work at their chops and from that build their own career or passionate hobby.

After that work ethic, there is nothing like returning to your own city to display your talent for a CD release party.

And 39-year-old South Porcupine native Robert Bonato is doing just that when he comes home with Battered Egos, a band for whom he is the bassist.

He started playing music as a hobby and now is a full-time musician.

Bonato and the band are releasing their seven-song, self-titled debut CD this week and will gig at The Victory Tavern on Nov. 28 and 29.

The group's sound is uptempo alt-rock and ,as of now, Battered Egos has released a single to Apple iTunes entitled All Is Fair In Love and War.

We connected via email for this interview.

Emms: You mentioned you grew up in Shillington. Did you play in any bands when you were up in the Timmins area?

Bonato: Yes. The family moved to South Porcupine in the late '70s. We moved to Shillington mid '80s.

Yes I played in a band with my step-father Ken Ramsay, Marcel Couture and Walter Davidson, all of South Porcupine. I began playing the bass in their band when I was 17. They are the reason for me playing bass to this day.

Emms: How long has this band been together and is everyone from the Niagara region?

Bonato: Battered Egos formed in August 2010. We have had a lot of talented musicians in the band over the years. We are all from the Niagara region.

Emms: Who writes the songs in the band and how long have they been writing songs?

Bonato: The song writing and composing is a favourite time. We all participate. Off of this first album the songs have mainly been written by Christie Hails and Darcy Trenholm with the exception of two tracks.

Corey Skrtic of South Porcupine composed the music for All is Fair (lyrics by Bobby B) and Out of Reach (lyrics by Christie Hails).

As for how long anyone has been writing for, I'd have to say years. As musicians, this is something you just do.

EMMS: Growing up your with family in South Porcupine, was anyone a musician?

Bonato: There were a few musicians in the family when I was growing up in South Porcupine and Shillington. My step-father Ken Ramsay is a guitarist, and my uncles Burt and Marcel Couture are excellent harmonica players.

I've watched them play from a very young age, and it is what got me into playing music for a living now.

The band is asking fans to bring a non-perishable food item to the shows at The Vic in support of a food drive for the Lord's Kitchen.

The Victory Tavern, Timmins ON, Canada

The Victory Tavern, Timmins ON, Canada

Battered Egos Getting a lil Irish On!

Party with Battered Egos at the Vic

Back at the Dainer

The Victory Tavern Timmins ON

The Victory Tavern Timmins ON

The Payoff Tour with Kings English

Lady In Black tour with Noise Floor and We Are Ardent

Musicians and Friends Unite For Taye

Sessions on the River

Sessions on the River