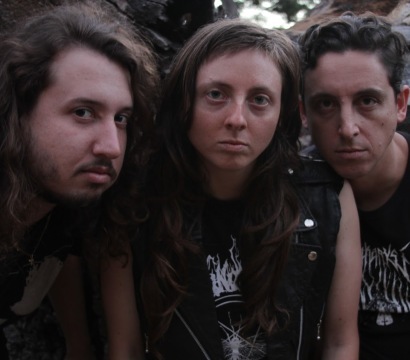 Formed in 2010 by two friends Ally Levine and Dylan Marks, Beekeeper rises from a mutual love and sincere respect for heavy music.

Bonding over classic albums such as Slayer’s “Show No Mercy” and Sepultura’s “Arise,” Beekeeper was inspired to create and play music that was influenced by their favorite aspects of metal. This accelerated the bands efforts and by early in 2011the duo began playing local house-shows and bars throughout the San Diego area.

Multi-instrumentalist Adam Wollach joined Beekeeper in 2013 as their full-time bassist. This three-piece was finally ready to shred with the complete sound they had always envisioned.

It didn’t take long for Beekeeper to ignite the local underground metal scene, where they have been bringing their high-energy performance to increasingly bigger stages including several shows with international touring bands like Cattle Decapitation, Brujeria and Warbringer.

Beekeeper’s songs are based on life experiences and their twisted imagination. Forged over many late-night writing sessions, their songs are delivered by Levine’s dynamic vocals and sinister guitar-work in concert with Wollach’s intricate accompaniment and Marks’ powerful drive and technical prowess.

In 2015 Beekeeper entered the studio to begin recording their first studio album, the full-length “Slaves to the Nothing.” With its upcoming release, the trio has plans for a 2017 tour. This aggressive, dynamic and innovative album will push Beekeeper into another zone and will be a huge step in their evolutionary quest to bring their unique sound and old-school style to the world.

Beekeeper, a local San Diego thrash metal outfit, has been slowly making some waves down here. Their drummer, Dylan Marks, really does not need much of an introduction to the scene. He plays in a handful of well-established acts down here, and not to mention is an incredibly talented drummer. I spoke to the group and they mentioned that they have been around for years, but really did not get serious with the project until late 2016.
Their performance, which promoted their brand new debut record ‘Slaves to the Nothing’, really drew in the crowd. The power trio, fronted by vocalist and guitarist Ally Levine, encompassed a wide range of thrash metal. One could hear flashes of Sepultura and sprinkles of Slayer, washed down with some Kreator and Pantera. The band is not necessarily flashy, but they have this uncanny ability to transition well in their song structure. The vocals complement the band’s sound well, and they accomplish what they set out to do. An in-your-face thrash attack that in an almost visceral way, draws you closer to the band on a personal level. Levine would growl and shriek in the songs, and then give the crowd a dainty “check out our merch” showing a completely different side of her.
Their overall performance went really well. Marks’ drumming ability helps fill out the speedy chugging riffs and prevents it from becoming stale. The song ‘Vargas’ really encapsulates the bands high level of musicianship and their ability to navigate leaps and bounds in different metal genres. The song ‘Vegeta’ slowed down the speed attack, and sounded like the band could emulate the more industrial and even grungy sounds from the ’90s. But before you think that the band is going into a nu-metal tune, they jump right back into their classical thrash roots. Well done.
The band looks to set the bar really high. Levine and Marks mentioned that they contacted an agency to book a tour along the west coast during the summer, and will continue to keep performing throughout Southern California. Keep your tabs on this band because I certainly have high hopes for them to make a name for themselves in the thrashverse.

Amy K. & Bella B.
Beekeeper
Thrash metal trio Beekeeper have released their debut album. It’s titled Slaves to the Nothing, and it’s been a long time in the making. The band—which comprises drummer Dylan Marks (also of Eukaryst), guitarist/vocalist Ally Levine and bassist Adam Wollach—has been playing shows since as early as 2012, but recently ramped up their activity, recording their first album in late 2015, which is now seeing the light of day.
In a phone interview, Marks says that the band’s music ultimately came out of a shared love of vintage metal between himself and Levine.
“We both were definitely into the same music—’80s metal like Judas Priest, Slayer and Sepultura,” he says. “We’ve been friends for a long time so one day we just started taking it super seriously. And eventually we told Wally, ‘you should play bass for us.’”
Slaves to the Nothing is more immediate and catchy than Marks’ other band, Eukaryst, though it shares a common intensity. Ultimately, however, the band’s old-school influences shine through, given a modern update via contemporary production techniques. For Beekeeper, there was never any stated objective to stick to any particular style of music, though Marks says you can definitely hear the bands they love in their own songs.
“I’ve never been the kind of person to say ‘I want to be in this kind of band,’” he says. “But also, we’re all heavily influenced by stuff like old Sepultura, so the stuff that inspires you, it’s gonna come out in your music.”
Though Marks has played and continues to play in other bands, Beekeeper is a special project to him because he provided the bulk of the songwriting for the album.
“I’ve always been really excited about all the projects I’ve done, but they’ve never been mine, exactly,” he says. “I definitely did the majority of the songwriting on this album. It’s my baby.”
Beekeeper are playing a San Diego Metal Swap Meet after-party at Brick by Brick on Saturday, April 29.
March 29, 2017 Issue
by Jeff Terich
March 29, 2017 4:05 PM
- See more at: http://sdcitybeat.com/music/notes-from-the-smoking-patio/beekeeper-release-debut-album/#sthash.IwiXXyYC.dpuf

BEEKEEPER opens for BRUJERIA and CATTLE DECAPITATION at BRICK BY BRICK

BRUJERIA INCITES A REVOLUCIÓN AT BRICK BY BRICK
OCTOBER 27, 2016

First up in this grand festivity were local thrashers Beekeeper. Don’t be fooled by front woman Ally Levine, she may be petite but her gutteral growls will fling you back to the stone ages whereas her high notes will suck you back to modern times and into the heavens.

Levine adds a unique touch to the thrash genre by showcasing her impressive ability to switch her vocals and adding a raw and primal touch to it. Levine along with bassist Adam Wollach and drummer Dylan Marks are on a mission to bring back some grit to the genre.

BEEKEEPER Show with SUPERJOINT and Special Guests @ Brick By Brick

Official after party for SD METAL SWAPMEET with SUPERJOINT, BATTLECROSS, CHILD BITE, and SITE UNSCENE.
Will be held at BRICK BY BRICK 4/29/17