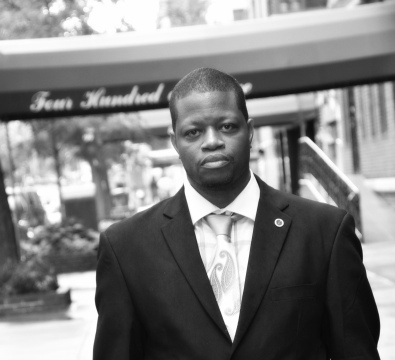 Ron “B-Stinger” Savage was born in 1965 and raised in The Bronx section of Castle Hill. As a teen, he attended Allied E. Stevenson High School and finished with his GED at the age of 18. Intrigued with music at a very young age, Ron and his sister would attend functions in their local park-as their parents would not allow them to go outside of their neighborhood. As the two matured more, they were then able to accompany music notables DJ Jazzy J and Bam, and from there, they fell in love with Hip-Hop. So in awe of this new developing culture called Hip-Hop, Ron and his sister hung out with members of the Zulu Nation. The Zulu Nation is an organization that stands for peace, love, and having fun. It is all about music and break dancing. It is about the culture of Hip-Hop. After seeing DJ’s spinning at his local park, Ron wanted to be down. “I became a member of the Zulu Nation in 1979 (Age 14) and went by the name B-Stinger. Originally, I was called Ronald B, but other members saw B-Stinger as the more fitting nickname. I was truly a bee because I always tried to sting the ladies (get their attention) back in the day like a bee, so that’s how I got the name”, recalls Savage. Ronald was among the main chapter of the Universal Zulu Nation Council from The Bronx River Houses in New York City. Later in the 1990's, B-Stinger -aka- Ronald Savage worked for DJ Jazzy Jay and Rocky Bucano at Strong City Records/MCA where he became known as a “go-getter” in the music industry. After three years, B-Stinger left Strong City Records to work for Dick Scott Entertainment where he handled the careers as an Artist Liaison for Snap ( I Got The Power), Show Biz & A.G. (Soul Clap), and Doug E. Fresh (Busting Out) just to name a few. When Scott went on to manage Boyz II Men and New Kids On The Block, he focused only on those acts and Savage’s services were no longer needed. This was also due to a decline in sales. Progressing, he then managed a 3-guy R&B Group called Motif (London/PayDay/Polygram Records). In 1993, he helped them market and promote their debut album, “More Than Magic”. The group’s single featuring Positive K called “You Told Me", did extremely well on the charts. They opened frequently for several established acts of this era like acts such as H-Town. For two years, Ronald would grind it out and endure the highs and lows of the industry. Between the music industry’s constant changes and the juggle of emotional issues stemming from his teen years, he became discouraged and left entertainment all together.

Moving on, Ronald did security in a residential building in the Bronx called Noble Mansion. For well over ten years, he became a staple in that particular community. “When I was doing security, I wanted to clear my head and refocus. My job treated me well, but I was too comfortable. As a security guard, I started to take an interest in the building, community, and the neighborhood”. While working at his post, Ron started to take notice of various things going on in the community—thus the birth of his monthly newsletter, “Buzz Entertainment”. This monthly publication concentrated on local entertainment and neighborhood issues. “I would take notice of how senior citizens would struggle to make it to the Post Office to pay their monthly bills. Starting with the petition to obtain a mobile post office, I was able to secure that and assist the elderly with their postal needs. From there, I then contacted the Parks Department and multiple trash cans were much needed and installed around the community”, states Savage. His love for his people did not stop there. Savage then started his very own 501c3 where he was afforded the opportunity to work in conjunction with the Bronx’s city officials under his own, United Coalition Association. City Council Member Annabel Palma noticed Ron's work and took a liking to his strong fighting voice for the community. “She gave me funding for my organization and this helped me to further assist the youth and elderly in my neighborhood. Hosting the New York State College Fair Day had become an annual event property of his.
In 2006, Ron Savage was elected to the New York State Democrat Committee.
In 2009 he became the VP for Former NYS Assemblyman Peter M. Rivera's Community Democratic Club adding on to his political growth. With his position, Ron was provided the opportunity to speak on the floor three times at the New York State Democratic Convention where he was able to introduce resolutions to the floor.
In 2012, Ron Savage lost his seat and his 17-year relationship with the mother of his three (3) children; however, he still continued to operate his organization while taking some personal time to deal with issues from is past that somehow seemed to resurface in his present life.

In 2014, Ron Savage fell into a deep depression. For years, he had been suppressing something that would come back and haunt him mentally to an unusual extent. What was it? He had been sexually molested by Hip-Hop’s very own, DJ Afrika Bambaataa. This violation had taken a toll on Ron as an adult. Seeking help, his counselor then advised him to write down his story, thoughts, and feelings. Those journal entries would later become a future New York Times Best Seller called, IMPULSES, URGES, AND FANTASIES. Available for purchase on Amazon, Ronald gives an account of how much Hip-Hop and his molestation played pivotal parts of his developing young life and his present life. Though the book was self-published in 2014, it is now garnering worldwide media attention.
“Often times, I look back on everything that has happened to me. I wonder if this had not happened, how would my life turned out? Would I have been in a stable relationship with a woman? Would I have been able to stay in the music industry? But what has given me hope, is my truth. I have learned to embrace it and speak about it, in hopes of helping others heal from molestation as well”, states Ronald. “So much disfunction has been caused in my life because of someone’s selfish acts on a young impressionable teen. I only hope my message helps someone”. Last year, Ron also started a registered trademark brand called ULULY and it stands for Hip Hop Against Predators. To date, Savage advocating for stiffer child protective laws. During is spare time, he volunteers, and spends time with his three children.
It is Ronald’s mission to share his story to people also affected by molestation. His message is to heal, not hate. He is also focusing on his very own “Ronald Savage Survivor Network” where all survivors can network and share their stories. ###

Ron Savage will be interviewed in the Oct edition of Vice Magazine at Newstands Sept 30TH, 2016 it's the OCT edition.

Contact Information
For: Hosting Shows,
Speaking Engagements speaking about his life on being molested as a child by the founder of Hip Hop Afrika Bambaataa