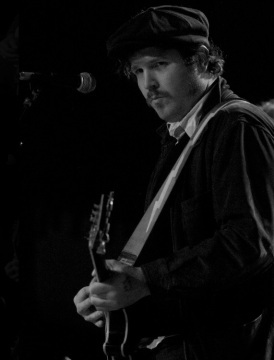 Artist and Musician Ben Dickey was born in Little Rock, Arkansas in June of 19 & Seventy-Seven. Dickey, a baby at birth, looked around at the world he entered and noticed how nice the music sounded, so he decided then and there to become a Musician.

Ben Dickey officially began his musical career playing and singing songs out of the back of a sky blue Oldsmobile station wagon with wood panel trim. His mother would drive him to various street corners and parks around the state of Arkansas to perform for many a dusty and road weary traveler.

As a teenager, Dickey was lucky to be part of a mystic and wholly righteous music and art scene in Little Rock throughout the 19 & Nineties. He performed and collaborated with many a bright and brilliant young Arkansan, some of whom he still collaborates with today. Teenage Ben Dickey sang and played guitar for the riotous and mathematically influenced rock trouncers, Shake Ray Turbine. It was his time with Shake Ray Turbine that sealed his fate as a lifer song writer, touring the U.S.A. in old vans and making friends for life with musicians, artists and most of all, The Road.

In the fall of 19 & Ninety-Seven, Dickey departed his beloved Arkansas for the City of Brotherly Love. In Philadelphia, Ben Dickey wrote songs and sang for the down-home-romping Amen Booze Rooster. He recorded a hit single for the Little Rock operated Max Recordings in the year of 20 & One. Sadly, Amen Booze Rooster would record - but never release - a full length album, it laying unheard on a shelf near other faded and nearly unremembered antiquaties.

So it was that in the fall of 20 & Fourteen, Ben Dickey, with his sweetheart and german shepherd dog, moved to Gilliam, Louisiana. They live on a cotton farm,
and he makes music a few miles up the road from where Leadbelly lived and played his 12 string guitar. In July of 20 & Sixteen, Dickey released Sexy Birds & Salt Water Classics, again with Max Recordings (Recorded every other Monday for a year with Quentin Stoltzfus of Mazarin & Light Heat).

As a solo artist in these high wild times and mighty expanses, Ben Dickey sings forth his songs - full of melody, cinematic imagery, hope and hopelessness, brightness and darkness.

Co-written, produced and directed by Hawke, the film is based on Sybil Rosen’s memoir ‘Living in the Woods in a Tree.’ It follows the life of the unsung songwriting legend of the Texas Outlaw Music movement that spawned the likes of Merle Haggard and Willie Nelson. Dickey will star as the musician, Shawkat plays Rosen and Rosen portrays her own mother.

Rosen, who co-wrote the film with Hawke, was Blaze’s real, life-long love and their passionate affair is said to form the narrative spine of the film.

The feature recently completed principal photography in Louisiana and Mississippi. It is being produced by Hawke and his wife Ryan for their Under The Influence banner, as well as Hawke’s “Born to be Blue” producer Jake Seal, and John Sloss for Cinetic Media.

“Blaze” will be Hawke’s fourth feature-length film he’s directed. His first was “Chelsea Walls” in 2001, then came “The Hottest State” and the documentary “Seymour: An Introduction.”

Ethan Hawke has started production on Blaze, directing a drama based on the life story of late C&W songwriter Blaze Foley. Pic is an adaptation of Living In The Woods In A Tree, and Hawke wrote the script with author Sybil Rosen, Foley’s life long love. Newcomer Ben Dickey plays the title character and shooting is just getting underway in Louisiana and Mississippi. Who’s Foley? He is the unsung, hard-living songwriting legend of the Texas Outlaw Music movement that spawned the likes of Merle Haggard and Willie Nelson. Foley was born in a tree house, and was killed in a friend’s living room from a gunshot wound. He wrote hit tunes that included If I Could Only Fly and Election Day.

“I’ve loved Blaze’s music for a long while and like many have been moved by the events of his life, but after reading Sybil Rosen’s beautiful memoir, this project became a priority,” said Hawke. “Now we hope to bring his heartbreaking story and musical brilliance to a much larger audience.” Much of the film is the love story between Foley and Rosen, Hawke’s writing partner on the drama.

Dickey is an accomplished songwriter and musician in his own right. Alia Shawkat plays Rosen, and Rosen plays her own mother. Charlie Sexton plays Townes Van Zant and Josh Hamilton rounds out the principal cast. Hawke, who as an actor was last seen in Magnificent Seven, has completed the Luc Besson-directed Valerian and the City of A Thousand Planets and the Brian Smyrz-directed 24 Hours to Live. He is producing Blaze with his wife, Ryan, for their Under The Influence banner, along with Jake Seal (who worked with Hawke on Born To Be Blue) and Cinetic Media’s John Sloss (who worked with Hawke on Boyhood).