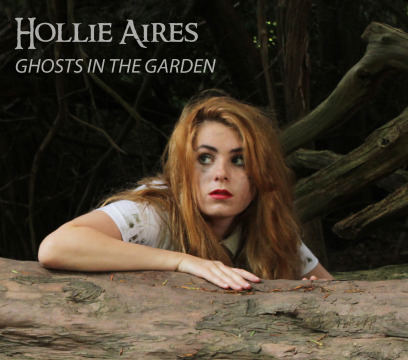 Hollie Aires (17) is the girl-next-door from a leafy suburban street in Rugby, Warwickshire. But there’s nothing ordinary or bland about this girl-with-a-guitar. She writes her own video scripts, submerges herself fully clothed in murky rivers, wrestles with a 15 foot Burmese Python called “Rita”, plays leading roles in award winning musicals – and sees “Ghosts in the Garden” .. the title of her second EP.

<< "There is also a striking resemblance to the music of Suzanne Vega and Joni Mitchell, amongst others, in this song. The haunting melody showcases her range and the accompanying lyrics point towards a mature song writing future. One line gives this review it's title whilst another gives pause for thought: "I can't lose you like I've lost myself".

If you like strong female vocalists with a penchant for hauntingly beautiful melodies and thought provoking lyrics, Ghosts in the Garden would be a great addition to your music collection." >> Huffington Post

Known in the Midlands as "Rugby's Songbird" - Hollie's pure voice and wide vocal range have brought comments comparing her to Eva Cassidy and she consistently surprises audiences with her original story-telling songs and unlikely covers. Her version of "I don't wanna miss a thing" attracted a lot of interest via Youtube.

If that wasn't enough for a 17-year-old - Hollie is also an actor and has already received critical acclaim for her lead role in the West End musical "Whistle down the Wind" - playing the demanding role of 'Swallow'. Her forthcoming leading role in Tony Award winning musical "RENT" as 'Mimi' is probably her most challenging stage role to date.

Hollie also scripted a video for her song "The Swallows" which will be released in October 2014.   As well as being fully submerged in a rather murky river, Hollie also has a 15 foot Burmese Python curling around her in some scenes.

Her own Midlands community have also recognised her talents - awarding her the "PRIDE OF RUGBY" title in 2013 as an "Outstanding Young Achiever".

Hollie continues to write and perform and is currently rehearsing for "RENT" as well as completing her second UK short tour.

An excellent review today in the Huffington Post of Hollie's new EP. Definitely worth a read.

"... her second EP, Ghosts in the Garden.  Listening to it, I'm struck by Hollie's wide vocal range, shown off perfectly in the second track, If I Should Break. There is also a striking resemblance to the music of Suzanne Vega and Joni Mitchell, amongst others, in this song. The haunting melody showcases her range and the accompanying lyrics point towards a mature song writing future. One line gives this review it's title whilst another gives pause for thought: "I can't lose you like I've lost myself".If you like strong female vocalists with a penchant for hauntingly beautiful melodies and thought provoking lyrics, Ghosts in the Garden would be a great addition to your music collection."

Hollie's opening concert in Leeds - supporting the mighty Dunwells is SOLD OUT.

"Ghosts in the Garden" track now on SoundCloud

The title track from Hollie's new EP is now available to listen in full on SoundCloud.

Hollie's 2nd EP is now out on iTunes.

Live on the BBC

Hollie will be performing live on BBC CWR at 1.30pm Sunday 17th August - talking to BBC INTRODUCING Presenter Brod Swain about her forthcoming UK Tour, new EP and her recent filming adventures in some Ancient woodland with a very large snake.

An exclusive invitation only Concert

An exclusive concert on September 21st.

Held in a secret location and for members of Hollie's Newsletter Group only. This is not a public venue - but it is an incredible space. A chance to see Hollie perform in a private concert and meet and chat with her afterwards.

Invitations will be sent out only to members of the Newsletter group. If you would like to receive Hollie's occasional newsletter - you can join here:

Hollie has an occasional newsletter with the latest information about gigs, videos - and always with pictures that aren't posted anywhere else.  Coming up will be an opportunity to attend an invite only concert - and some exclusive free offers.

You can join here: http://eepurl.com/VodFH

"If I should Break" gets some excellent reviews. Label spokesman at BHM said "we're very happy with early sales of both physical CDs and downloads. Hollie is also generating interest from streaming users too. It's a good start!"

Hollie's tour moves from London to the Midlands

Tonight - Hollie's tour arrives in the Midlands with a full band set at Straford's No1 Shakespeare street - supporting the mighty Dunwells Family band. Tickets are selling well but we will allocate some for door sales. Doors at 7pm.

Hollie will be playing live on BBC CWR on Easter Sunday during the afternoon show - 1pm - and talking about her debut CD and Tour "If I should break".

Hollie is officially played by BBC Introducing - watch our for more news about this.

Hollie's debut EP "If I should Break!" - launched

The eagerly awaited first release - out on iTunes and Amazon April 2nd - plus limited edition CD available at gigs.

Hollie Aires will be appearing alongside Kenneth J Nash and Henry Parker at Rugby's long standing acoustic music venue THE BOAT INN - Newbold on Avon - on Thursday March 6th at 9pm. An excellent line up and a night not to miss.

Hollie's first UK Tour kicks off in style at London's legendary Bedford Club on February 18th with an evening of live music and guests.  The Bedford Club is world famous for being the incubation venue for so many stars - including Ed Sheeran, KT Tunstall, The Bedingfields and many more.

The Boat, Newbold on Avon

An intimate gig and a chance to see Hollie in her home town before she heads off on tour.

New riverside venue in the heart of London

The Water Rats, London SOLD OUT

A great opportunity to catch Hollie in an intimate setting in one of London's trendiest new private members clubs for the media industries and young creatives.

The Water Rats, London SOLD OUT

supporting the Dunwells - following their successful US tour.Hollie's fans can get a discounted ticket by inboxing us on Hollie's Facebook page.

Hollie will be playing live on the afternoon show Easter Sunday and yalking about her Tour and debut EP "If I should break".

This is also the 21st anniversary party of Big Help Management.

On Sunday 18th May Rugby will gear itself up to welcome an array of vintage and modern motor-bikes, as they roar into the town centre, as part of the first ever Rugby BikeFest! The festival organised by Rugby First, in conjunction with local motorcycling groups, businesses and organisations, will take place in Market Place and High Street between 10.30am and 3pm.

The FREE family friendly festival is a great opportunity to celebrate a real variety of motorcycles from vintage to modern, British and beyond. Displays and owners will be on hand to reveal the fascinating history of the bikes and answer any questions you may have, along with a variety of bike related stalls. If you are interested in displaying your bike or having a stall please get in touch.

There will also be music, food and children's activities, including a bouncy castle, quad bikes, the unrideable bike and face painting so make sure you don't miss out! Music during the day is being provided by ‘The Vault' and will see a variety of bands perform during the day!

The Boat, Newbold on Avon

Folk on the Water Festival

It’s MORE than just another party!!!

Do you fancy meeting like-minded people under open skies for four days of off-grid entertainment and exploration, on a landscaped and wooded site?

Stage times yet to be announced.

The Wardrobe, Leeds SOLD OUT

On tour with The Dunwells

Before The Gold Rush, London

Before The Gold Rush is a fortnightly live music event in London featuring the best emerging artists within, but not strictly confined to, the genres of folk and americana.

Our larger night currently takes place on the last Friday of the month. You can expect to hear four fantastic acts, from solo artists through to full electric bands.

Our stripped-back nights on Wednesdays are a more intimate affair, mainly featuring acoustic singer-songwriters and duos. Fantastic food is served at these nights.

The return of this very popular Berkhamstead festival

On tour with The Dunwells.

The Dunwells create a unique blend of emotionally driven, anthemic rock, featuring signature four part harmonies for which they have become known. Their appeal is widespread, with influences that range from Foy Vance and Crowded House, to Fleet Foxes and Elbow. The band is looking forward to the upcoming release, and sharing new music with their growing legion of fans.

2014 is shaping up to be an exciting year for The Dunwells, with the upcoming release of their 2nd studio album. The band have been putting down new tracks with producer Stephen Harris (Kodaline, Kaiser Chiefs, Dave Matthews) since late 2013. The band is also looking forward to playing a slew of dates both in the US and the UK.

On stage at 8pm

This is a special event just for Hollie's fans, family and friends. If you have joined her Newsletter list you will receive an invitation with details of where it is being held. It is a free early evening event and Hollie will stay around afterwards to chat with people. Copies of her new EP will be available and Hollie will be happy to sign them for you.

This is her way of thanking everyone for the fantastic support she has had this year.

The location is not a public venue but it is a very special place. This will be a very memorable event. If you are not yet a member of Hollie's Newsletter group - you can join here: http://bighelp.us8.list-manage.com/subscribe?u=8033a23a03eb2672f27472328&id=daf3a46a1c

A special show at THE VAULT - part of the national celebration of Independent Record Labels and Venues - In Association with LABELLED WITH LOVE, Club Fandango and AIM.

HENRY PARKER
Probably one of the finest young guitarists in the UK today - and a songwriting ability that outstrips his 21 years. His fanbase includes Bill Wyman (Rolling Stones), Neil Murray (Whitesnake), Elliott Randall (Steely Dan), The Zombies, Sons of Cream, Mike Hurst (Dusty Springfield) .. and the list goes on. Check him out in person on this special night.

A fabulous dynamic combination of Patrick's guitar and Maddie's rich vocal - with something a little extra that makes you want more.

One of Rugby's bright new hopes

You all know him - now come and check out his tunes

Sadly - Sharon has had to cancel this concert because of a family emergency. Our thoughts are with her and her family right now.

The concert has been rescheduled for April 29th - with Hollie remaining as support.

Supporting Ireland's legendary Sharon Shannon. This event will sell out.

The career of accordionist/fiddler Sharon Shannon, which began with the internationally acclaimed Irish folk/rock group the Waterboys in 1988, has blazed a fearlessly eclectic path beginning in traditional music but emerging somewhere entirely new. While never losing sight of her roots in Irish folk music, she has undertaken a musical journey which includes collaborations with Bono and Adam Clayton, classical violinist Nigel Kennedy, reggae legend Denis Bovell, the Kodo drummers of Japan as well as Steve Earle, Jackson Browne, Emmy-Lou Harris and Alison Krauss. Her cross-global collaborations have lead to successful concerts the world over, including performances in the UK, Europe, Japan, Australia, the United States, Canada, and Africa.

Hollie will be performing at two of the shows - afternoon and early evening.