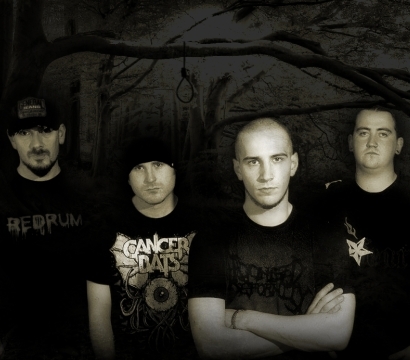 With their new EP "Era of Corruption", BloodThread have reached a creative
milestone that few bands get to in any style of music, let alone in the extremes of Death Metal. Hard to pigeon hole in to any sub-genre, the songs have a bit of something for everyone who loves their music properly heavy. Elements of Progressive, Brutal and Technical Death Metal can be found all the way through the EP; in many instances all in the same song, yet without making it sound disjointed or disturbing the flow of the music.

Everyone in BloodThread share a common vision, to do something different, to not just sound like another typical "genre addition". A diverse range of influences from each member of the band all fuse together to create a unique style that is more than the sum of its parts. Songs that span from not much over the two minute mark up to nearly seven minute epics, you can find something to scratch whatever musical itch you have - unless that itch happens to be Free Jazz...

It has taken a long time and a lot of hard work; rehearsing and gigging relentlessly, playing up and down the length of the country, supporting such genre heavyweights as Cattle Decapitation and Vital Remains as well as touring Ireland (in the lead up to an esteemed slot playing the infamous "Siege of Limerick"). BloodThread have been building up to this release over several years.

Formed in 2012, BloodThread soon started making a name for themselves with live shows that would dominate the Glasgow metal scene, leading to support slots with the likes of Kylesa, P.A.I.N and Insision.

Releasing their debut EP "The Tolerance is Over" during this period to considerable acclaim, BloodThread then went through a painful and considerable change in line-up as members had to leave due to personal commitments. Following this there was almost a year before the band would then start gigging again. Founding member and guitarist Peter Wall was now joined by Tony Mitchell on vocal and guitar duties, Dikie easily filling what many had believed to be an extremely hard-to-follow spot behind the drumkit and Chris Mancini providing some low-end rumbling noises (and hints of melody) on the bass guitar, this was the iteration of BloodThread that would go on to define the band and their sound.

As BloodThread got back in to the writing habit with their new members, it quickly became apparent that the material now being written by the band was something special. Taking time with the music, never putting riffs together just for the sake of it and always making sure that the song itself was the priority; this care and attention to the music culminated with several sessions in the studio at the end of 2016 and beginning of 2017 tracking the songs found on "Era of Corruption". These would be the blueprints for the latest material that the band have been writing and showcasing in their more recent live shows.

2017 has already proved to be a massive year for BloodThread. Supporting Ghoul, Damim and the release of the eagerly awaited "Era of Corruption" in May, as well as playing Slaughterpit alongside Warlord (UK) and Gehtika. It would be hard for most bands to keep up the kind of momentum that BloodThread have been achieving, however BloodThread are definitely not "most bands"...

We are proud to announce that we will be releasing our new ep 'Era of Corruption' on Friday the 5th of May.

To celebrate the release we will playing back-to-back launch shows in The Venue in Dumfries on Friday the 5th and Ivory Black's in Glasgow on Saturday the 6th of May.

We will be joined on both dates by bands that we are both friends with, and fans of; with Dog Tired and Burning The Dream playing both shows, Seek Solace In Ruin in Dumfries and Satiracy in Glasgow.

Our new EP will be titled 'Era of Corruption', with a release scheduled for the beginning of May. The track listing is as follows:
1- Extractor of Innocence
2- ....for I Am the Butcher
3- Castrating Those to Which You Bleed
4- The Tormentor

As with its predecessor this EP has been recorded, mixed and mastered by Michael Allan with some additional tracking done at Transmission Room by Steve Reilly. For the very first time a BloodThread track will feature guest vocals, which are from none other than Mr. Paul Kelly; vocalist from our good friends and recent media darlings Burning The Dream. He kindly lent us his vocal talents on the track 'Castrating Those to Which You Bleed'.

We will be unveiling the artwork in the coming weeks and we will also be releasing a track before the EP is released.
We have put a lot of work into this project and are extremely proud of how it's turned out. We genuinely can't wait for you guys to hear it!
Head on over to Slow Dragon Music for more info.

In October this year we will be heading to Ireland on our first ever tour dubbed 'The Tormentour'.

Starting in Dublin, taking in Galway, Belfast and ending at the reknowned Siege of Limerick festival, we cannot wait to take our music to a completely new audience and share the stage with some of the finest bands Ireland has to offer.

2015 was a great year for us. What initially started out as trial by fire with the new lineup, the year went from strength to strength. We participated in the Metal to The Masses final, supported death metal legends Vital Remains as well as sharing the stage with touring acts such as Ramming Speed, Thurisaz, Amputated among others and ended the year headlining our own Xmas bash in Dumfries.

Which sets us up nicely for 2016, which is shaping up to be a very busy year for us. We have a couple of local headline shows coming up before we go into the studio to record a new ep. We have 4 tracks ready to go and we can't wait for people to hear them. We will be supporting Cattle Decapitation in June which is a huge deal for us. We will also be playing Hordes of Belial 7 in Dundee at the start of October as well as having confirmed our first show outside the UK at Siege of Limerick in Ireland on October 30th, which will hopefully be the final date of an Irish tour.

We are proud to announce our first endorsement deal with Scottish effects pedal company Sine Effect.

We have enjoyed an excellent relationship with Sine Effect right from the inception of the company and both our guitarists Tony and Peter and bassist Chris use a variety of Sine Effect pedals.

These pedals have became a vital part of our setup. All the pedals are handmade in Glasgow and feature all original circuitry and we are looking forward to seeing and trying out some of the other pedals that are in development, many of which will no doubt find their way into our pedalboards.