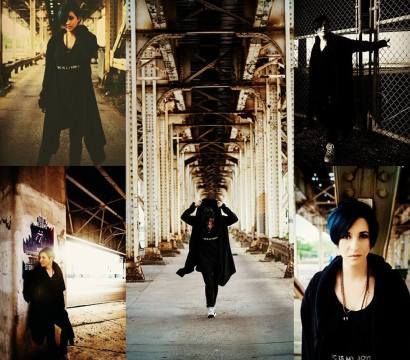 Chicago born and raised dj/producer within the ranks of the underground house/techno scene.

Art and music always being a priority and focus, she learned to play the violin at age 7. Fusing the sound of an electric violin in her production, makes her production hauntingly beautiful and melodic. Learning the violin and music at a young age, fostered her to compose music and leaving room for interest to learn piano as well as percussion. Percussion instruments and string elements are very prevalent in her productions with rolling drum sounds and changes to the added beauty of strings.
Blu has tracks on various labels:
Risky Business Records, Opium Recordings, MTZ Records, Vested, Flashmob Records, AfterDark Recordings, Bottomless, Invaded, Orange Earth Recordings, Krunch Audio, Phunk Junk Recordings, Tru Musica, Craft Underground and Bassment Tapes.
Blu 9 has recently become a Model 1 ambassador, holding the only Model 1 mixer in the Chicago area. With this in mind, exposing various Chicago artists to the mixer has been not only challenging, but rewarding.
Playing across the city of Chicago, in familiar places such as Primary, Spybar, Estate, Exit, Celeste, The Mid and Soundbar to various underground events and festivals, such as Mamby and Spring Awakening Music Festival. She is no stranger to playing in various places in New York, Milwaukee, Miami and Detroit. First time playing in Miami was for the Art Basel festival. She has been on support for Nicole Moudaber, Stacey Pullen, Ken Iishi, Chris Liebing, Function, Loco Dice, Juliet Fox, Oliver Huntemann, Sydney Blu, Coyu, Agent Orange, Richie Santana, Gene Farris, The Saunderson Brothers, CocoDrills, Dennis Cruz, Supernova, and Richie Hawtin.
In 2016, she held a year long residency at Rivers Casino-Lotus Lounge and is a resident at Primary Night Club in Chicago. Also, helped run the Live Labs at Twist and Fader, which brings in local djs and beyond to showcase their talents on a live stream while their set is recorded.
“I am always very appreciative and honored to play anywhere and love the vibe that everyone brings. I am grateful for everyone I meet from other artists to supporters, since you don’t know when you will cross paths again.”Catch her interviews for a more in depth look:

Creativity and Memories-Interview with Blu 9

Please contact me through email!
Thank you!
Information Request