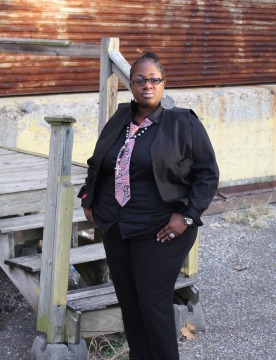 Butta MD is a refreshing presence in the world of spoken word & rap, "where Scripture meets Hip Hop".

Rhyming since she was 12 years old, Margaret Deloach, is a native Memphian professionally known as, Butta MD. Due to a gospel, piano, and freestyle foundation, Butta MD grew into a female lyricist, who was determined to shine in the midst of her and others, struggles and triumphs. Over the years in developing her craft, Butta MD entered talent shows, open mics, and freestyle battles in school, churches, and around the neighborhood.

Yes, music was Butta MD's dream although graduating from college, became her reality. In May 2010, she received her Bachelors Degree in Music Business, Cum Laude. A year out of college Butta MD wrote and performed more, and soon linked up with singer, Angelica, p.k.a.. Ebony Angel, who added a soulful feel to her hooks. Months later, she featured, New Jersey native, Arkenny, p.k.a. DJ Ken Skratch, at a St. Jude, Sickle cell Fundraiser event, and he successfully brought the true MC, out of Butta MD. Amber Wilson, a music collegue of Butta MD, completes the mix, with her silky vocal flavor. Butta MD & A3. They have performed at schools, churches, annual festivals, fundraising events, parties, and more. They have brought a new style of Soulful Hip hop, in mixing Butta MD's postivie, uplifting stories, w/ soulful vocals, and old school scratching.

Butta MD has encourage her fans/supporters with a song she wrote dedicated to her mother who was battling cancer, "Brighter Day". Now, even though, that song has uplifted so many hearts and spirits, she recently digitally released her single, "Warrior" (We Made It), from her debut EP, entitled, "Da Nu Norm; We Made It" June 2014.

She dedicates this album to her late mother, who passed August 2013, to Breast Cancer. "Da Nu Norm, EP includes a collection of six heart compelling songs, she wrote while her mother was battling cancer and you can hear the pain, stories, and triumphs, throughout every song. Butta MD's mission is to change the face of hip hop music, by healing, helping, and coming from the heart, in everything she does.

With genuine, soulful, and uplifting tunes, she continues to encourage and inspire through performing, writing, speaking, and singing. Now as she is propelled up to her next level, she's determined to pass down to the next generation; her music but most importantly the awareness that "anything is possible, if you only believe, keep God first, and KEEP GOING!"

All I Know is I Survived Campaign

Help Butta MD raise funds for a cancer patient and their family, in honor of ALL the Survivors, this October. March 2014, Butta MD created her 1st t-shirt campaign, dedicated to her late mother, Gloria Deloach, who passed away from breast cancer, August 20th, 2014. "We Are Warriors", successfully raised over $400, from which a portion went to the WINGS Cancer Foundation.
Now in honor of ALL THE survivors, this October 2014, Butta MD is launching a new "All I know is... I Survived Campaign", where a hand selected family/patient, that has/is being affected by cancer, will be blessed with a portion of the funds, donated from the t-shirt sales.

-Gildan Ultra Cotton Long Sleeve
-T-shirtSizes: YS - XXXXXL
Also, to make this campaign even better, THE FIRST 10 PEOPLE WHO PLACE A ORDER, WILL RECEIVE A FREE PHYSICAL COPY OF DEBUT EP, "Da NU Norm, We Made It."

Butta MD recently released her debut EP, entitled, "Da NU Norm-We Made It", which she dedicates to her late mother, Gloria Deloach.  It includes songs such as, "Warrior", "I Survived", "Late Night Prayer", and more. She even included her bonus track, "Brighter Day".

"Melodies from my Brush" Darlene Newman's Art Show ... @GPAC (Germantown Performing Arts Center, Memphis Tn. 1801 Exeter Rd. @6pm-8pm. ButtaMD will be performing and DJ L.E.N. will be on the 1s & 2s! By the way, they will also be hanging on the wall in ink form. See them painted! See them live!FREE..OPEN TO PUBLICCLICK HERE for more

Riverview Kansas Community Development Corporation. 1891 Kansas St. 11am-4pm. This year we will hold our First Annual October Fest and you are cordially invited to attend our festival. . We will have community vendors, games, and entertainment for the the entire family

We Do Memphis Concert

One table for artist merchandise

One for DJ
One for Background vocalist

One wireless microphone:
One for emecee (lead vocalist)

One monitor toward the DJ