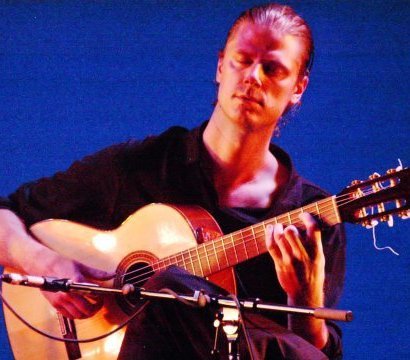 A resident of Madrid, Spain, Calvin Hazen has been a professional guitarist for over 20 years. He has performed at some of the most prestigious theatres in the U.S. as well as internationally including RADIO CITY MUSIC HALL and LINCOLN CENTER in New York City, TEATRO NACIONAL in Mexico City and TEATRO MADRID in Spain where his performances have enjoyed enthusiastic critical acclaim. Television appearances include THE TONIGHT SHOW WITH JAY LENO, GOOD MORNING AMERICA and THE REGIS AND KATHY LEE SHOW. After his initiation as a professional musician touring and recording with guitarist OTTMAR LIEBERT, Calvin has since worked as musical director and composer for numerous companies including Suite Espanola, Carlota Santana Flamenco Vivo and Maria Benitez Teatro Flamenco. He is a regular performer and instructor for Festival Flamenco, Albuquerque. Recording credits include “The Hours Between Night and Day” with OTTMAR LIEBERT, “El Pintor”, in Madrid, Spain and “Ni Mucho Ni Poco” in Santa Fe, N.M for both of which Calvin worked as composer and co-producer. Currently, Calvin is in Albuquerque as an invited guest artist in the Dance Department at the University of New Mexico.

•The following are some select quotes from publications regarding productions in which I have collaborated as guitarist and musical director:

“…by that point in the evening, one was apt to credit the hand of God for the miracle of perfect accompaniment that manifested onstage…layered over the drumming, hand-clapping, strumming and searing caterwauling, each pause just as empty and silent as the rhythms were full.”-WASHINGTON POST Sarah Kaufman March 8, 2007