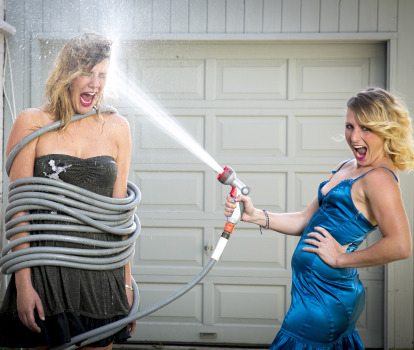 Kaitlin Loftus and Laura Danowski have been corrupting audiences for the past 6 years with their over the top, outarageous, and energetic comedy! Described as being a "party onstage" CHEAPSMOKES never fails to shock the crowd with their fearless act. In a show where no audience member is safe, you'll never know what to expect.

In the past few years, this Toronto based duo has been picking up speed showcasing for Just For Laughs, finalsts in Sketch comageddon, performing in Montreal and Toronto sketch festivals and doing a cross Canada comedy tour.

You can see them on MTV Canada's "Losing it" and "30 secondes GO", discovery channel's "Prank Science" or hear them on Sirius XM radio

Since moving to LA four months ago, in that short time they have already performed at UCB, The Comedy Store, Flappers and headlined at the Ice House

Also, releasing brand new videos on youtube every Tuesday, you can look forward to their ballsy comedy for the world to see. Including recently having a video go viral called "2 drunk girls discuss gay marriage"...very high brow humor ;)

CHEAPSMOKES is something you have to see for yourself. They are not like any duo you've ever seen before. They're best friends like Bert n' Ernie! Except they're not puppets...and they're not boys...and not really like them at all...but you've got to see them!

Cheap Smokes: – This Toronto sketch duo has performed everywhere from the Toronto Sketch Festival to Just For Laughs Showcases, been SketchCom-Ageddon Finalists, as well as toured their comedy alongside LadyStache in their “She’s Got Shape Tour.” With their absurd characters and physicality, they had us obnoxiously laughing at their “Garbage Man” sketch during their headlining Showcase at the Riv. With members Kaitlin Loftus (Humber Comedy Program, The Sketchersons) and Laura Danowski (Humber Comedy Program), or rather The Short Blonde (Kaitlin) & Tall Brunette (Laura), the ladies are excited to perform at one of the best comedy stages in Toronto. See their latest video “How Girls Get Ready for a Night Out…alone.” or their ripping mock of Victoria’s Secret potential new fad in “Victoria’s Secret Commercial”

Cheap Smokes (Kailtlin Loftus and Laura Danowski) have lit a wildfire amongst the Canadian comedy scene. Not only do they have the craziest energy we have ever seen on stage, but they also can drink us all under the table.

They’ve corrupted audiences all over, including a showcase for Just For Laughs, being a finalists in Sketch Comm-ageddon and most recently performing across Ontario, in the She’s Got Shape Tour. When these girls guest host, not only will your minds be blown…but your hearts will be too.

"People have described it as being a party on stage," said Ms. Loftus, describing her routine. "We try to get the audience involved and we really like to be silly and have fun. The whole tour is just showing that girls are just as funny as boys. Our comedy goes out to any audience. Whatever is funny is funny."

Danowski and Loftus make up the comedy sketch troupe Cheap Smokes, and have quickly moved from performing in small bars to being in the Just For Laughs showcase and the Toronto Sketch Fest, and opening for Canada’s The Impondrables, who won the Canadian Comedy Award for Best Sketch Troupe.

Cheap Smokes
Lucky for me, the next act to take the stage was Cheap Smokes. Their first sketch involved a member of the audience, who was forced to play the role of a fictional third member of Cheap Smokes in a sketch set in a hotel room. The ladies then stuck him in a ridiculous situation where he’s banging one of them, then gets discovered by his wife. They played off of him really well, I fucking loved it. The rest of their show didn’t involve the audience as much, but who needs that? Their sketch about accents resonated with me (I can’t keep an accent up for more than 20 seconds either), and I dug the bit about their passed out friend. The sketch that really stood out for me as the highlight of their set (and of this whole show) was Dirty Pop. It’s a silly premise for a sketch, it’s a ridiculous pun, but throwing dirt into a can of Coke and then rocking out to an *NSYNC song totally won me over. I’m really happy these girls turned out to be hilarious, because I’m seeing them again next weekend, as should you! Cheap Smokes are joining up with Ladystache (whom we raved about a few days ago) for the “She’s got a shape tour”, which hits Montreal on November 18th and 19th. We’ll be giving away tickets to the Saturday show on our Facebook page, so keep your eyes peeled!

This coming weekend will be shared with lots of love, music, and comedy.