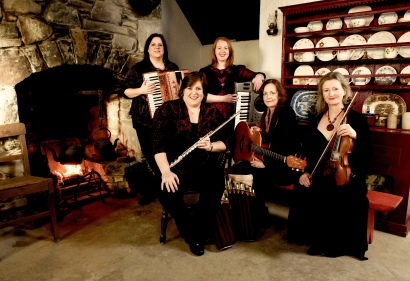 “It is simply impossible to imagine an audience that wouldn’t enjoy what they do,” says the Boston Globe speaking of Cherish the Ladies, the Grammy-nominated, Irish-American super group that formed in New York City in 1985 to celebrate the rise of extraordinary women in what had been a male-dominated Irish music scene. Since their first sold-out concert, they have exploded onto the Irish music circuit performing thousands of concerts around the globe and are now among the busiest and most admired Irish groups on the planet. 2020 celebrates the incredible milestone of 35 years of touring in the finest venues around the world including the White House and the Olympics and along the way recording a staggering 17 critically acclaimed albums.

Their show is a wonderful blend of the old and the new. Irish songs, lively jigs and reels and heart-wrenching slow airs transport the listener on an enchanted musical journey. Cherish the Ladies make centuries-old music their own with music that has been passed down from generation to generation enhancing it with tasteful new arrangements and talented renditions.

Under the leadership of front woman and raconteur, All-Ireland flute and whistle champion Joanie Madden, named one of the Top 25 most influential Irish Americans of the past quarter century, these ladies create an evening that includes a spectacular blend of virtuoso instrumental talents, beautiful vocals, captivating arrangements and stunning step dancing.

The New York Times calls their music “passionate, tender, and rambunctious,” and the Washington Post praises their “astonishing array of virtuosity.” They’ve won recognition as the BBC’s Best Musical Group of the Year and named Top North American Celtic Group by both America’s National Public Radio and the Irish Music Awards, not to mention having a street named after them in the Bronx!

They’ve shared the stage with such legendary musicians as The Clancy Brothers and Tommy Makem, The Chieftains, Vince Gill, Nanci Griffith, Pete Seeger, Don Henley, Arlo Guthrie, Maura O’Connell, Mary Black and even collaborated on the The Boston Pops Symphony orchestras recording, “The Celtic Album” which was nominated for a Grammy. They’re in constant demand in the symphony world and have become the most popular Celtic Pops act in history with over 300 performances as the featured soloists with symphony orchestras.

Cherish the Ladies level of artistic, historic, and purely enticing entertainment is unlike any in its genre. As their reputation and admiration from both fans and critics alike continues to grow, Cherish the Ladies blazes forward into another decade of music making.

WHAT THE CRITICS ARE SAYING ABOUT CHERISH THE LADIES....

"Cherish the Ladies has been a leading group in the Irish traditional world...it is simply impossible to imagine an audience that wouldn't enjoy what they do." Richard Dyer, The Boston Globe

"Expands the annals of Irish music in America...the music is passionate, tender and rambunctious." Jon Pareles, The New York Times

"Superbly led by the larger than life Joanie Madden on whistles, flute, harmony vocals and introductions, these ladies dusted the perceived cobwebs off traditional music by presenting it in a new light, with a mixture of first class 'kick-ass' playing, sensational singing, dynamic dancing and infectious humour, that packaged it and sent it into the modern world - without ever losing respect for the musical roots." This homely approach, with great stage banter, ensured not only an entertaining night but also that never before has 'trad' been so enjoyable. The Belfast Telegraph, UK

"Cherish the Ladies is one of the foremost Irish traditional music groups in the world." Billy Altman, The New York Daily News" "The Ladies are first generation Irish-American with pride in their roots, a terrific sense of fun and heaps of music in their fingers and toes. Cherish the Ladies is their name and cherish them this enthusiastic Glasgow audience did." Rob Adams, The Glasgow Herald (Scotland)

"For Cherish the Ladies, named after a popular Irish traditional jig, the jig is not up. Madden's tenacious but tactful helming of the ensemble should be studied in business schools. It should also be scrutinized in music schools. For 25 years and counting, Cherish the Ladies have shown that Irish traditional music from America remains a vibrant, diasporic marvel. Country Crossroads: The Nashville Sessions" provides unimpeachable proof and will definitely appear in my top ten list of albums for 2011." Earle Hitchner, The Irish Echo

"They are now among the busiest, best, and most popular Irish music groups in the world." Scott Alarik, Boston Globe

"Cherish the Ladies from the USA, made their connection from the first note, skillfully managing the cheers and tears for every second of a torrential two-hour set. The band brilliantly strutted that very Irish-American sound which simultaneously exudes a tremendous joie de vivre and deep nostalgia." Fintan Vallely, The Irish Times (Dublin)

"They have converged and risen like a great wave to engulf the hearts of audiences from Brooklyn to Belfast and from Boston to Brittany. They are currently in top form, touring the world as a mighty example of the richness of America's Irish music traditions." Steve Winick, Dirty Linen Magazine

"While the standard has been remarkably high throughout the festival, few concerts could hope to provide as much satisfaction as this one. Cherish the Ladies received a standing ovation, both for their music and ebullient good humor, and were a hard act to follow." Kenny Mathieson, The Scotsman (Scotland)

"...Only recently have Irish-American women challenged the male-dominated traditional music scene, and proven themselves capable of as much poetry, exuberance, and soul as the tradition requires. An outstanding ensemble..." Leslie Berman, The Village Voice

"The two-and-a-half hour concert was one of the finest traditional performances I've ever attended and "the Ladies" are the musical equals (some would say betters) of the Chieftains...Cherish the Ladies provided a stellar evening." Marybeth Phillips, Irish Edition (Philadelphia)

"... What made this ensemble even more fascinating was the fact that they are America's first all-female group in was has always been a male dominated field...Among the highlights: bubbling good humor, infectious enthusiasm and the exuberant step dancing." Don Heckman, Los Angeles Times