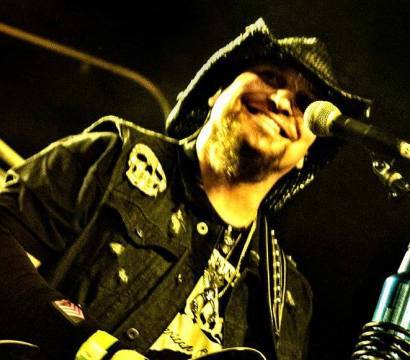 Chris’ love of music started at a very young age in northern California. Son of a big band crooner, he spent his early years listening to big band classics with his father, and 50’s rock with his mother. At the age of 8, he began learning drums in school, then transitioned to trumpet 2 years later when the saxophone was not available. Around the same time, Chris sang in the church choir, with help at home from his older sister learning vocal harmonies and technique as she was already an accomplished vocalist in town.

Once in high school, a football injury prevented him from playing that season and was then introduced to bass guitar when a friends cover band had a show coming up and needed a bassist. The high school music director allowed him to use school equipment to learn to play on his own. Once in the band, playing shows, a whole new world opened up for him that he loved. Chris started to attend concerts like Bon Jovi, Metallica, Megadeth, Judas Priest, and Kiss. He knew this is what he wanted to do for the rest of his life. He went on to be involved in several other original and cover bands honing his craft in California and Arizona. The bands ranged from metal to country.

His upbringing shaped a wide range of influences of musical greats from Elvis and Frank Sinatra to rock legends like Van Halen, Led Zeppelin, Black Sabbath, and Iron Maiden. These influences fueled his style and passion for performing and writing music. Chris believes that he will never be done learning and expanding his craft and continues to love the journey.

When Chris isn’t busy with Failure by Proxy, he volunteers his time as a Bass Instructor at Vet-Traxx Project, a non-profit organization to help provide music therapy to disabled veterans suffering from PTSD.

When asked “Why Schecter Guitar Research”?

“The quality and feel of a Schecter is superior! Great people & great bass guitars that I can trust on stage night after night."

This is the launch party fundraiser for the annual Vet-Traxx Festival in September.