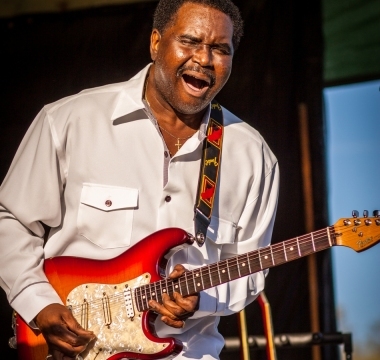 Chris Beard is a modern blues guitarist and singer like no other. His personal connections to the blues were forged with the living blues men he sat with since childhood.

Born in 1957, Beard is the son of blues guitarist, Joe Beard, who grew up on Beale Street in the 1950s. When family friends like Matt “Guitar” Murphy and Buddy Guy stopped by to visit, young Beard became their willing pupil. Chris says, “when your father grew up on Beale Street and music was in your DNA, then blues is who you are and what you do.”

“Blues is my roots,” continues Chris, “as Joe Beards son, I grew up around some of the best bluesmen. The influence of Buddy has been major for me. All he had to say to me was, 'keep on doing what you’re doing' and Matt always told me, 'the guitar has to become an extension of you', that will always stick with me.”

After years playing the clubs in and around Rochester, NY, Chris was offered the opportunity to record. In 1998, he released his debut recording, Barwalkin, on JSP Records. That record earned Beard a W.C. Handy nomination as the Best New Blues Artist. Chris produced his follow-up disc, Born To Play the Blues in 2001 to the critical acclaim of the blues press and earned Beard the title, 'Prince of the Blues'. In 2005, Beard released Live Wire, a stirring combination of live and studio performances for Northern Blues. Beards next recording, Who Am I And What I Do, depicts his live story of growing up in a house full of blues and sings of his family commitment to keeping the blues alive.

Five years later Beard formed his own label, Destin Records, and released, Eye of the Witch, with ear catching lines and true-life stories that accurately capture the complications of modern male vulnerabilities and strengths. Presently, Beard is working in the studio on his sixth record to be released in Winter/Spring 2023

Update Required To play the media you will need to either update your browser to a recent version or update your Flash plugin.
Download Download
Back
You Tube
Contact Information
Booking email info@chrisbeardmusic.com
Management /Advisor
Paul Benjamin
Email- Benjaminproductions1953@gmail.com
Ph 207-691-0825-