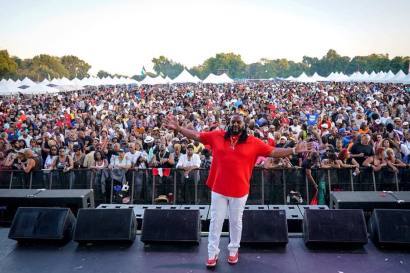 In a scene dominated by DJs and producers, it is hard to believe that the most definitive moment in the birth of house music came not from beats, chords or vocals, but a sermon. The House Music Gospel or The Preacher's Anthem are just a few of the descriptions anyone with even a passing interest in the genre will no doubt have heard in the impassioned intonation of “In The Beginning There was Jack, and Jack had a groove”, the opening line of Chuck Roberts’ soul stirring speech, a performance that was first heard in Rhythm Controll’s seminal 1987 track ‘My House’. Later resampled by Larry Heard, AKA Mr Fingers for ‘Can You Feel It’, often cited as the first deep house record ever released. As well as sampled on well over 120 various recordings.

How it all started:
When: The year 1987
Who: "Jack" aka Chuck
Where: A heavenly studio on the West side of Chicago
What: Chuck explained to his people spoken in a godly voice straight from the House Book of Genesis in omniscient detail of how house music was born and the impact on it has on your body and soul which was cemented on wax in the recording “My House”. Then Jack disappeared back into the heavens only to be heard all over the world but never seen. For you see in Jack's realm there is no time.

Since then House Heads had anticipated his return for decades as they were eager to come into the presence of more knowledge and wisdom of Jack's House. Little did the world know that an impromptu performance at the 2017 Chosen Few Dj’s House Music Festival in Chicago would serve as a catalyst to reenergize the already timeless acapella.

The viral success of that performance launched “In The Beginning There Was Jack” which was released on Ultra Music in 2018. Produced by Terry Hunter and also featuring great Monique Bingham. Once again Chuck Roberts ability to rouse emotion through his rapturous delivery, a marked contrast with the glitzy diva vocals that came to define the disco sound of decades previous. The sermon itself is an ode to unity, oneness and inclusivity within house music, declaring that “no one man owns house because house music is a universal language, spoken and understood by all”.

Since his rebirth in 2017 Roberts has graced the stages of festivals and clubs around the world, delivering his spine-tingling sermon as a reminder to dancers, many of whom weren’t yet alive in 1987, that as well as fulfilling hedonistic pursuits, house music has always served a higher purpose of uniting people from all races, genders, sexualities and walks of life.

Here are just a few of what the media articles and music industry Tastemakers have to say about the most prolific and iconic messages in dance music:

Grammy Nominated DJ Terry Hunter states : My House speaks directly to the people. It's obvious as it has lasted 30 years and DJ's of all genre's still have him in their rotation.

And the list goes on...In August 2016 Spotify Warner Music Group named this recording#1 out of 50 Greatest House Music Recordings of all time

In 2014 Rolling Stone Magazine named Can You Feel It Featuring Chuck Roberts now famous speech #6 of the 20 greatest house records of all time.

In July 2016 the U.K.'s BBC Music calls the speech one of the most spiritual experiences in dance music

What’s happened between all those years you may ask?

Well, The Chicago Native had been active in music for many years prior which started as a youth singing in the Church Choirs and going on to form his own R&B Bands “Mister” and “The Verdict” appearing on NUANCE Records penning such classics as That's Where I Come In and I Wanna Thank You in the 1980’s.
After the success of My House he enjoyed a brief stint on ZYX Records in the U.K. However, he continued to concentrate his efforts on R&B music production producing music over the years contributing to projects on Death Row Records for Danny Boy (the voice behind 2Pac's "I Ain't Mad at Cha"). Additionally Chuck has also worked with Sony Music producing for Glenn Jones, Bobby Debarge and many others. Chuck has also continued to work with various Gospel Groups writing and producing and operating his own recording studio.

Since signing to Ultra Records in 2018 Chuck has had numerous recordings to be released some of which include:

“I Choose To Live”-Ultra Records