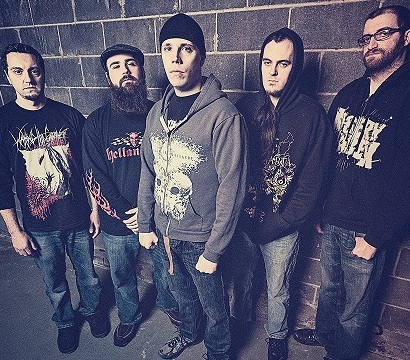 Thank you to everyone who has worked with us and helped us keep this New Jersey Death Metal freight train rolling. We now proudly partner with CLAWHAMMER PR and SLAM WORLDWIDE! Keep your brain peeled for more

A quick view down the scope:

OFFICIAL Cognitive merch can be purchased through us here:

LABELS AND UPPER BRASS CAN ACCESS OUR MATERIAL HERE:

Cognitive was born in 2011 with the sole intent to create heavy, intensely technical music, while maintaining an edge of creativity that separates them from the over produced sea of sub genres. Hailing from South Jersey, combining technicality, guitar solos, grooves, and abstract ideas with song writing, Cognitive is continually pushing itself to think outside of the box while maintaining a sheer brutal edge. In December 2013, Cognitive found a home on the Spanish label Pathologically Explicit Records, giving them a broader reach with their material. With numerous weekend warrior tours under its belt, 3 seperate full week tours with the likes of Devourment ,Psyopus, Gorod, Wormed, Infernal Revulsion, and Condemned, having traveled to numerous states, and sharing the stage with bands such as Between the Buried and Me,Cattle Decapitation, Suffocation, Gorod, Wormed, Infernal Revulsion, Devourment, Suffocation,Broken Hope, Wretched, Misery Index, Origin and tons more. With their 2012 debut EP “The Horrid Swarm”, Cognitive erupted onto the scene full force. With their new self-titled album released to worldwide acclaim, extremely high ratings, featuring artwork by Tony Koehl (Black Dahlia Murder,Job For a Cowboy, Malignancy, Waking the Cadaver), Cognitive seeks only to advance itself musically and export New Jersey’s undying hatred globally.”

Your Persona, Cognitive and more!

20:00 $5 Corpse Hoarder, Cognitive, Disgorgement, Crackhouse, Hellrad, One With Nothing

@ The 5th Quarter Lounge, Indianapolis, IN