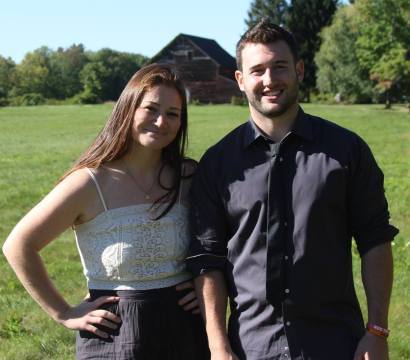 Following a six month venture as part of an acoustic pop act on Celebrity Cruises, Ry McDonald has teamed up with vocalist Maggie Quealy to create Copilot, an Americana Pop duo based in Norfolk, Massachusetts. Previously, Ry had been the frontman for Suncooked, a regionally successful Folk/Americana band who shared the stage with acts such as The Dropkick Murphys, The Mighty Mighty Bosstones, Skinny Lister, Greensky Bluegrass and several others. As Copilot, Ry McDonald and Maggie Quealy explore their passion for unique, Americana music and exhibit it through their popular covers and original songs in a way that many listeners haven't quite heard before.

When asked about their career and musical goals, Ry and Maggie will immediately expose their humble personalities, and continually express their deep appreciation for audiences and individuals who have made their music possible. For this duo, it’s about giving back and putting music back into the hearts of the audience members. In fact, they’ve actually thanked attentive passers by on the streets of Boston by paying them each one dollar from the tip jar as part of their “Music Over Money Campaign”. Copilot’s music is selfless, and the audience is always at the heart of every single show.

Currently, Copilot is working on their first EP, named Downbeat, which features all original songs written by McDonald & Quealy, scheduled to be released later this year. The duo is also performing regularly throughout the region of New England and promoting their new, but steadily growing project.

We have put in our whole hearts into this. This album means so much to us. Jake Gregg is part of this album & everything we have done for this has all been for him. All donations for the next 24 hours will get donated to his scholarship fund at Lyndon State College that goes towards a Music Business & Industry student.
So ladies & gents, here it is. In loving memory of Jake Gregg.
Downbeat.

We would love to annouce that on 12.12.15 we will release our debut album "Downbeat."
An album made in loving memory of Jake Gregg, and how he inspired everyone around him.

Copilot adventured into downtown Boston looking to giveback to the people for their generosity and bring everyone together all for the love of playing and listening to music! They played their music to the public, but then insisted that the people listening to take a dollar because it was a message that stated, "it isn't about the money, its about the music."

The Once Ballroom @ Cuisine En Locale

Out Of The Blue Art Gallery

Ticket Prices: $10 at the door