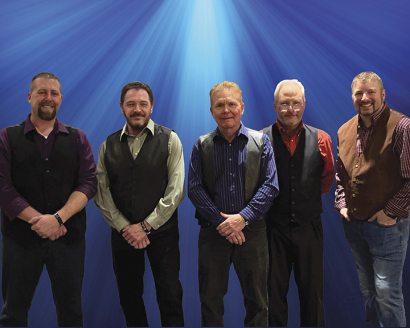 2005 is when the idea of The Country Gentlemen Tribute Band was first born, when Bill Yates, 20+ year member of the Country Gentlemen, Darren Beachley and David Propst met at Cabin Fever Picking Party in Hampton, VA and sang some old and new Country Gentlemen songs. Later, after further deliberation, they decided to go through in creating a project in tribute to the Country Gentlemen. After a search produced the addition of 4 more members, in August of 2005 the “Bill Yates and Friends: A Tribute to the Country Gentlemen” project was initially started and later was completed and released in December 2006 on the MasterShield Records label located out of Bridgewater, VA. It became an instant hit with fans, friends and fellow musicians alike, so much so that the band started touring. Bill Yates toured with and fronted the band for 9 years until he did tragically pass away the night of Monday, January 26, 2015, from complications due to cancer. He leaves behind a historic legacy of music, having the honor of previously performing with many bluegrass greats down through the years, such as Red Allen, Bill Monroe, Jimmy Martin, but most importantly the Country Gentlemen.

The current lineup that will be continuing to perform on stage will include: Mike Phipps on guitar and "Charlie Waller" sound-alike vocals, David Propst on mandolin and vocals, Lynwood Lunsford on banjo and vocals, Eric Troutmanon upright bass and vocals and Geoff Gay on dobro and vocals. This ensemble vows to continue to put its heart and soul into each performance, trying to help satisfy that musical hunger for the multitude of Country Gentlemen fans that still fill this country; especially the ones that truly do miss Charlie Waller & Bill Yates. We will continue to move forward and perform in tribute as closely as possible the tunes from yester-year thought to be long lost for the ages, as they attempt to re-create each tune, vocally and musically as best they can as it was previously originally presented and performed.

So don’t miss this live tribute to one of the most influential bands in bluegrass history. Come and see and hear the sound that is The Country Gentlemen Tribute Band. You’ll walk away in disbelief and awe at hearing what you thought you’d never hear again.

The Country Gentlemen Tribute Band has announced the return of a former member. Eric Troutman, who played bass for the group from 2011 until 2013, is returning to his old spot.

The band was formed in 2004 when Bill Yates, who was a member of the actual Gentlemen with Charlie Waller for 20 years, put it together to keep the songs and sounds of the group alive following Charlie’s passing. He led the band and sang many of the classic songs from the Gentlemen’s repertoire until his passing in 2015. He was assisted at the beginning by guitarist Mike Phipps, whose singing voice bears an eerie resemblance to Waller’s.

The Tribute Band continues on without Bill, maintaining his mission of having these songs performed live for all time.

Phipps still leads the group in Bill’s absence, and tells us that Eric will fill the spot occupied recently by Mike Conner, who has departed in order to stay closer to home during his retirement.

“Mike has been with us since 2015 and, with the exception of the late Bill Yates, has been our biggest cheerleader and CGTB enthusiast. He will be missed.”

The Tribute Band’s stockpile of song hasn’t changed since he left, so Eric shouldn’t have too much homework to do before stepping back into his old job in September.

Other members include Dave Propst on mandolin, Rick Briggs on banjo, and Geoff Gay on reso-guitar.

When Bill Yates passed away in January 2015, many people wondered what would become of the band he had created, billed as Bill Yates & the Country Gentlemen Tribute Band. He had assembled the group to perform the old songs the Gentlemen had recorded during his 20 year run with the band.

It turned out that Bill had previously asked the guys to keep the band together after he was gone, and so it shall be done. They will honor all the dates booked for this year and beyond, and are accepting bookings for this year and next, retaining the same material and flavor.

Announced over the weekend was news of a new bass player. Mike Conner of Roanoke, Virginia is stepping in to that role. In recent years Mike had worked with the reformed Travelers, and in a duo show with guitarist John Miller. He is taking the spot with the Tribute Band vacated by Larry Kirk.

Conner says that it’s an honor to be part of such a tribute.

“The original group is the reason I play bluegrass music. Kinda freaky that 44 years ago, I heard Charlie Waller, Doyle Lawson, Bill Emerson, and Bill Yates on stage at Lakeside Park in Roanoke ( they opened for Emmylou Harris), and although Skaggs and Rice played with her that night, it was the Gents that set me on fire.”

Bill Yates, lifetime bluegrass musician, bassist with The Country Gentlemen, and friend to everyone in the bluegrass community, died tonight after several weeks in the hospital. He was 78 years old.

He had been hospitalized earlier this month, suffering from a brain bleed. Doctors resisted surgery to relieve the pressure as his platelets count was dangerously low. Yates had appeared to be making a miraculous recovery when he passed Monday evening, January 26.

Born April 30, 1936 in Big Rock, VA, Bill started performing while still a young man. An early band, the Clinch Mountain Ramblers, included his brother Wayne and the great Red Allen. Prior to his twenty year stint with The Country Gentlemen, Bill worked with bluegrass legends Bill Monroe and Jimmy Martin.

The Award Winning Country GentlemenHe worked with the Gentlemen from 1969 until he retired in ’89, but returned to performing after his longtime musical partner, Charlie Waller, passed away in 2004. No longer playing bass, Bill sang and led the stage show with Bill Yates & the Country Gentlemen Tribute Band until his passing. They featured the Gentlemen repertoire Bill had played and sung with the likes of Doyle Lawson, Bill Emerson, Jerry Douglas, Jimmy Gaudreau, Charlie Waller and many others.

Don’t miss this live tribute to one of the most influential bands in bluegrass history. Come and see and hear the sound that is The Country Gentlemen Tribute Band. You’ll walk away in disbelief and awe at hearing what you thought you’d never hear again.

Bluegrass in the Park - Grottoes, VA

Contact Information
The Country Gentlemen Tribute Band welcomes the opportunity to speak with you concerning performing at your venue.

Complete the form to the right or send an email for more information.