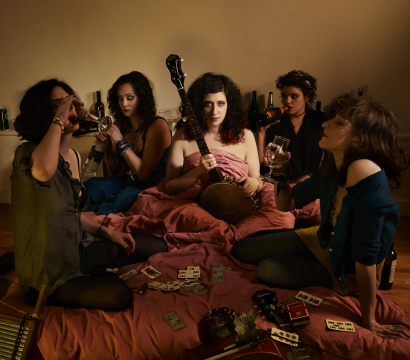 Dana Immanuel is a banjo-toting, whiskey-drinking, poker-playing singer-songwriter currently operating from a north London hideout from which emerges a sound more usually associated with the bayou, triple filtered through bourbon, washboard, electric guitar and a touch of alt-country eccentricity. With the all-girl Stolen Band, Dana has been getting feet stomping across the UK folk, blues, Americana and rock scenes.

Having been Classically trained at Oxford (she studied Latin, Greek and Philosophy, with a self-taught minor in guitar playing and country music appreciation), Dana set out to live the dream; she became a professional busker on the icon that is the London Underground. These formative years produced her debut album Character Assassination, a unique blend of folk, blues, old-fashioned jazz and Americana overlaid with lyrics featuring a surfeit of wit and a lack of punches pulled. A long stint working in the gambler's demi monde that is the poker industry contributed not insignificantly to the lyrical content of her second album, Dotted Lines, released in 2015.

Dana’s music reflects her eclectic influences, from Alice Cooper to Hank Williams, routed via the bluegrass turnpike around the township of alt-country. She is at home in the high-stakes casinos of Monte Carlo as in the basement bars of London, Paris and Amsterdam, and her eclectic experiences are reflected in her first album with the Stolen Band, Come With Me - avaialble now from all good online retailers. Combining insightful lyrics with catchy tunes, heartbreaking harmonies and a completely unique fusion of traditional folk instruments and screaming electric guitars, the Stolen Band's high-energy live show is not to be missed.

Come Down & Meet the Folks @ the Apple Tree

Fire in the Mountain Festival

Come Down & Meet the Folks

Before the Gold Rush

We Shall Overcome Weekend

Once Upon a Time in the West Festival

The Stolen Band perform live as a trio, quartet or five-piece band depending on requirements. Please contact us for more details.
Information Request