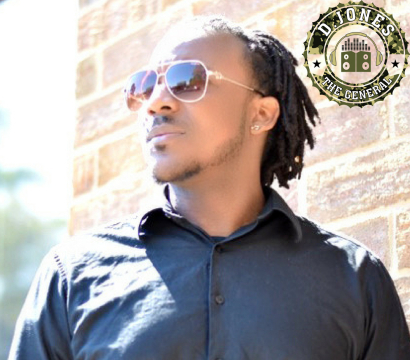 Darnell "D." Jones The General has been in the spotlight and seemed destined for greatness since the age of 10. The influences of Big L, 2pac, Bob Marley, Nas and Vybz Kartel amongst other greats have helped mold, inspire and influence "The General" in life as well as in the studio. Born and raised in Charlotte, NC, his star-studded charisma became apparent appearing in talent shows, building his fan base and awing crowds at an early age.

Record executives have been hot on his trail for the last five years. He held out to create the perfect package and is now independently releasing his next huge hit, "My Ting-a-ling" as a long-awaited reintroduction. A double threat in that, D. Jones is educated on the business and marketing side of developing his brand and the fact that he is still a true artist at heart makes it that much better for fans and investors.The knowledge and experience he gains from both make him unstoppable against all competition and ensure the best quality music and fan engagement possible, or as he would say, "More fiyah!!".

Throughout his career D. Jones found ways to incorporate his love for music into his education. He performed at major events such as health conferences along with headlining freestyle battles at the University of North Carolina. As a graduate of East Carolina University (2010); D. Jones plans to use experience with real-time concepts to take his music career to the next level.

In June of 2006, D. Jones began recording his underground album "Title Bout" in collaboration with Michael Foster of Swagger Ent. "Title Bout" became an instant success with demands nationwide. Producers Michael Ellis and Kazey Ellis of MKE Entertainment then signed D. Jones in November 2006 releasing "The General", a world renown album ahead of its time! This is when D. Jones learned how to be a true GLOBAL ARTIST. Cultural inclusion at its best is how The General himself would put it.

Now "The General" is BACK! Partnering with Creation Entertainment and DubElectro Global, D. Jones the General proceeds to march on and leave his stamp on the music movement.